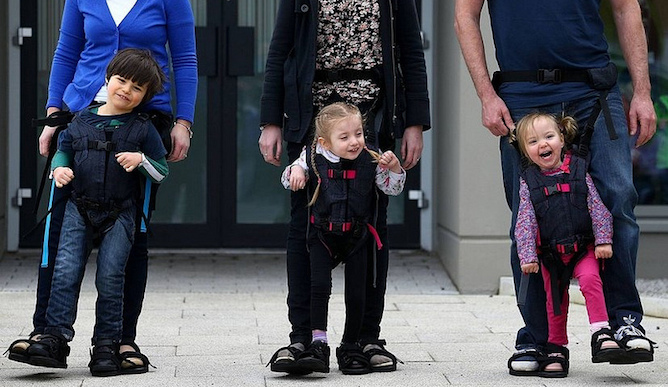 A Jerusalem child named Rotem was the inspiration for an invention that allows mobility-challenged little ones to experience walking, while tethered to an adult.

Rotem’s mother, musician Debby Elnatan, traveled to Ireland ahead of the April 7 launch of her Upsee product under the new Firefly brand of Irish company Leckey, and has been featured on ABC News, The Daily Mail, International Business Times and other media.

On April 1, 2 and 3, therapists and parents from around the world are welcome to join a live-streamed discussion on the Firefly website on how to use this mobility innovation to help children with disabilities experience the benefits of walking.

Elnatan tells ISRAEL21c that she began working on the device when her son, who has cerebral palsy, was two years old. He is now 19. The motivation was the advice of physiotherapists not to let little Rotem’s legs remain useless, but to “walk” him regularly to strengthen them and increase his awareness of his limbs.

“I cried for about a week or two, and then I started to walk him,” she relates in a promotional video for the product, her voice cracking with emotion at the memory of that time. “It’s very hard to walk a two-year-old, because you’re down on your hands and knees on the floor. I thought there had to be a better way.”

After trying several different approaches, she designed a harness that attaches to a belt worn by an adult. The system includes specially engineered sandals to hold the adult’s and child’s feet so that they step in synch. The child is fully supported yet both pairs of hands are free.

Once she put a prototype together, she began taking Rotem out to walk. The first few times his legs collapsed under him, Elanatan tells ISRAEL21c. “Gradually he built up his strength, and by the end of a year he could go out for two hours with me. Before that, we could do only a few steps at a time.”

The nitty-gritty design details were worked out in cooperation with a team of product designers, engineers, textile experts and therapists at Leckey, a well-known brand of equipment for children with special needs.

Elnatan explains that it took so many years for Upsee to be commercialized because she was busy raising Rotem and his older sibling, inventing all sorts of innovative gadgets, running music groups with her husband for people with special needs, and beginning a nonprofit called Full Family Rehabilitation with another mother of a special-needs child. When some Israeli relatives said they wanted to invest in her walking invention, she began contacting manufacturers.

She handpicked Leckey as her retail partner “because it is a company with its heart in the right place,” though first she insisted that Leckey launch an e-commerce platform for direct sales of products to make life easier for families of special-needs children. Firefly is that platform.

Leckey tested the device on families in the United Kingdom and North America.

Maura McCrystal of Northern Ireland, mother of five-year-old Jack, was one of the testers. She told The Daily Mail: “Last Sunday was a significant one for us as a family as it was the first time our son Jack was able to play football in the back garden with his dad, his brothers and our little dog Milly. To see Jack playing like any other five-year-old boy made me very emotional. Jack and his brothers so enjoyed it.’

Firefly’s clinical research manager and occupational therapist, Clare Canale, told the newspaper that the product improves special-needs family participation and quality of life in the short-term and also helps with physical and emotional development in the longer term.

“It has been humbling to see the progress and happiness the Upsee is creating; watching children do simple things for the first time, such as kicking a ball or playing with a sibling, is wonderful for everyone involved, but especially the families.’

Elnatan reports that Rotem today “has a big smile on his face. He’s a beautiful and happy boy and I think having a good childhood gave him confidence and a good outlook.”

Upsee costs about $540 plus shipping.