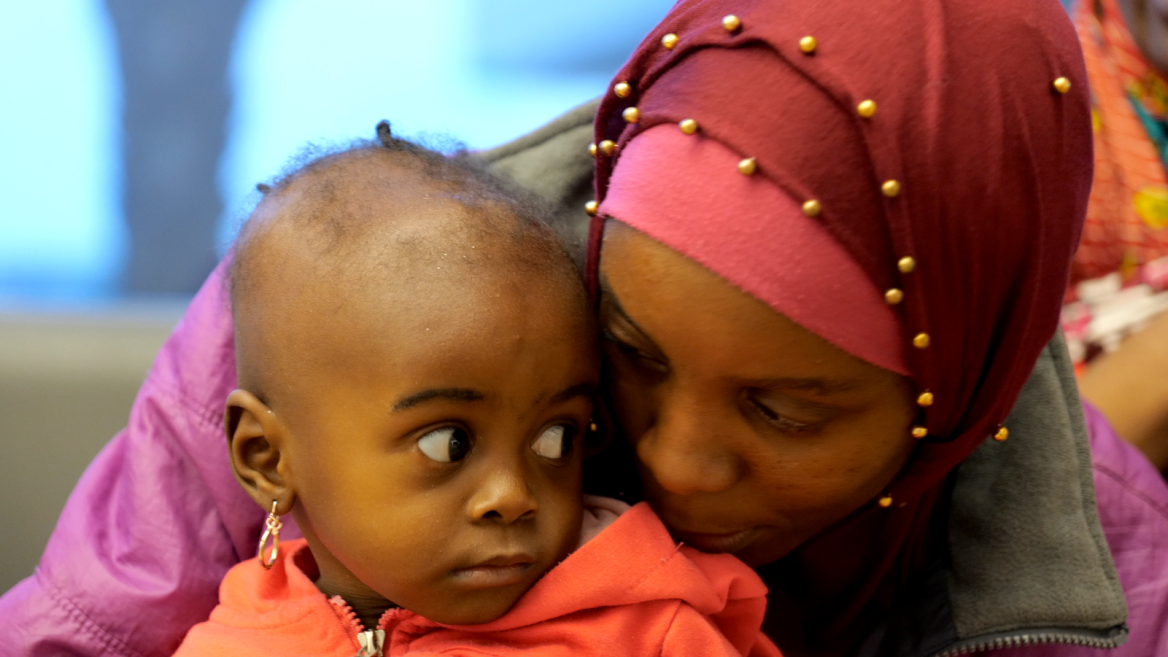 Balkis Makame Haji and her daughter Fatma arrive in Israel with Save a Child's Heart. Photo by Gil Naor

One-year-old Fatma is crying in her hospital bed, and for good reason – she’s hungry. She hasn’t eaten since the evening before, in preparation for the open-heart surgery she’s going to be wheeled into any minute.

Her mother, Balkis, is trying to soothe her. Nineteen years ago, she herself was in a similar position, waiting at the very same hospital — Wolfson Medical Center in Holon, Israel — for lifesaving surgery to repair a heart condition called patent ductus arteriosus.

But neither 26-year-old Balkis Makame Haji nor her daughter Fatma are Israeli. They traveled all the way from Zanzibar for the free surgery with the help of the Save a Child’s Heart non-profit organization. 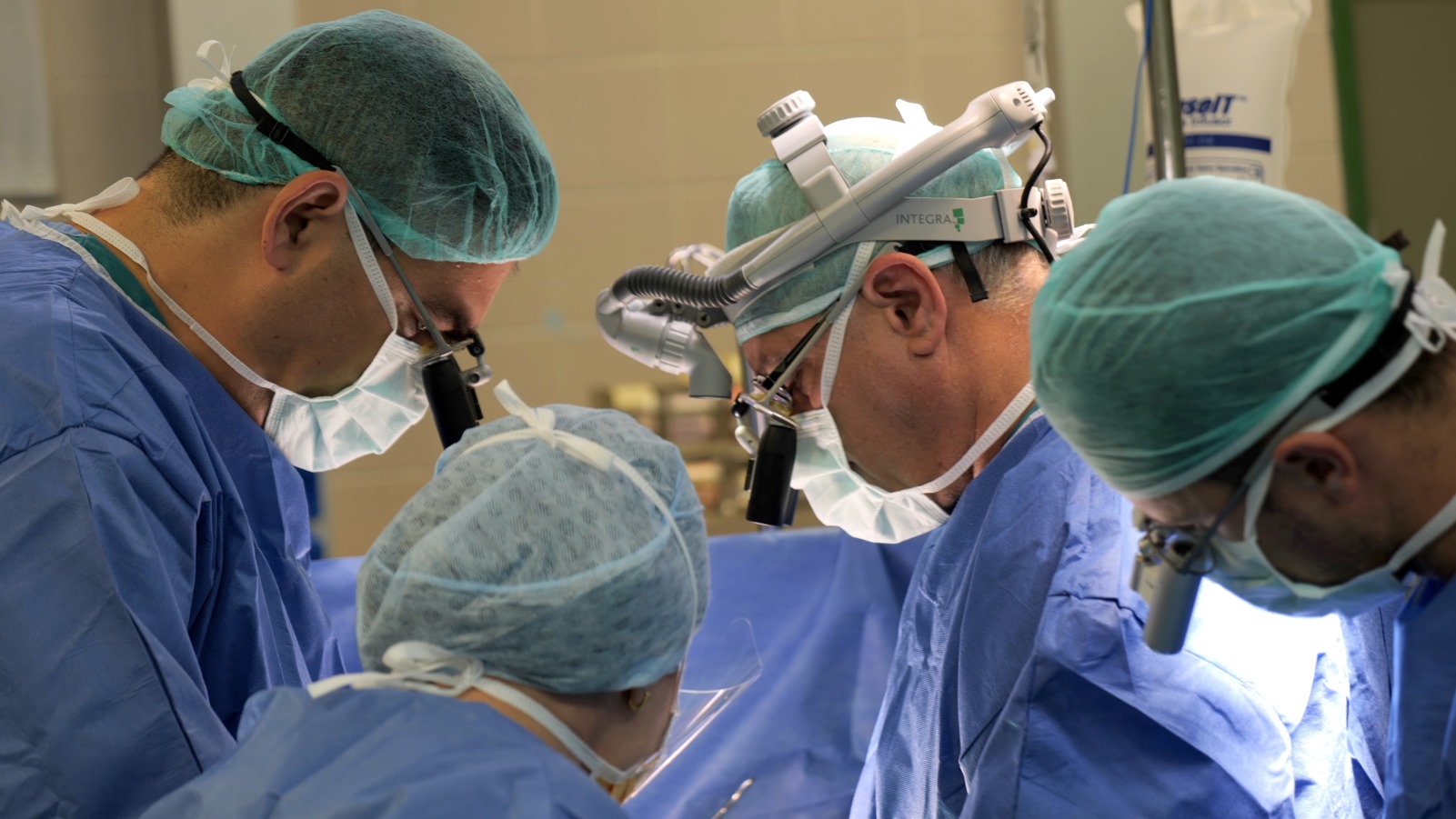 Doctors operating on Fatma at the Wolfson Medical Center. Photo by Gil Naor

Fatma, her mom says, seemed fine at birth, even weighing a hefty seven pounds. “But when she was three months old, she started to have frequent fevers, coughs and pneumonia. We went to the hospital.”

An echocardiogram revealed that the three-month-old suffered from the same condition her mom did as a child. “A lot of children have this problem,” Haji explains. “It’s dangerous because they don’t grow properly.” 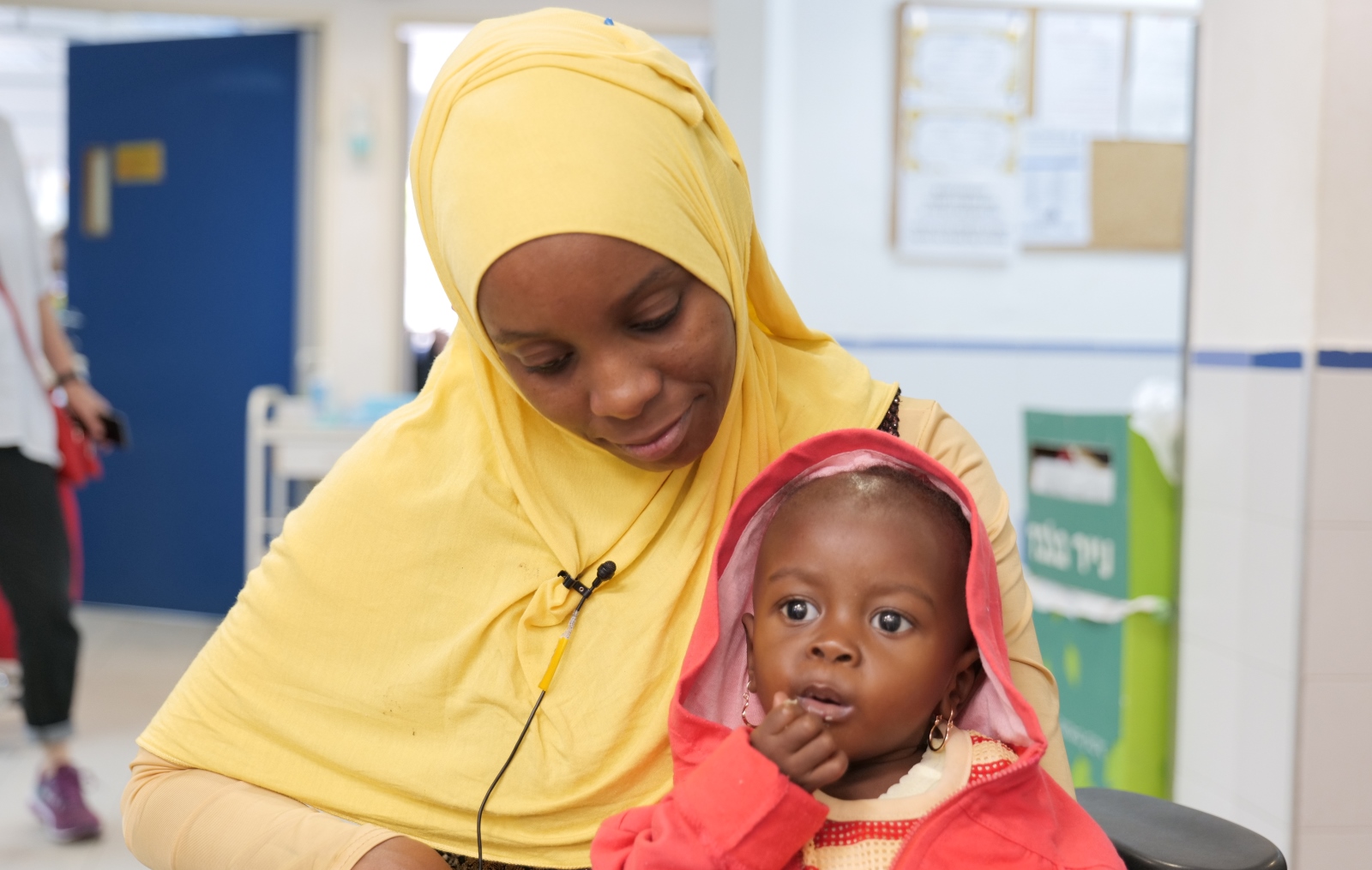 Save a Child’s Heart was on one of its overseas missions at the Zanzibar hospital at the time, screening some 400 local kids for heart problems. Upon examining Fatma and realizing that her mother was a previous patient of theirs, SACH doctors decided to fly her over to Israel for surgery. She is the 5,000th child to be treated through the organization.

The organization’s mission to Zanzibar was not a one-off.

Founded in 1995 by American immigrant and heart surgeon Dr. Ami Cohen, Save a Child’s Heart began operating at the Wolfson Medical Center, where he worked.

It started out when a pediatric cardiologist from Ethiopia asked for Cohen’s help with two children he was treating. They were sent over to Israel for surgery, sparking Cohen’s mission to help developing countries with pediatric cardiology care.

To date, the organization has treated 5,000 children from some 60 countries at Wolfson. It also trains doctors from these countries at the hospital, and regularly sends out medical missions to many places across the globe.

All this is carried out by some 100 doctors and nurses from Wolfson, who volunteer their time and experience.

One such volunteer is Dr. Alona Raucher Sternfeld, chief of pediatric cardiology for Wolfson and SACH. She explains that Fatma’s condition is caused by the remnant of a fetal blood vessel that should have closed soon after birth.

“There’s a lot of blood flow across this vessel and this causes pulmonary congestion,” she explains, noting that children with the condition suffer from respiratory distress, like the pneumonia syndromes Fatma was experiencing.

“All the caloric intake is wasted on this breathing effort,” she notes. This is the reason for Fatma’s low current weight of 13 pounds despite being an otherwise well-developed baby. 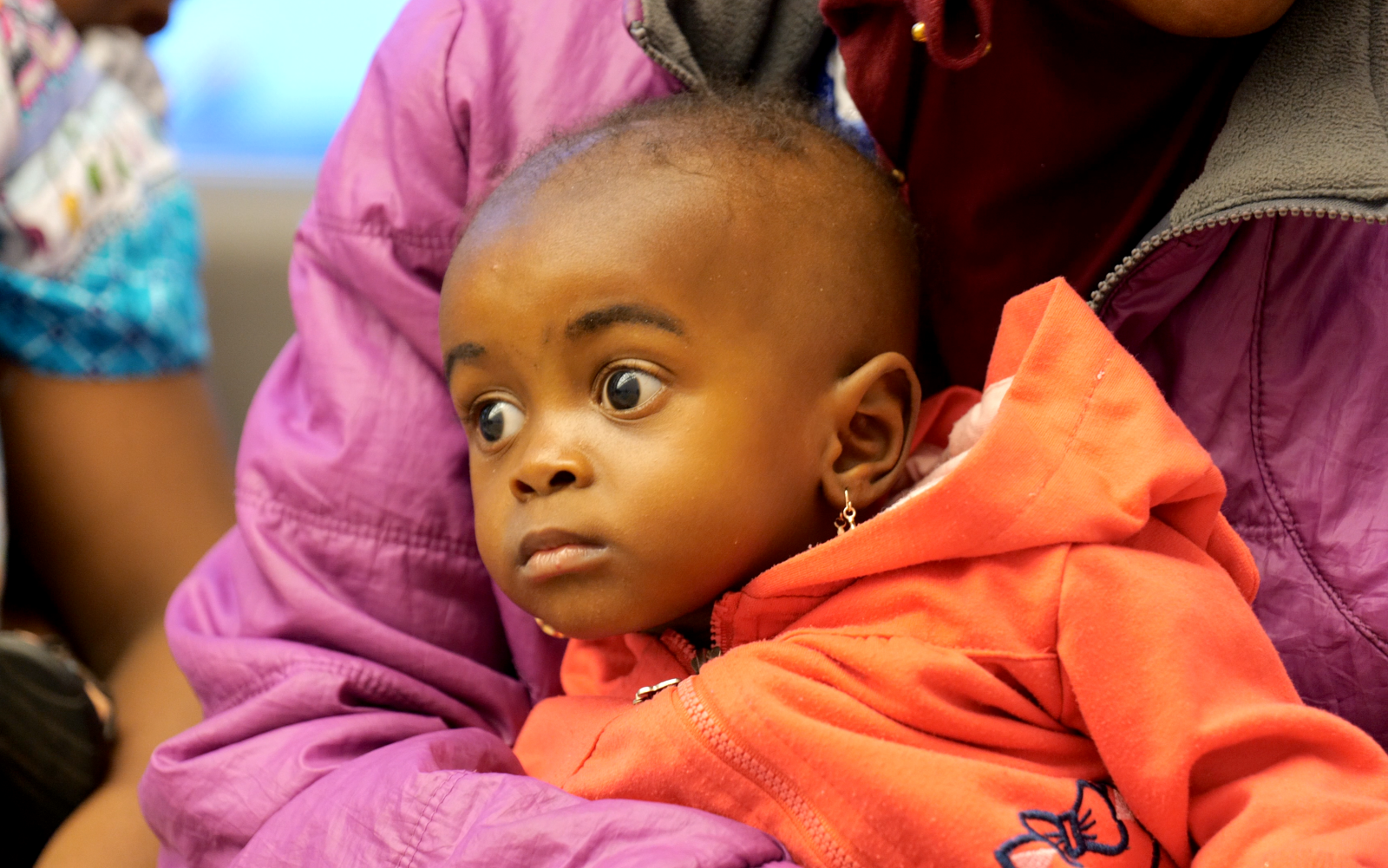 Recovering in a multinational setting

On the day ISRAEL21c visited her at the hospital, Fatma underwent open-heart surgery. “The surgery itself isn’t a very complicated one,” Sternfeld explains. “It involves opening up the chest from the left side and tying up the defect.”

“It’s lifesaving surgery. If the defect isn’t closed off, irreparable damage will be caused to the lungs,” she adds. “It’s about taking someone who without the repair would die or be very ill and making them healthy.”

“She’ll be a healthy child, just like her mom is healthy,” the doctor concludes. 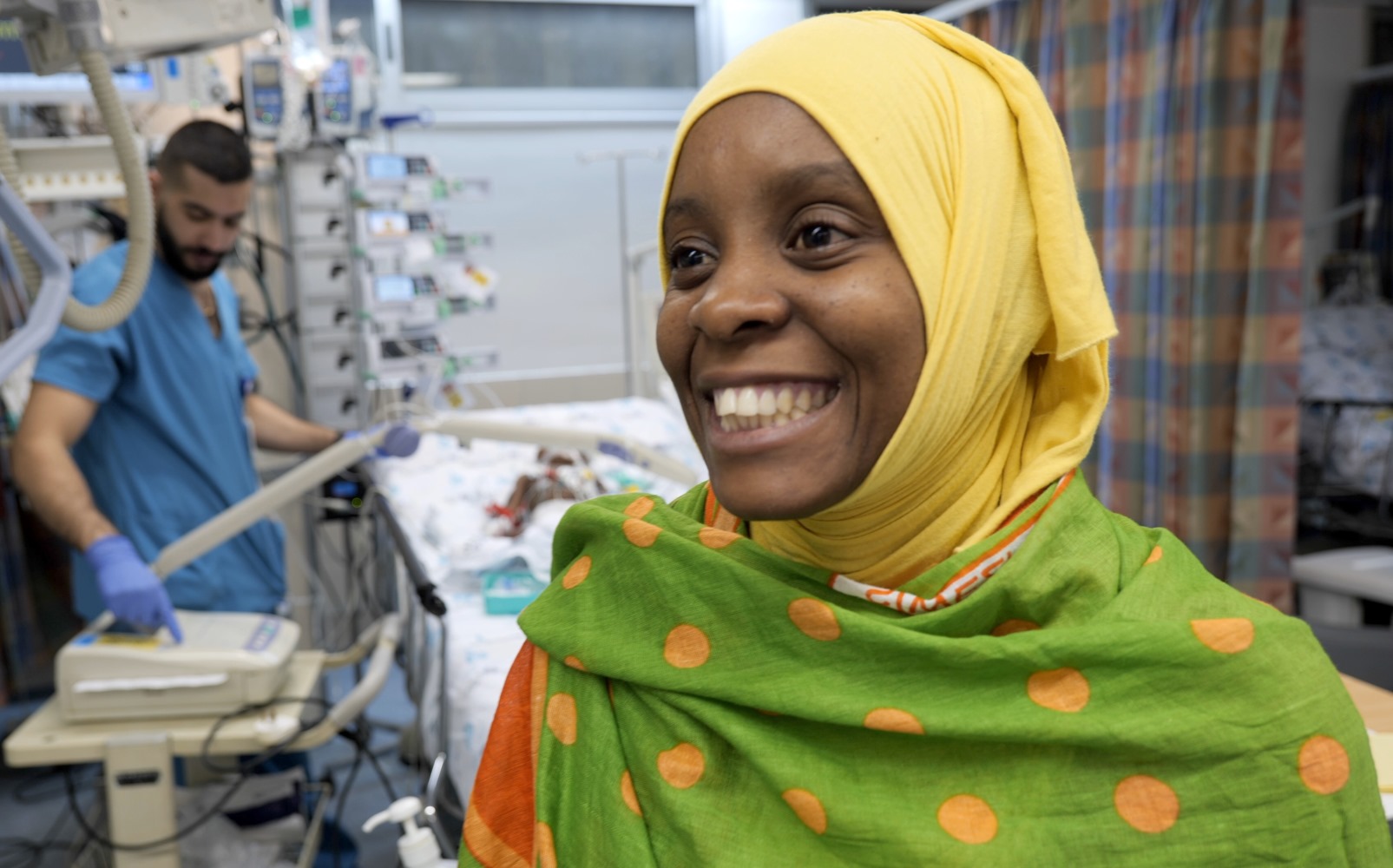 Fatma and Haji will have to stay in Israel for two to three months after the operation for recuperation and observation. For this purpose, SACH maintains a large, inviting building near the hospital that can house up to 60 people at any given time – kids and their accompanying parents and nurses, as well as trainee overseas doctors.

“It can be pretty busy and pretty noisy later in the day,” laughs house mother Laura Kafif.

The house runs on a tight but fun schedule, with three key words spoken by all its multinational inhabitants: kula and kulala (Swahili for “eat” and “sleep”), as well as the local balagan (“mess”).

Not too bad for a complex currently housing people from Zanzibar, Tanzania, Kenya, Ghana, Uganda, Kurdistan, Ethiopia and the Palestinian Authority all at the same time.

After breakfast, Kafif contacts doctors at the hospital about which kids need to go over for checkups or treatments. Volunteers from Israel and abroad come and play with the children for a few hours, either in the spacious house or in its beautiful garden.

Moms from different countries cook lunch for their group of compatriots. This, Kafif notes, ensures that everyone eats the foods they like and greatly comforts the kids away from home for so long. (Israeli schnitzels, she adds, did not prove to be a hit.)

More volunteers come over in the afternoon to play with the children until dinner and bedtime.

“We have a great volunteer team and they do different things with the children that they might not have had at home,” Kafif says. “Some kids we’ve had in the past have never done a puzzle.It’s a good place to recuperate because it’s fun. It’s not lying in bed not being able to move.” 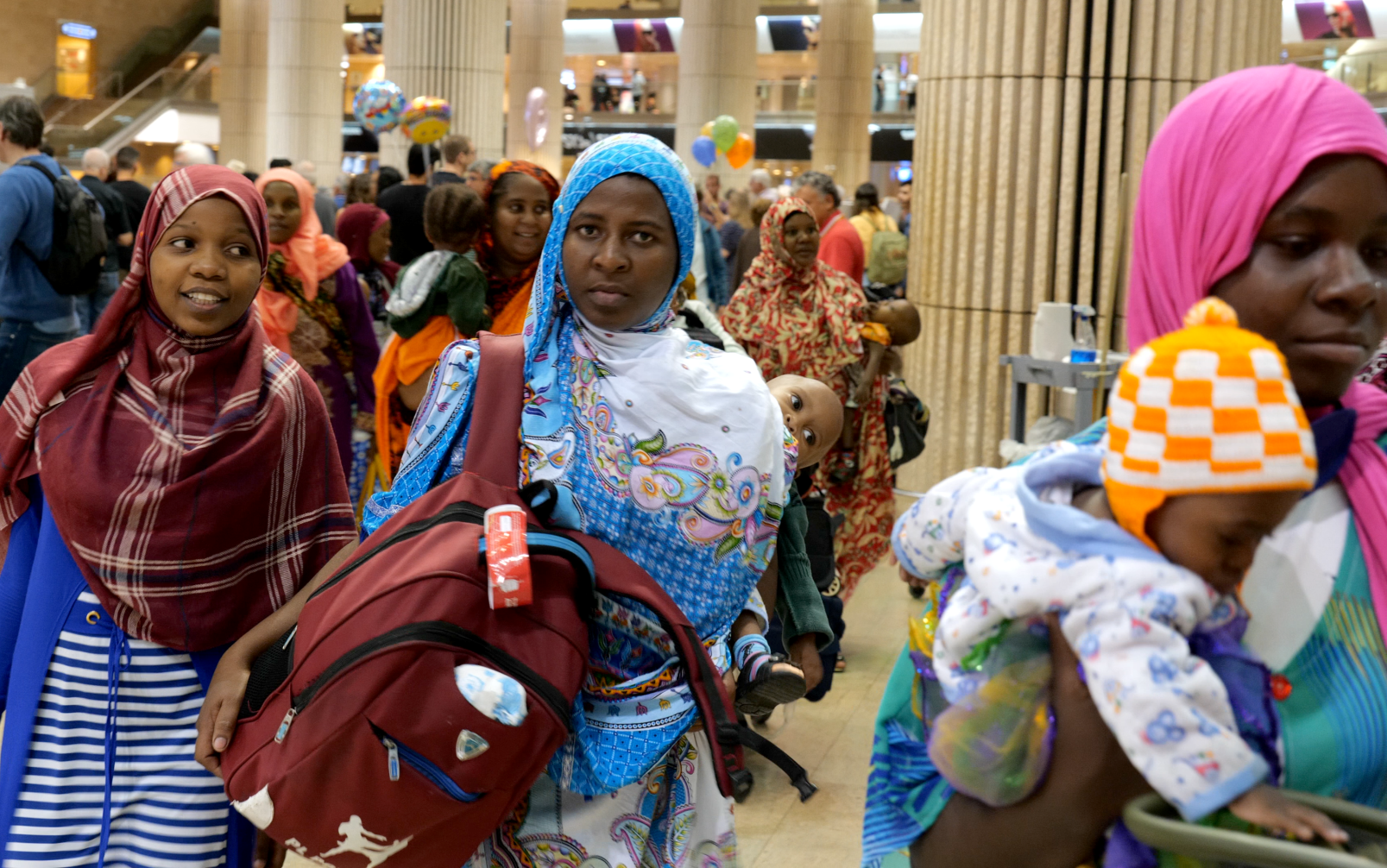 Mothers and children arrive in Israel from Zanzibar for treatment at Save a Child’s Heart. Photo by Gil Naor

This is especially true for some of the older kids who arrive in Israel without parents. This happens because SACH must prioritize how many people it can bring over, and the first concern is to fly over as many sick children as possible. The older kids are cared for by the nurse who arrives with each delegation, both in the hospital and during recovery. “It’s amazing how quickly they settle down,” Kafif reassures.

Israel at its best

“I believe Save a Child’s Heart represents Israel at its best,” he says. “At the core of the activities are universal values that are at least part of my DNA as a Jew, as an Israeli and as someone who immigrated from the UK to Israel and feels the need to showcase who we are.”

“If there’s a child we can help, then we’ll help,” he says of the different populations that the apolitical organization treats, noting that nationality does not make a difference. This is particularly true in the case of Palestinian kids, who have a special weekly clinic at SACH.

“It makes sense to help your neighbors,” he says. “We believe there’s a very strong element of trust-building between Israelis and Palestinians and that’s through health.”

“Even at the worst of times children have been coming across for treatment,” he adds.

The aid to children from around the world is never at the expense of local Israeli kids, Fisher notes. In fact, a new children’s medical center being built at Wolfson through the efforts of SACH will treat all pediatric patients from the greater Holon area.

Sponsored by donors Sylvan Adams, Morris Kahn, the Azrieli Foundation and the Ted Arison Family Foundation, the children’s hospital is set to treat some 700 SACH patients a year. And with the cost of flying over and treating each child standing at $15,000, the initiative requires around $10 million.

While the organization is non-governmental, it does receive support from the Israeli Ministry for Regional Cooperation and at times the Ministry of Foreign Affairs, as well as the European Union and other private donors. Fatma’s operation, for example, was sponsored by Canadian donors.

“As a member of the international community, Israel is giving to humanity, per se, and in many cases leading and leading by example,” Fisher says of SACH. “It’s very much based on the values of tikkun olam,” he adds, concluding that “children are our future.”

That’s certainly the case for Fatma.

“I’ll make sure to take good care of my child,” Haji says. “I want her to be a doctor – a heart specialist. That was my dream and I didn’t get the chance to go. I want to make sure she goes.”