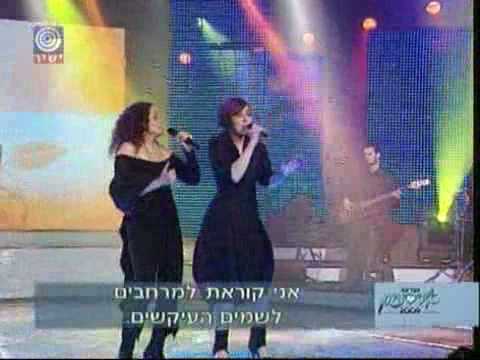 Noa and Miri Awad hope that by performing together they will show the world a true model of coexistence happening inside the borders of Israel.

It’s like the Grammy’s, MTV Awards and American Idol rolled into one: Every year European musicians and singers compete for the coveted Eurovision Song Contest granted to the best performing act around Europe. It was this contest that catapulted ABBA to international fame with Waterloo.

This year a Jewish-Christian duet will head to Eurovision to represent Israel. The two women — one a Jewish Israeli with roots in Yemen and the United States, and the other an Arab Israeli Christian, are hoping to sing their hearts out with a message for Middle East peace.

A star in her own right — in Israel and on international stages — Achinoam “Noa” Nini was approached by the Eurovision community asking her to sing at the 2009 contest. She said she would agree on one condition: if she could share the stage with Mira Awad her friend and long-time musical collaborator. For Noa, opportunities like this come and go. For Awad it is a golden opportunity to earn international acclaim.

Despite it being a difficult choice for Awad who has suffered criticism from the Arab population in Israel, the Palestinian Authority, and the rest of the Arab world, Noa tells ISRAEL21c that their performing together shows the world a true model of coexistence happening inside the borders of Israel.

“Beyond everything, it’s a great thing. It’s not some invention, some kind of clever ‘twist’ showing that an [Israeli] has managed to outsmart everyone again,” says Noa, responding to negative criticism she’s felt in Europe and from Arabs.

Neither an artificial pairing to show a fake display of friendship, nor a political statement, she says of her teaming up with Awad: “We’ve been friends for eight years. I was asked, and I said I only want to go together with her.”

Noa is one of Israel’s most popular singers. Born in Tel Aviv, she grew up in the United States, returning to Israel at age 17. Awad’s father is a Christian Arab from the Galilee region in Israel, where she grew up, and her mother is from Bulgaria.

“At the end of the day we’re giving an example of co-existence – what can be if people choose dialog over violence,” Noa tells ISRAEL21c. “Now we’ll see how much time it takes for the wheels to turn.”

Noa and Awad won’t be the first mixed Israeli group to hit the Eurovision stage, but with wounds from renewed fighting in Gaza earlier this year still open, theirs might be the most inspirational act yet, showing how people and art, not politics can be a bridge for peace.

Seeing a new side of the Jewish and Arab community

Israel has won the Eurovision contest a few times since it began participating in the show in 1973. Although geographically not located in Europe, Israel is a member of the European Broadcast Union and therefore qualified to enter.

Israel has won three times, once by Izhar Cohen and Alphabeta who won in 1978 with the song A-Ba-Ni-Bi, then in 1979 with the song Hallelujah performed by Gali Atari & Milk and Honey. The third and most controversial win came in 1998, when the transsexual Dana International won with her song Diva.

Noa and Awad hope their song Your Eyes,, which they co-wrote, might help people see their complicated reality in a different light. Sung in Arabic, Hebrew and English, the song carries a message of peace and hope, and it may win the duo first place at the awards happening this May in Moscow.

Speaking with ISRAEL21c, Noa says that there has been “all kinds of reactions” in the international community — some critical, some supportive. The criticism, she says, comes mainly from people with political motives.

These reactions are sometimes expressed on Noa’s Myspace site. Noa admits that Awad, who is shy to talk with the press, has had a hard time dealing with the negative publicity. She herself is more “experienced” having dealt with anti-Israel demonstrations outside her shows in Europe.

Singing with a peace plan in mind

Despite this, Awad is determined to go ahead. “I believe that by representing this country I am nailing to the wall my existence here,” said Awad in a BBC interview.

Personally, Noa deals with any political attacks by giving a prepared speech before she opens a show. “It also has the peace plan in it,” she says. “As I see it, there is a lot of propaganda and lies [in this world], with lots of evil powers, and I know it sounds like Darth Vadar,” admits the songstress. “I have my mantra,” she says, and it’s “one that involves mutual recognition.”

Will the message of faith, hope, friendship and peace be heard in Europe, where polarized views of the Israeli-Arab conflict appear to get stronger every year? Stay tuned for Noa and Awad’s debut performance at Eurovision, it’s bound to create a sensation.

And even if they lose Eurovision, they will still be winners in many people’s eyes.