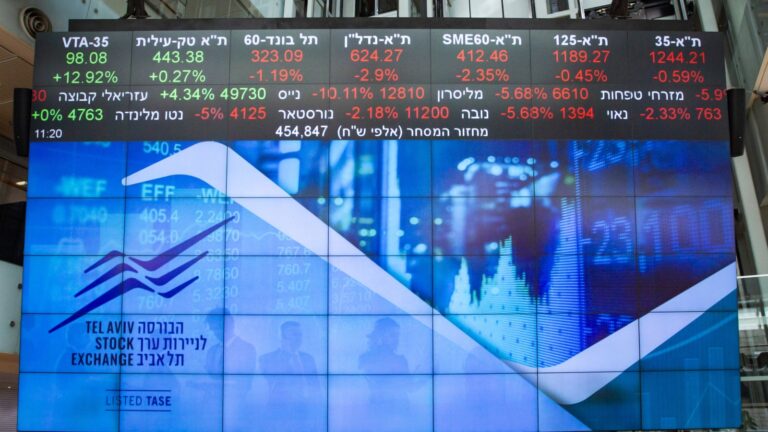 A stock market ticker in the lobby of the Tel Aviv Stock Exchange, March 15, 2020. Photo by Flash90

Israel’s high-tech sector accounted for over half of the country’s total exports, for the first time, in 2021.

But it faces an uncertain future, largely because of the government’s low-level investment in long-term R&D, according to an Israel Innovation Authority (IAA) report, “The State of High-Tech 2022,” published yesterday (May 11).

The good news is that high-tech made up 54% of all Israel’s exports last year, but the report warns that Israel must broaden its focus beyond what it does best – software-based technology – and become more diverse.
The report shows that more than one in 10 workers — an estimated 362,000 people — are now employed in high-tech.

Israel has its highest ever number of unicorns – over 40 private companies valued at over $1 billion – and last year saw a record 75-plus companies initiate IPOs (initial public offerings). There were 88 mega-fundraising rounds of more than $100 million in 2021.

Israel ranks first among the 38 member countries of the OECD for the percentage of GDP spent on research and development (5.44%). And capital investment in startups reached a record $27 billion.

Despite these positive statistics, challenges to Israel’s innovation hub are “manifold and intensifying,” the report warns.

The IIA recommends that the sector diversify beyond its current areas of success, recruit a more diverse workforce and expand beyond the Tel Aviv area. Crucially, it must attract more government investment in R&D and collaborate more closely with academic institutions. 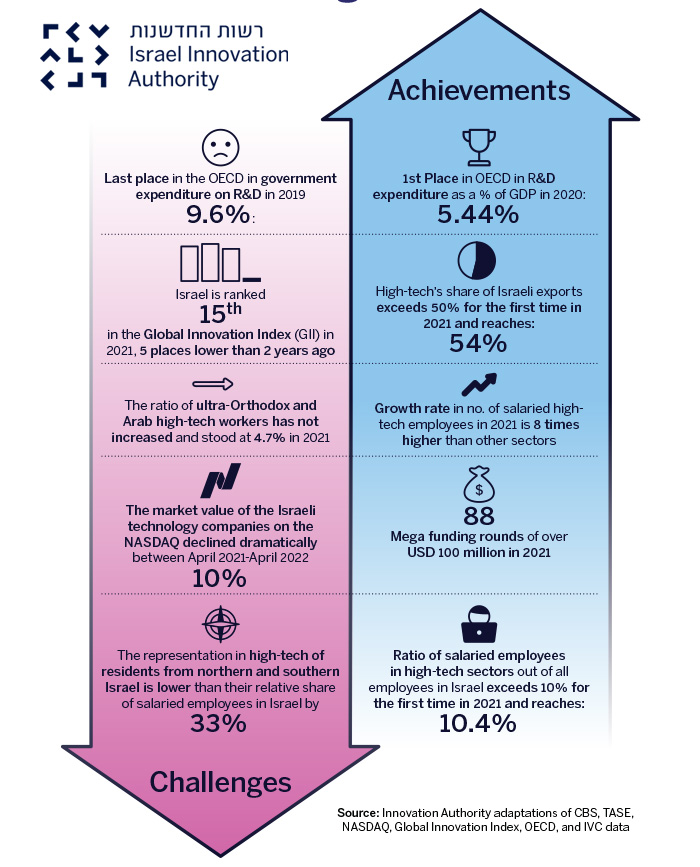 Among the report’s less-encouraging statistics: The market value of Israeli tech companies on Nasdaq fell by around 10% last year. The country slipped to 15th place in the Global Innovation Index for 2021. And despite leading OECD countries in terms of overall R&D investment, Israel placed last in government investment (9.6% in 2019).

Dror Bin, CEO of the IIA, said there is no guarantee that Israel’s high-tech industry will continue to grow and lead the world.

“The successes of Israeli high-tech blur the challenges we may face in the future. The report shows that the continued prosperity of the industry is under threat from industry over-concentration, both geographically and demographically,” Bin said.

In addition to “relatively low government investment in groundbreaking R&D,” he blames “regulatory and bureaucratic obstacles” that have forced Israeli companies to transfer activities or operations overseas.

And despite Israel’s reputation as the Startup Nation, the report says only 8% of high-tech employees work at what it defines as “young startups.” The proportion of ultra-Orthodox and Arab high-tech employees remains static at 4.7%. Only a third of the high-tech workforce live in the north or south of the country, beyond the central economic hub, with the sole exception of Haifa.

UNCOVER ISRAEL - Get the ISRAEL21c
Weekly Edition free by email
Sign Up Now!
Bring Israel's story to life.
Millions of people around the world rely on us to gain a deeper understanding of Israel. We are the trusted source for original content you won't find anywhere else.
You can make a difference. Donate today to support journalism that brings Israel’s story alive.
SUPPORT ISRAEL21c
Read more on:   News, Technology, Startups, Israel Innovation Authority, High tech