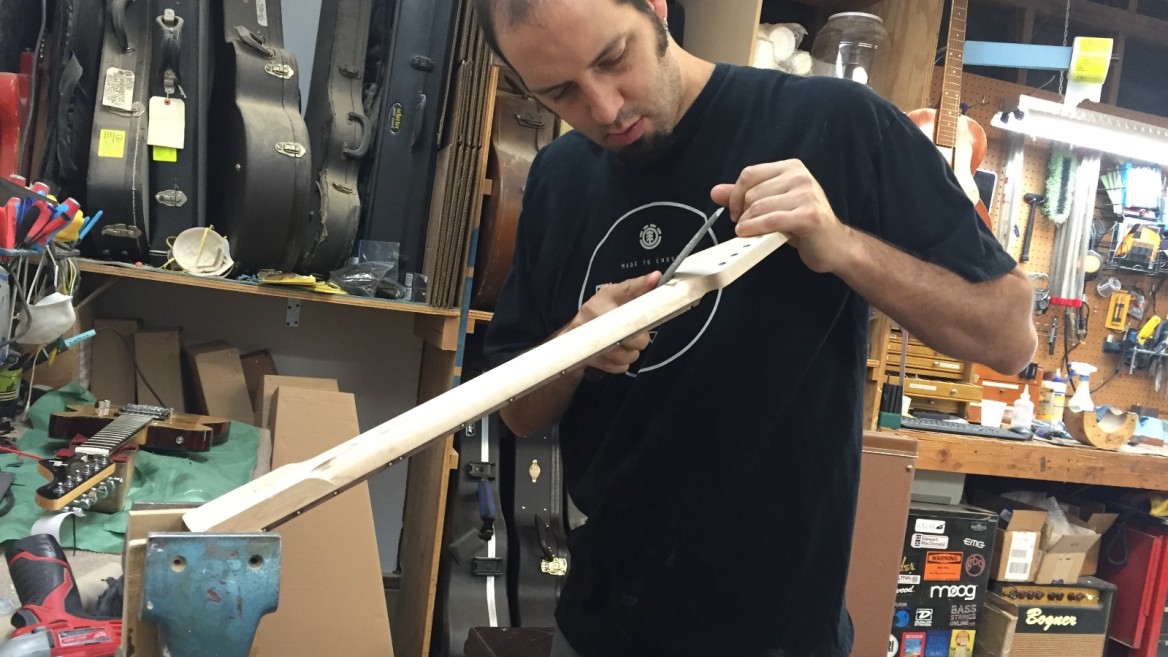 Avishay Shabat in his workshop. Photo by Stacey Shabat

Avishay Shabat didn’t want to be a drill sergeant. He wanted to play and fix guitars. Yet his mandatory Israeli military service unexpectedly gave him the tools to succeed at what he loves most.

“Something about our culture makes us real go-getters,” says the proprietor of Shabat Guitars  in West Hills, California. “The army was a really good thing for me. It makes you feel, after the fact, that there’s not a lot you cannot do.”

We more often hear about Israeli go-getters seeking their fortune in Silicon Valley. For Shabat, the magic happens in San Fernando Valley, about 350 miles south of America’s startup capital. This is where he is making his name as a luthier, a guitar-maker.

“This is an unusual business, and that’s why I’m in it — because it’s cool,” says Shabat with a smile, speaking with ISRAEL21c over Skype. Avishay Shabat at work in his studio. Photo by Stacey Shabat

It takes 25 or 30 hours of work and drying time over two weeks to yield a finished custom guitar for customers in Europe, Japan, New York or Los Angeles. Each of these beauties sells for $2,000 to $3,000.

“The main difference between custom and mass-produced is better wood selection. The wood is crucial to creating a stable instrument and affects the tone of the guitar,” says Shabat. “And the attention to detail and handcraftsmanship is way better than something that goes through a lot of hands in a factory. This is my formula and people seem to really dig it.” Born in 1978 and raised in Jerusalem, Shabat has made guitars for musicians including Chris Traynor of Bush and his old buddy from Israel, Sean Hurwitz  of Smash Mouth. Shabat is the techie of choice for Nick Hexum of 311 and Australian artist Irwin Thomas (Jack Jones), among others.

Wanted to be a rock star

Shabat became enamored of guitar-playing in his teens, and set up a recording studio in his parents’ home. “Then the army called. I wanted to be a rock star but I became a drill sergeant,” he says.

Following his discharge, Shabat studied for two years at the Yoav Gera School of Sound in Tel Aviv. He worked with Hurwitz at the sound-and-lighting company Musical Connection and then at the Yellow Submarine music venue in Jerusalem, where he got acquainted with the stars of Israeli contemporary music.

Four years later, during a music festival in Germany, he bought a bass guitar that turned out to be a lemon. “And this is where the journey begins,” says Shabat.

“The neck of that guitar was unplayable and I looked for a way to fix it. In Ramat Hasharon, I found a luthier, Jacob Algranati, and he said it would be a very expensive repair. He then told me he was soon going to open Israel’s first luthier school and if I wanted to sign up, he could guide me through the process of fixing that guitar and building my own instrument. I liked that idea, because I always liked to take stuff apart and see how it works.” 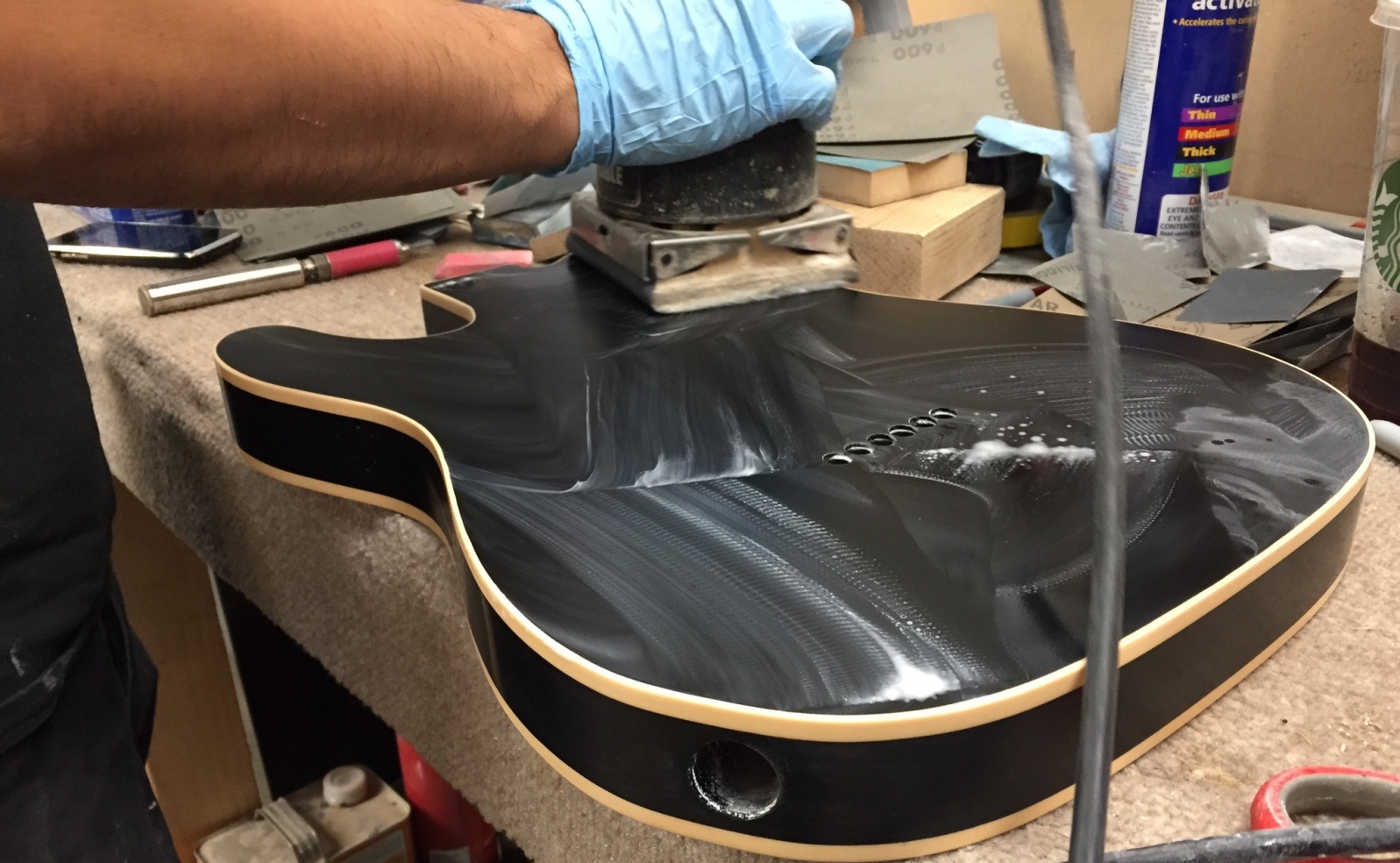 A Shabat guitar in the making. Photo: courtesy

A few months later, Shabat was the first to register for Algranati’s course. “It was the best time ever. I got so hooked on that, I started setting up my own little shop and buying tools.” Soon he was the guitar techie for leading Israeli musicians such as Shalom Hanoch and Ronnie Peterson. “It was a great experience to learn how to keep guitars in shape for the pros.”

He also started building guitars, “but it was hard because most parts had to be ordered from the US and I had to wait for them to arrive. Then I went on a trip to San Francisco and New York with my then-girlfriend. We drove to LA and went to see Sean. I inquired about the guitar business there and asked if I should try my luck. He said the market would be great for me.”

Shabat trained his brother to take over the recording studio in their parents’ house, and in 2007 he took $10,000 in savings and headed to Hurwitz’s place in Los Angeles. He worked at nightclubs as a sound engineer and helped install sound systems, and then became an apprentice luthier. After four years, he had gotten to know the industry and gained exposure and credibility. Having just gotten married, he felt ready to move on.

Shabat established his own business, initially called Guitar Groomer, in his home in West Hills. Before long, business began booming and he had to hire assistants. Since 2012, Shabat has been crafting guitars and bass guitars under his own label and for several other brands. A growing list of dealers carries his instruments.

“Although it’s still a young company, the activity is really amazing and I’m very busy,” he reports. “I’m not striving to be Fender. I like the personal attention and the boutique vibe.”

Shabat has another reason to be busy these days: three-month-old Levi Django Shabat, whose middle name honors French gypsy jazz guitarist Django Reinhardt. He tries to speak to his baby only in Hebrew, to better prepare him for biannual visits to his family in Israel.