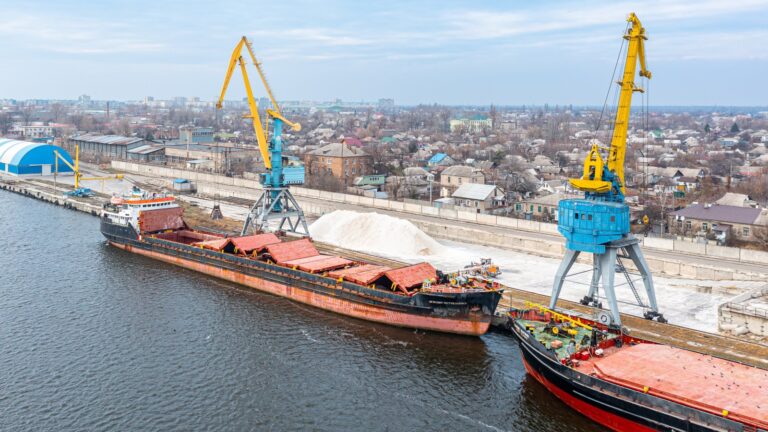 A large dry cargo ship moored at the commercial port in Dnepr, Ukraine. Illustrative photo by ZagAlex via Shutterstock.com

That’s where Russian cargo vessels have been observed smuggling allegedly stolen grain from Ukraine to sell it at a profit.

Windward uses artificial intelligence and machine learning to predict what’s happening on the open seas. The company has now issued a report detailing previously unreported information on five vessels engaging in “dark activities” and ship-to-ship (STS) operations in the Kerch Strait in June 2022 in what Windward says appears to be “a coordinated effort to launder grain allegedly stolen from Ukraine.”

The 3-kilometer Kerch Strait connects the Black Sea and the Sea of Azov.

Windward found a 160% increase in dark activities in the Black Sea by bulk carriers flying either the Russian or Syrian flags when comparing July 2020 to June 2021 with July 2021 to June 2022. 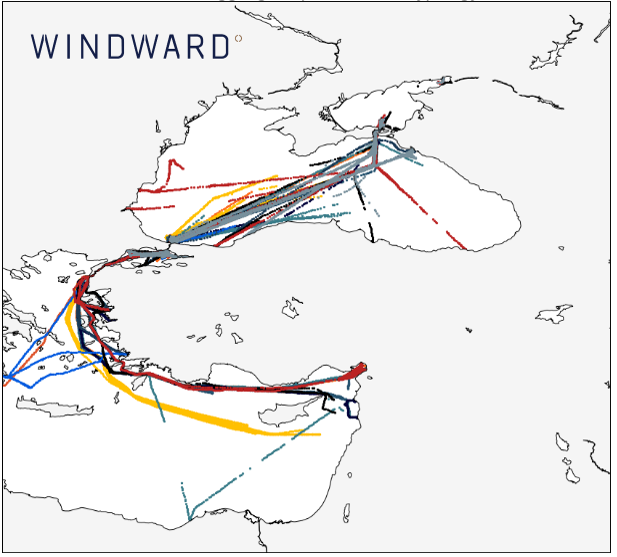 In addition to dark activities, STS meetings – mostly between Russian-flagged cargo vessels and other ships operating under “flags of convenience” – appear to be increasing, with each Russian vessel connecting with one to four cargo and services vessels simultaneously in the Kerch Port’s offshore waiting area.

Windward reviewed the routes for grain smuggling and found they mostly flowed through the Kerch and Bosporus Straits before heading to Syria or Turkey.

How do they do it?

Ships disable their automatic identification systems, concealing the vessels’ locations and operations at sea. While this happens naturally from time to time – usually due to lack of reception or bad weather – “going dark” as these Russian ships appear to be doing “is an intentional choice to avoid transparency,” Windward reports.

Dark activities on the seas have been used for years to smuggle crude oil. But this is the first time they seem to have been applied to grain smuggling.

The number of dark activities continues to increase.

From July 2021 to February 2022, the average number of monthly visits by bulk carriers was 4.75. Since the war broke out, the monthly average has gone up to 10 visits.

As for STS operations, Windward reported that, on June 10, 2022, there were five vessels engaging in this activity in the Kerch Strait.

“It is now clear to every shipping stakeholder dealing with trade that deceptive shipping practices and risk mitigation are relevant to all vessels and types of commodities – oil is no longer the main driver of the maritime economy,” the Windward report concludes.

Windward warns that the trend is expected to grow as the conflict continues.

The full report can be downloaded here.

UNCOVER ISRAEL - Get the ISRAEL21c
Weekly Edition free by email
Sign Up Now!
Bring Israel's story to life.
Millions of people around the world rely on us to gain a deeper understanding of Israel. We are the trusted source for original content you won't find anywhere else.
You can make a difference. Donate today to support journalism that brings Israel’s story alive.
SUPPORT ISRAEL21c
Read more on:   News, Technology, Shipping, Ukraine, Windward