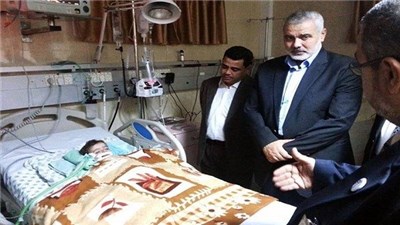 Ismail Haniyeh visits his granddaughter in a Gazan hospital. (Social media networks)
The granddaughter of Hamas Prime Minister Ismail Haniyeh was evacuated to an Israeli hospital for medical treatment of a serious digestive infection that had damaged her brain. After her condition was deemed incurable, Aamal Haniyeh, the daughter of the Hamas leader’s son, Abdel-Salam Haniyeh, was returned to Gaza.

Abdel-Salam announced on his Facebook page that his daughter was going to Israel for medical treatment.

“Dear brothers, Amal has been transferred inside the Green Line,” he wrote. “I pray to Allah for her recovery.”

“She was brought into Israel, but returned to Gaza after her condition could not be stabilized. She is in critical condition,” Major Guy Inbar, a spokesman for the Israeli Coordinator of Government Activities in the Territories (COGAT), told The Times of Israel.

Reports in the Arab media cited that the girl’s condition deteriorated while in a Gaza hospital and her family decided to seek additional care in Israel.
The Egyptian daily Al-Ahram reported that the toddler was suffering from severe inflammation of the gastrointestinal system affecting her nervous system.

COGAT organized that the baby be brought to Schneider Children’s Medical Center in Petah Tikva. She was accompanied by her maternal grandmother.

“We’re pinning our hopes on Allah, as she is still in a state of clinical death,” the Hamas prime minister’s son wrote on his Facebook page.