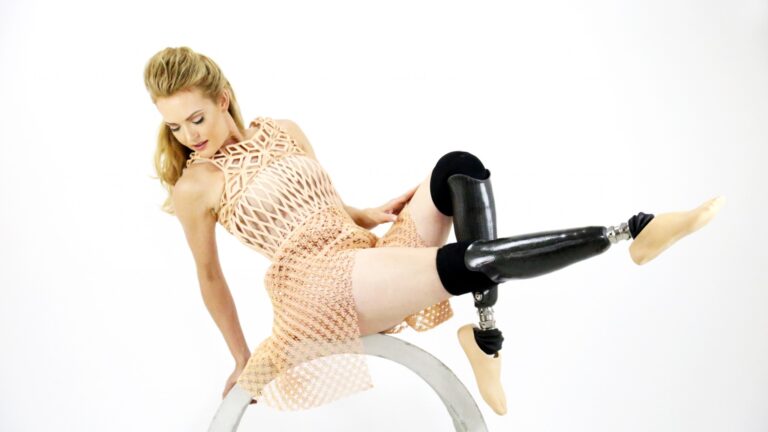 Israeli designer Danit Peleg’s latest 3D dress caught the world’s attention when US snowboarder Amy Purdy danced a samba with the KUKA robot at the Opening Ceremony of the Paralympics in Rio.

The dance explored the relationship between humans and technology. Peleg’s 3D fashion also spotlights new technologies and their relationship to fashion.

“When I think of the Paralympics, I think of these amazing athletes who have dedicated their lives to their sport, and I also think of the cool cutting-edge technology used during the games that help these athletes compete at their fullest abilities,” Purdy told Yahoo Style. “This dance represented that idea.”

Peleg says she took inspiration from Sandro Botticelli’s painting, The Birth of Venus.

“Amy contracted Meningitis at the age of 19 and had to have her legs amputated below the knee. In my view, the story of what happened to Amy is like a rebirth,” Peleg writes on her blog. “The many diamond shapes present in the painting’s composition and the nude color of Venus, gave me a direction for the dress.”

Peleg’s dress, made of FilaFlex filament, was entirely 3D printed and made with help from Gerber Technology.  It took 120 hours to print on Witbox home printers.

“In November 2015, the creative team of the ceremony reached out to me to commission a dress for one of their segments,” says Peleg on her website. “It is an incredible opportunity to design a 3D printed dress that will be seen in movement by hundreds of millions of people around the globe. I was honored to have been chosen to be the designer of Amy Purdy’s dress for her dance at the Paralympics Opening Cermony in Rio 2016.”

“The dress was inspired by me, and the material matches the material of my feet,” Purdy told Yahoo. “It was custom fit to my body, and throughout the process I made suggestions to make it shorter, tighter and looser in spots.”

Peleg’s first collection of 3D printed fashion, created as part of her Fashion Design degree at at Shenkar College of Engineering and Design, went viral in 2015.

The Israeli designer says she was so inspired by the Paralympics’ dress that she is working on a full collection of five looks which she will unveil in the coming weeks.