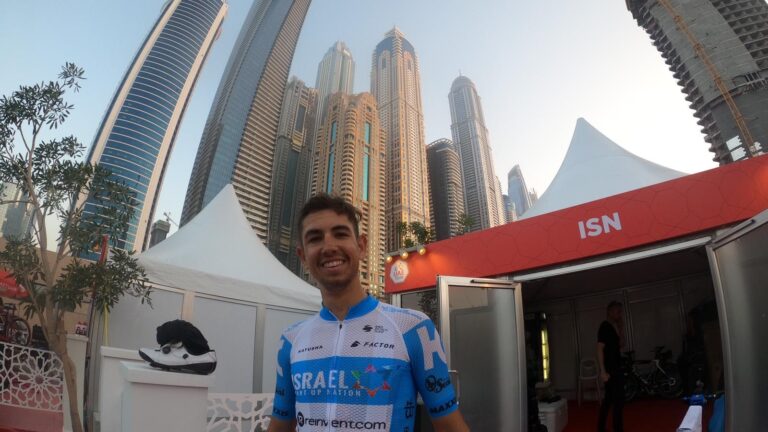 In a sign of warming ties between Israel and the United Arab Emirates, Israel’s only professional cycling team will compete in the UAE Tour, becoming the first Israeli team to participate in the Middle East’s top cycling race.

The Israel Start-Up Nationteam arrived in Dubai this week in preparation for the race, which begins on Sunday.

The bridge-building began almost immediately when the Israeli team entered the Al Qudra Cycling Park for training. After some initial shock expressed by other cyclists upon seeing the team logo, some waved and even asked for selfies, said 23-year-old Israeli rider Omer Goldstein.

“Until recently, it would have seemed like an unrealistic dream,” Goldstein said. “This is the victory of sports and being here is proof of that.”

The 148-kilometer race will take the cyclists through all seven countries in the United Arab Emirates, traversing both desert and city streets, from the training site in Dubai to the finish line in Abu Dhabi.

“I believe that we have a realistic chance, even though this is a race at the very highest level and we will be facing some of the top sprinters in the world,” Barbier said. “We are making history by racing here and it shows you that sports can break every barrier.”

Israel Start-Up Nation will make history again in June when it becomes the first Israeli team to compete in the Tour de France – the world’s third most-watched sporting event, after the Summer Olympic Games and soccer’s World Cup.

Israel Start-Up Nation (established in 2015 as the Israel Cycling Academy) is co-owned by Canadian-Israeli businessman Sylvan Adams. Adams was also behind bringing the Giro d’Italia, one of cycling’s three Grand Tour races, to Israel. Guy Sagiv became the first Israeli to finish such a race in 2018. In 2019, another Israeli Guy – Guy Niv – competed in the Giro.