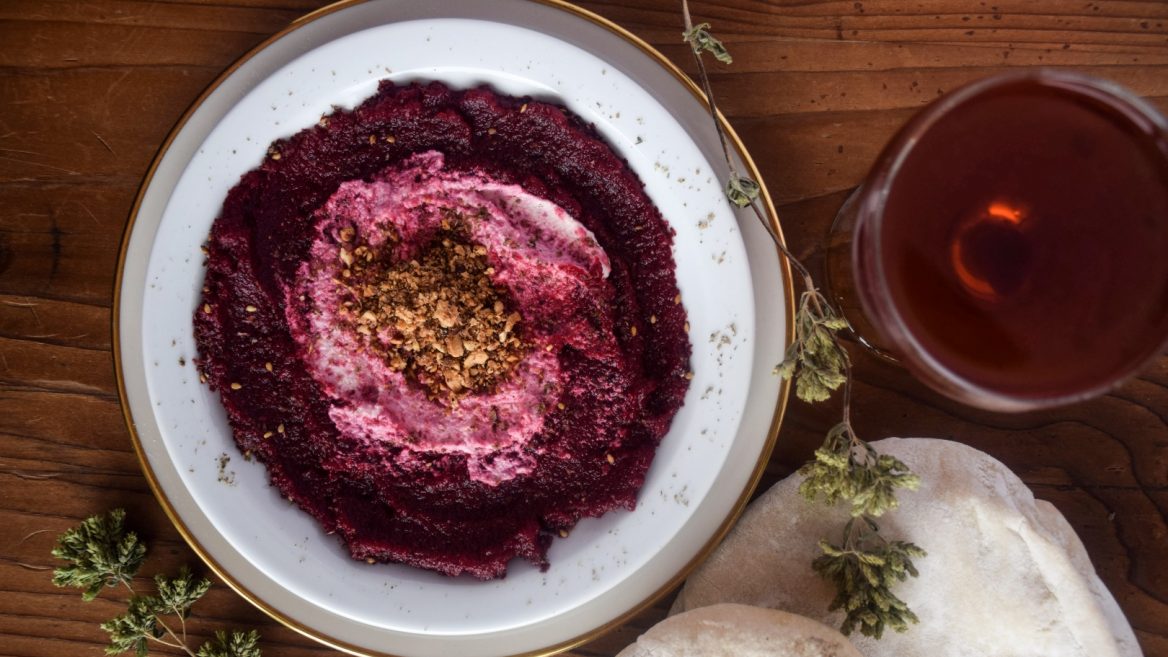 Tal Caspi didn’t expect to start a trend when he set up his Gonzo Falafel and Hummus food truck in Portland, Oregon, about a decade ago. He was simply craving the taste of home.

“I was hungry, and at that point there was no Israeli food here so I started to cook it for myself and hoped somebody else would like it too,” says Caspi, 39. “But it was popular very quickly.” 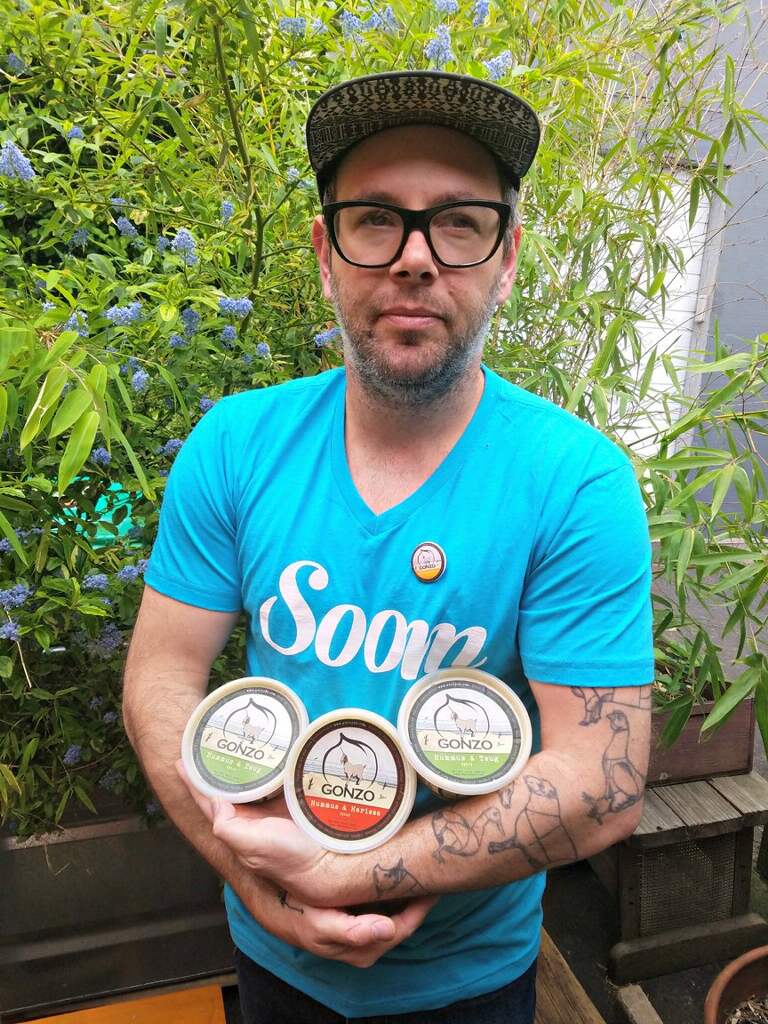 If you want to take the pulse of culinary fads, put your finger on Portland. This uber-hip northwestern city consistently rates as one of America’s top foodie destinations.

So it’s significant that Aviv is the only vegan Israeli restaurant in Portland, a city where plant-based eateries are plentiful and Israeli/Middle Eastern cuisine is well represented.

Caspi says he’s brought a large helping of authenticity to the scene.

“People understood the basic concepts but not the details and that really bothered me,” he tells ISRAEL21c. “Like when I asked for hot sauce in a Middle Eastern restaurant it was Mexican or Thai hot sauce instead of beautiful Yemenite s’chug, perfect for falafel and hummus.” 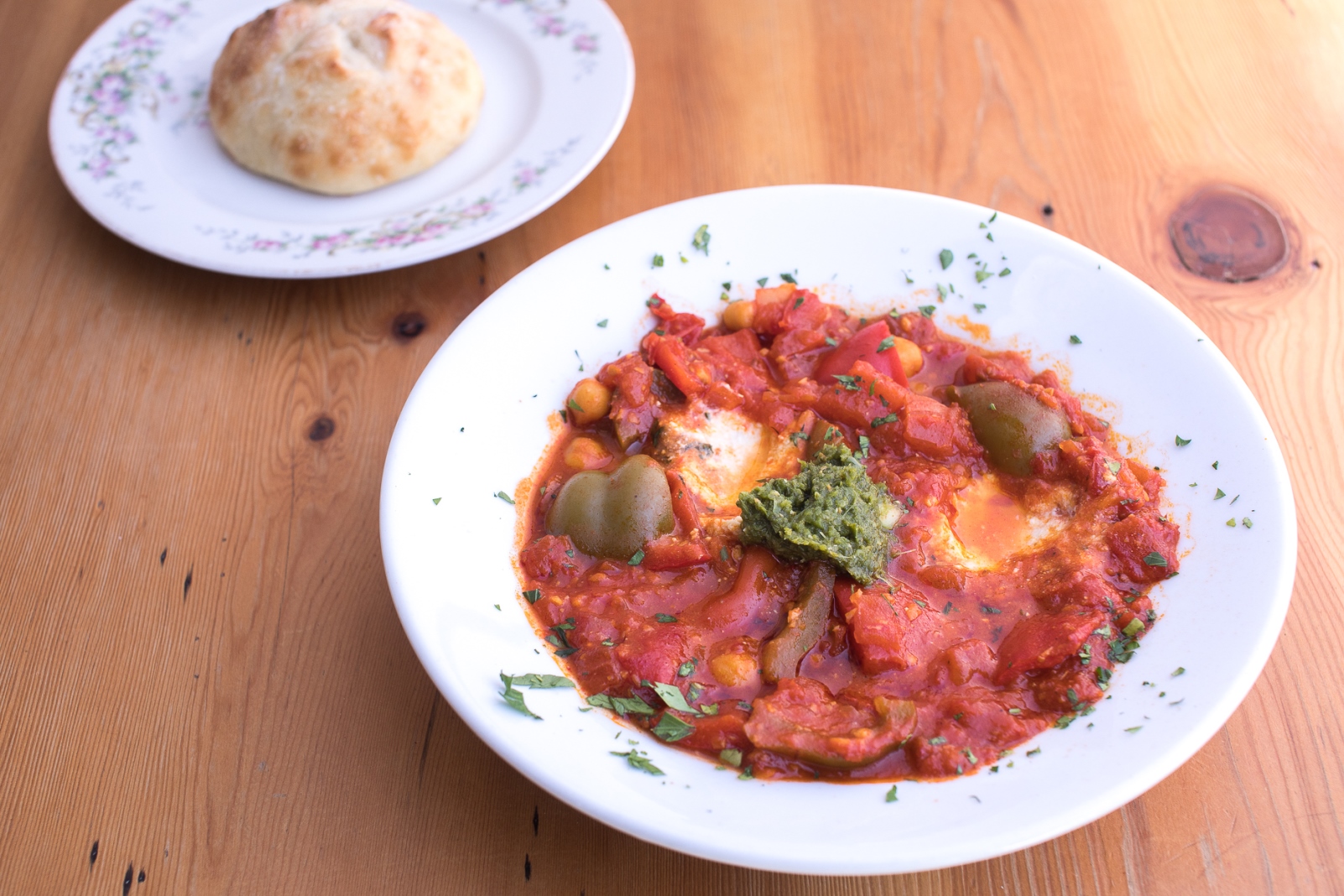 Vegan shakshuka on a plate at Aviv in Portland, Oregon. Photo: courtesy

The Portland Monthly wrote that Aviv’s signature shawarma fries – “a mountain of thick cut fries tossed with crisp-edged, curry-spiced soy curls served atop a slick of hummus and adorned with tahini, spicy tsug, and amba” is an addictive “carb and spice bomb that omni- and plant-based gluttons can share without a shred of lingering resentment on either side.”

Shawarma, of course, is not known as a vegan dish – it’s generally shaved slices of spit-roasted lamb or turkey – but Caspi gave up animal products as part of a life overhaul in the year between closing Gonzo and opening Aviv with business partner Sanjay Chandrasekaran, owner of several Indian vegan eateries.

“I decided to try to be the person I wanted to be, and a big part of that was not eating other animals,” he says. “And instead of preaching my philosophy to others, I get the message out through the food.” 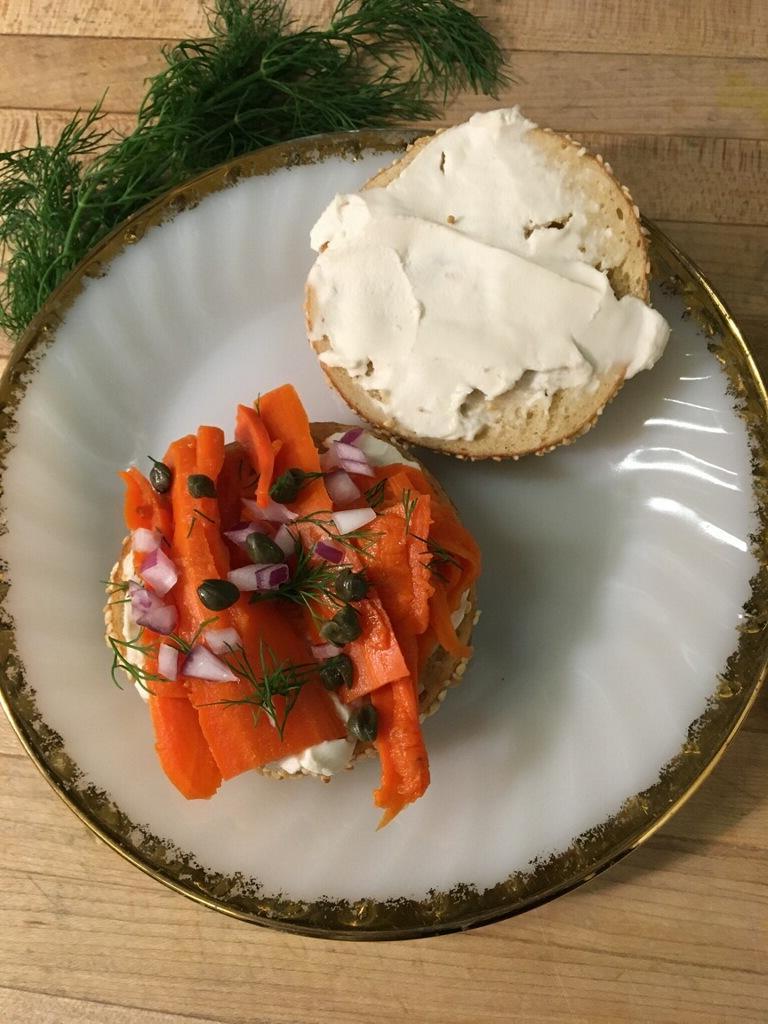 Smoked carrot fills in for lox on a bagel at Aviv in Portland, Oregon. Photo: courtesy

Coincidentally, Caspi’s philosophy mirrors that of a growing number of Israelis. Israel has the largest number of vegans per capita and is a leader in the switch to plant-based restaurants.

Adapting shawarma and other traditional meat dishes was a challenging pleasure for him and Chandrasekaran, Caspi says. “At first it seemed daunting but making all these things has ended up being super fun and crazy enjoyable.”

Not everything on the menu is Israeli-inspired. A variety of mushrooms forms the basis of dishes like “calamari” and “steak.” Salt-cured smoked carrots provide a lox-like topping for bagels. Diced tofu swims in matzo-ball soup. Foraged greens like morel and fiddleheads star in a dish called Enchanted Forest. 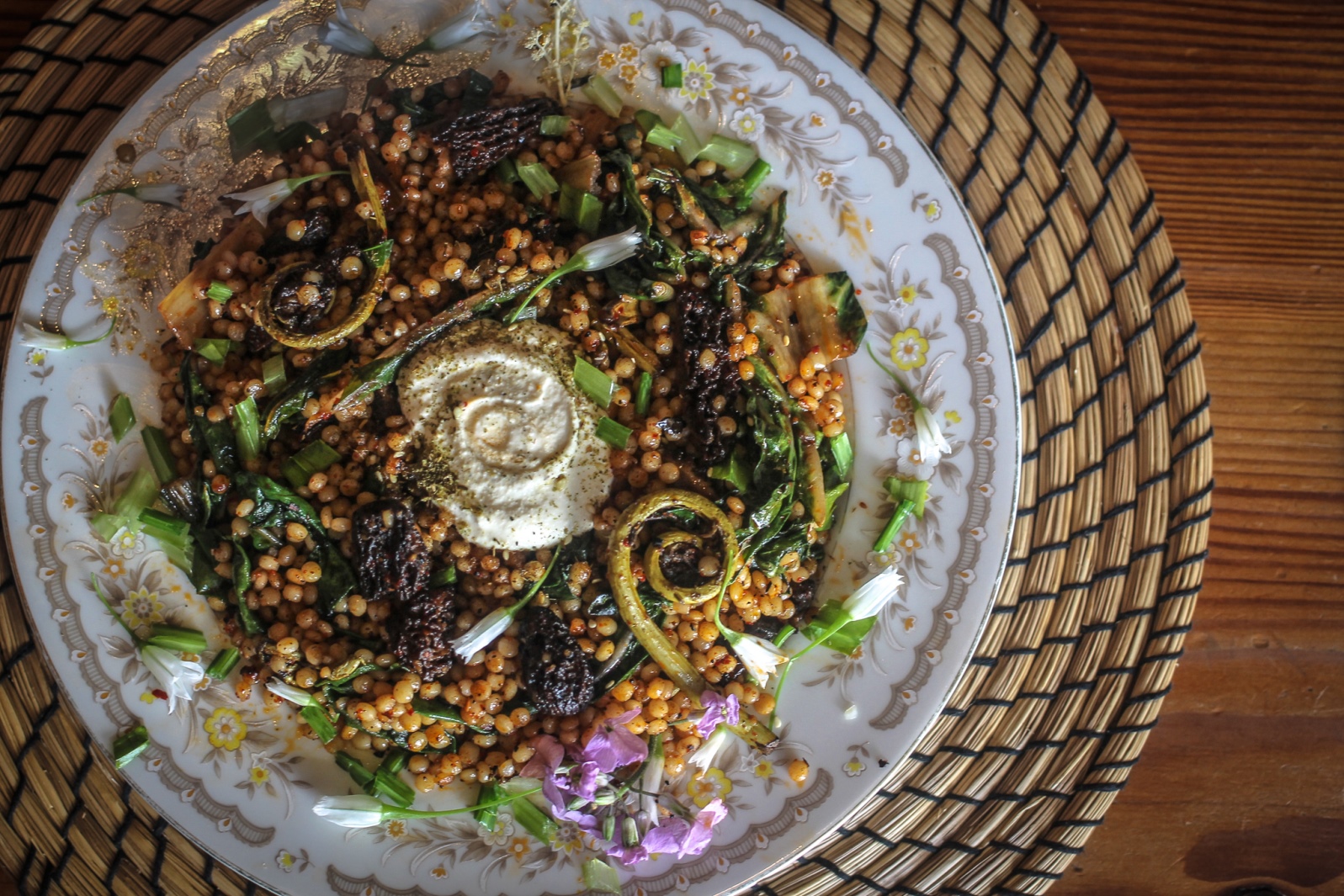 Born in Ashkelon, Caspi was raised mostly in that southern Israeli coast city (where his mom and sister still live) and partly in the United States. At 18, he moved to Tel Aviv.

“I enjoyed the food there and that was a huge influence on me but I did not cook. Cooking came way later,” he tells ISRAEL21c.

Caspi eventually wound up milking goats on a farm in New Mexico. “That’s when I started cooking and it made me happy. About 12 years ago I moved to Portland and started pursuing cooking as a career.”

Prior to Gonzo he worked as a line cook and manager of other food carts in town. 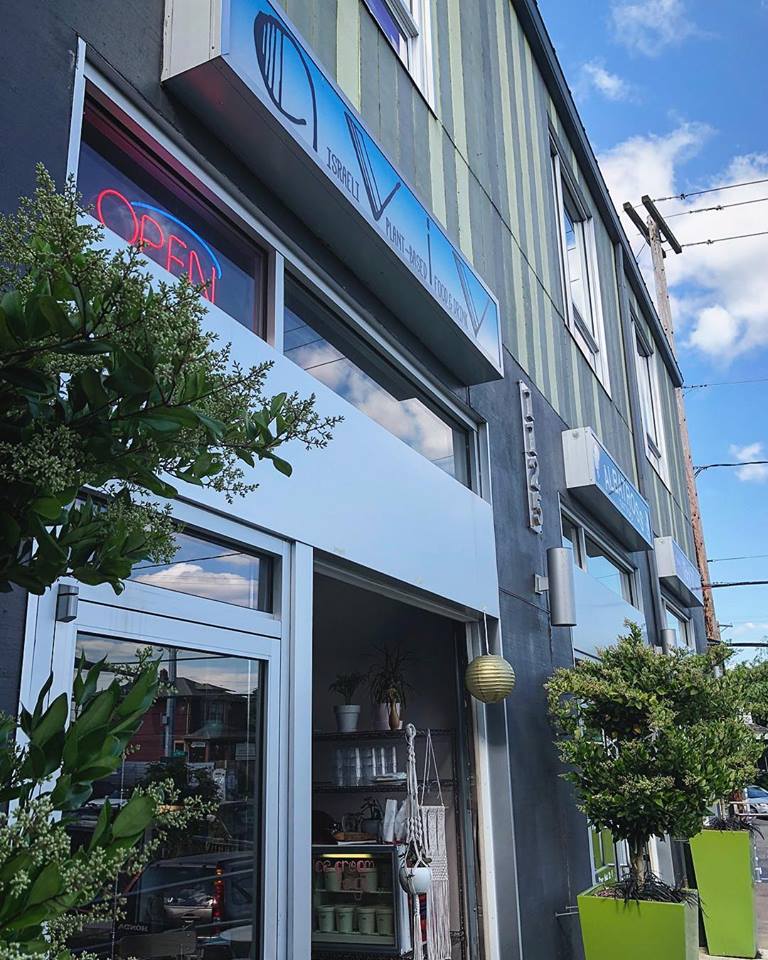 Aviv was so named because the word reminds Caspi of his beloved Tel Aviv and because it means “spring,” the season when “beautiful vegetables are coming out of the ground again.”

Aviv isn’t certified kosher but Caspi points out that vegan cuisine is intrinsically kosher. The restaurant caters many bar/bat mitzvahs and Jewish weddings.

Aviv has gotten a lot of press and attracts an eclectic crowd of young vegans, Indians and Jewish families including a cadre of Israelis living in the greater Portland area. “Portland is not very diverse but our clientele is,” says Caspi.

Hebrew words and Israeli references pepper the menu at Aviv. For example, there’s the Neve Tzedek cocktail, a margarita-like concoction containing the African taste of tamarind and the Italian taste of Aperol.

Do most diners know Neve Tzedek is an artsy historic southern Tel Aviv neighborhood? Probably not, but that doesn’t matter. For Tal Caspi out in the American Northwest, it’s a reminder of his roots.