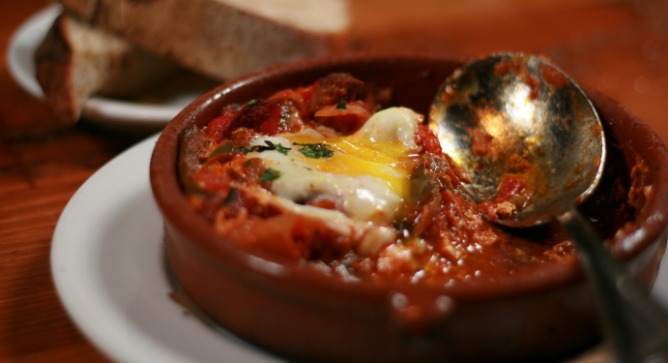 Shakshouka, an Israeli breakfast staple, actually is a relatively new item on the menu. Photo courtesy of Wikimedia Commons

The bountiful buffets that have made “Israeli breakfast” famous among tourists usually include shakshouka, a spicy North African concoction of eggs poached in a tomato-pepper-onion sauce. So it was no surprise that Lonely Planet included the shakshouka at Jerusalem’s Tmol Shilshom café on its recent Top 10 list of the world’s best breakfasts.

But Jewish food writer and historian Gil Marks tells ISRAEL21c that this signature dish is actually a latecomer to the already laden Israeli breakfast table. The classic must-haves, he says, are scrambled or hardboiled eggs, a variety of chopped vegetable salads, semolina porridge, cheeses, fresh breads, plain and flavored yogurts, fruit and granola, washed down with fresh juice and/or coffee or tea.

It was only in the past couple of decades that ethnic foods got added to the smorgasbord that has become a cultural tradition in Israeli hotels and restaurants: shakshouka, Iberian-inspired pashtida (a cross between a kugel and a quiche), Yemenite malawach (fried bread dough), Eastern European blintzes and smoked fish, American sweetened cereals, oatmeal, bagels, pancakes and waffles, along with pastries to top it off.

It’s all included in the price of a hotel room pretty much anywhere in Israel, and savvy guests will always come to the dining room armed with a doggie bag to pack up items for their next meal – assuming they even get hungry before dinnertime.

A meal to fuel kibbutz workers

The original Israeli breakfast menu, Marks explains, was innovated by another Israeli cultural icon, the kibbutz.

Back in the early days of the state, when times were tough and food was scarce, breakfast meant a hard roll and a scoop of leben — a liquidy Mideast yogurt. But kibbutz agricultural laborers needed a heartier start to their day, so the communal village’s kitchens began putting out a spread with whatever they had on hand. 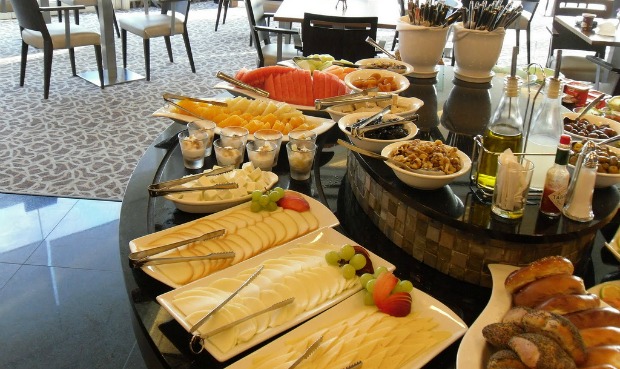 A plentiful breakfast buffet is always included in the price of an Israeli hotel room.

“The Israeli hotels picked up on that,” say Marks, who moved to Israel last summer after years of splitting his time between New York and Jerusalem.

“Instead of the classic Continental breakfast of croissant and coffee, the hotels started having an extensive smorgasbord. And as various Middle Eastern traditional foods became popularized, like shakshouka and malawach, they got adapted to the hotel breakfasts and they also made their way into the general Israeli public’s breakfasts.”

Much as they love their breakfast, most Israelis don’t have the time to prepare such a plentiful spread in the morning. That’s why restaurants such as Tmol Shilshom began offering their own versions. And though hotels serve breakfast only in the morning, restaurants are free to serve it any time of day or night. 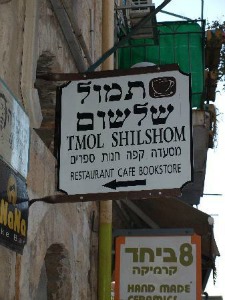 For a world-class breakfast, try Tmol Shilshom in Jerusalem. Photo courtesy of TripAdvisor

To stay within kosher rules that forbid mixing meat and milk, the hotels keep the menu strictly parve (vegan) and dairy. Non-kosher restaurants have no such constraints. Customers at popular eateries such as American-diner-inspired Benedict’s in Tel Aviv (tagline: “All About Breakfast”) can order bacon or kabanos sausage on the three-egg omelet part of the “Classic Israeli Breakfast” option – all day, every day of the week.

Marks (who breakfasts on goat-milk yogurt with honey and/or fresh fruit) includes a shakshouka recipe in his James Beard award-winning Olive Trees & Honey, as does London-based Israeli chef Yotam Ottolenghi in his vegetarian cookbook Plenty. But there are many different takes on this rustic, huevos rancheros-like dish.

However you eat your shakshouka, Lonely Planet has this advice: “Don’t forget to ask for extra crusty bread to mop up the hearty sauce.” You’ll have no problem finding extra bread at any Israeli breakfast buffet.