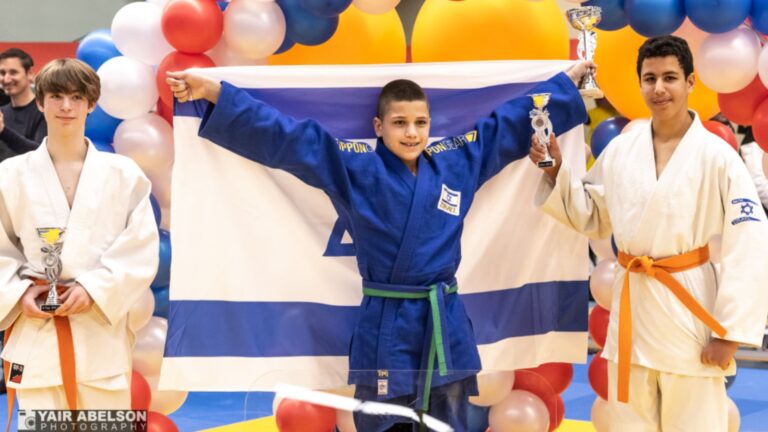 Nir Abelson, center, with this prize and the Israeli flag at the international judo contest in the Netherlands earlier this month.

Nir Abelson ,12, won top spot at a judo event for children and teens with special needs earlier this month, marking a personal victory in a journey that began when he was only four years old.

Nir, who was diagnosed on the autistic spectrum, suffered at the hands of bullies who told him when he was little that they were learning judo and would consequently beat him up. His father, Yair, tells ISRAEL21c that Nir in turn decided that the best way to look out for himself was to learn judo as well, becoming a national and now international champion.

Nir won his international gold at the Special Needs Judo World Games in The Netherlands, which hosted some 400 athletes from 11 countries. He took to the mat in the 12-15 category, overcoming older contestants.

Nir has already accumulated numerous medals in Israel, where he usually competes in mainstream contests. Last month, for example, he took gold at the Israeli Judo Association Cup, and last year came in second place at the national championship.

He now has his sights set on this year’s national championship, as well as on the Special Olympics World Games set to take place in Berlin in 2023.

UNCOVER ISRAEL - Get the ISRAEL21c
Weekly Edition free by email
Sign Up Now!
Bring Israel's story to life.
Millions of people around the world rely on us to gain a deeper understanding of Israel. We are the trusted source for original content you won't find anywhere else.
You can make a difference. Donate today to support journalism that brings Israel’s story alive.
SUPPORT ISRAEL21c
Read more on:   News, israeli athletes, Special Olympics, Judo