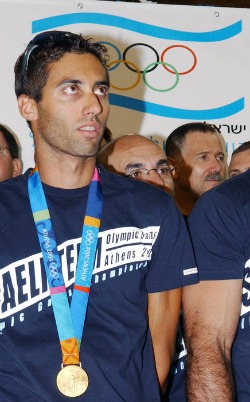 A small country like Israel does not have an easy time fielding a group of athletes that can compete in international events. But despite a tiny population pool and minimal resources and funding, the 2004 Israeli Olympic team still walked away with the gold when windsurfer Gal Fridman topped the competition in Athens.

It took the country 56 years to win their first gold medal in the Olympics. However, when it comes to the world of disabled athletes, Israel possesses some of the world’s most talented atheletes. And they’ve made their presence felt at the World Paralympic Games currently taking place in Athens, with 3,846 athletes are competing from 136 countries.

Israel’s team of 24 atheltes has made a stellar showing topping its performance four years ago in Sydney when they won six medals. Until this year, Israel has won a combined total of 83 gold, 92 silver and 86 bronze medals in past Paralympics. Going into the final day of competition on Monday, Israel’s tally was 13 medals – four gold, four silver, and five bronze medals which places the delegation 30th out of 75 medal-winning nations.

Their success is the result of sheer determination, and an indication to the extent to which the country’s institutions have aided their road to recovery. Many of Israel’s disabled citizens received their injuries while serving in the Israeli Army.

Swimming competitor Budin is one such veteran who now runs a computer business and swims twice a day in at Beit Halochem, the Israeli army’s main rehabilitation center.

“It is common among disable people in Israel to say that it’s better to become disabled during your army service than as a result of birth or an accident,” said Dr. Yaniv Poria, a lecturer in the Department of Hotel and Tourism Management at Ben-Gurion University of the Negev and the author of a study on the disabled in Israel.

But according to Reuven Heller, the director of the Ilan Sports Center for the Disabled, and the manager of the last eight Israeli Paralympic teams, disabled athletes in Israel are basically facing the same obstacles.

“I’m proud to say that all our athletes are either working, or both working and studying. Still, if I have an athlete working six or eight hours a day, it’s impossible to concentrate on put in your best sporting performance,” Heller told ISRAEL21c.

Heller says it’s an uphill battle for disabled athletes to receive the same rights and recognition as the conventional Olympic athletes, but that the situation is improving.

“In previous Paralympics we’ve had to pay for the entire cost ourselves, but this year we received a nice sum from the ministery of sports and culture. It’s getting a little better, but it’s still not good enough,” he said.

Israeli President Moshe Katsav echoed that sentiment during a pre-Paralympics reception for the team. The triumph of the Paralympic athletes was even greater because they were not only competing against rivals from other countries, but they were challenging the limitations placed upon them by their disabilities, and often achieved what appeared to be unachievable, he said.

“My aim is for each athlete to achieve his best performance, to beat his own record. In doing so, if they happen to break another record or win a medal, that’s a bonus,” said Heller.

For the Israeli team in Athens, there were a lot of bonuses. Swimmer Itzhak Mamistalov won Israel’s first gold medal at the 2004 Paralympic Games in Athens to successfully defend his Sydney Games Paralympic title, but also set a new Paralympic record of 2:35.24.

Also in the pool, Inbal Pezaro took the bronze in the women’s 200m freestyle S5 at the games, finishing with a time of 2:58.74.

Doron Shaziri won two bronze medals in the men’s free rifle contest. He said after winning the medal that “I am satisfied because any medal is OK. I changed the color. I usually got the silver medal. Now it is the bronze. Maybe the day after tomorrow I will change the color again.”

Shaziri lost a leg in Lebanon in 1987, while on an Israeli army patrol. Shaziri, a father of two, makes sports wheelchairs for a living and says he tried to keep his mind on the competition while taking part in four Paralympics. He won three silver medals in Sydney and Atlanta.

“There are a lot of people who get wounded in wars and minefields, but I don’t think about it when I come here,” he told AP. “It depends on the person, there’s no rule. Every man or woman takes it differently. For me, I try to be very realistic and completely positive looking, acting with what I have now, and make the best of it.”

After winning a gold and a silver medal earlier in the week, swimmer Leibovitch claimed another two medals – a bronze and a silver over the weekend. Israel’s sailors took gold in the Sonar class to ake Israel’s medal tally after the first week of the Games to 10.

The Paralympics were created by Ludwig Guttman, a German Jewish doctor who fled the Nazis. He pioneered treatment techniques for paralyzed British soldiers in World War II, using sports to keep patients active.

The Games, taking place for the twelfth time, have become a top-level professional competition since first taking place in Rome in 1960.

In 1968, the games were held in Tel Aviv. Since then, Israel has taken sports rehabilitation seriously. At the Ilan Sports Center, Heller runs programs year round to train the Israel athletes in a number of sports.

“At Ilan, we train atheletes in 15 different sports, and we have a number of leagues including four in basketball and one in volleyball. Whenever possible we try to pair with abled bodied athletes, whether it’s a marathon or sailing. Integration is the key,” he said.

Poria agrees that sports is one of the best ways for the disabled to deal with and overcome their handicap.

“Sports is recognized as one way to bring about recovery in disabled people – not necessarily in a physical sense, but more importantly, mentally. And this is one area we are very good at in Israel – unfortunately due to our experiences with army injuries,” he told ISRAEL21c.

Katzav last week congratulated the Israeli athletes who had won medals thus far. Katsav said, “You have honored all Israeli citizens, and mainly yourselves. You have proved that with hard work, determination and persistence one can overcome difficult physical and motor limitations. You deserve to serve as an example to us all.”

Wheelchair bound Moshe Mutz Matalon, who headed the Israeli delegation to Athens said that the team symbolizes the spirit of Israel. “These are people who were hurt, yet despite their disabilities they bounced back and brought honor and pride to the nation.”