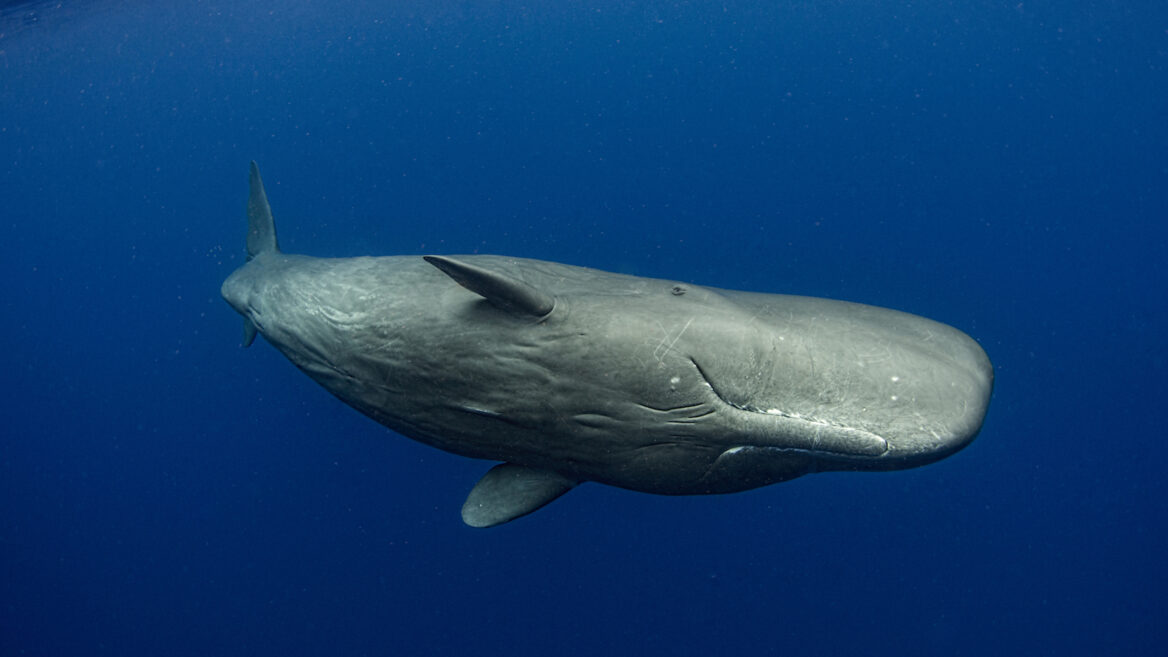 You talking to me? A female Sperm whale. Photo by Amanda Cotton

We all know whales communicate with one another, but what if we could understand what they say, and communicate our own thoughts back to them?

That’s what marine scientists from the University of Haifa, and top universities across the world hope to do with a new five-year research study to decipher how Sperm whales communicate and whether their speech patterns can be replicated so humans can communicate with them.

The new interdisciplinary Cetacean Translation Initiative (CETI) kicks off this week at a press conference in Dominica in the Caribbean, where the project will take place.

University of Haifa scientists will be joined by colleagues in marine biology, marine acoustics, artificial intelligence, and linguistics from Harvard University, The City University of New York (CUNY), Massachusetts Institute of Technology (MIT), Imperial College London, U.C. Berkeley and others.

Researchers will use state-of-the-art machine learning and non-invasive robotics to listen and translate the Sperm whales’ language and even attempt to talk back to these beautiful and increasingly rare creatures. 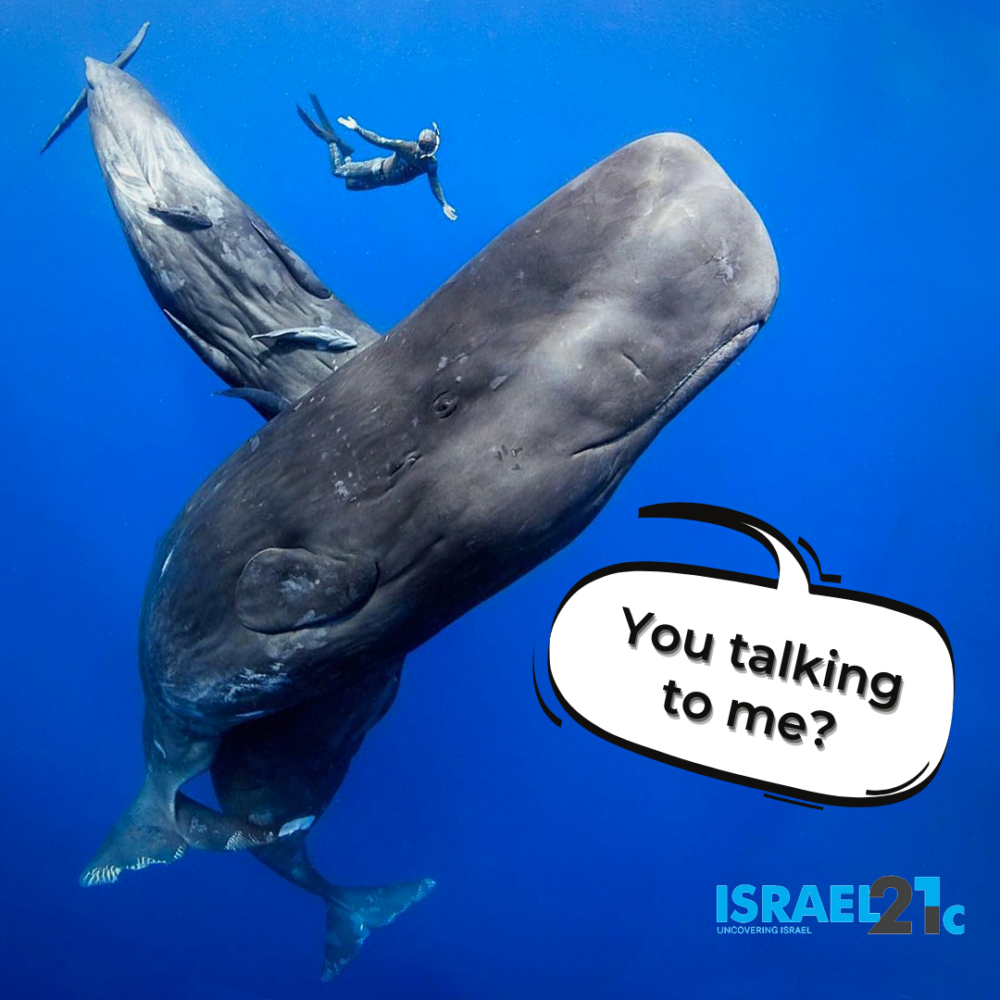 The Sperm whale, which is considered a vulnerable species, has the largest brain on Earth, more than five times heavier than a human’s. Like humans, it also has a complex communication system and lives in tightly knit family groups.

These whales can grow up to 20.7 meters (68 feet), and live for 70 years or more. They are vital to our environment because they keep carbon out of the atmosphere, support our oxygen supply, and increase marine life.

“These [mammals] make a clicking sound at varying frequencies when they are in the company of other whales. The question is, is this just a simple code or a true language?” said Prof. Dan Tchernov of University of Haifa’s Leon H. Charney School of Marine Sciences who is one of the leaders of the project.

“Right now, our database is not comprehensive enough to know the answer to this question. However, with the advancement of machine learning, and advanced linguistics, we realized that if we gathered enough data about their voices, the context in which these sounds are employed and understood and their behavior and motivation behind these sounds, we can then develop an algorithm which will determine whether they have an authentic language.

“Of course, the dream would be if we are able to communicate with them, on their terms,” added Tchernov, who is also Scientific Director of The Morris Kahn Marine Research Station. 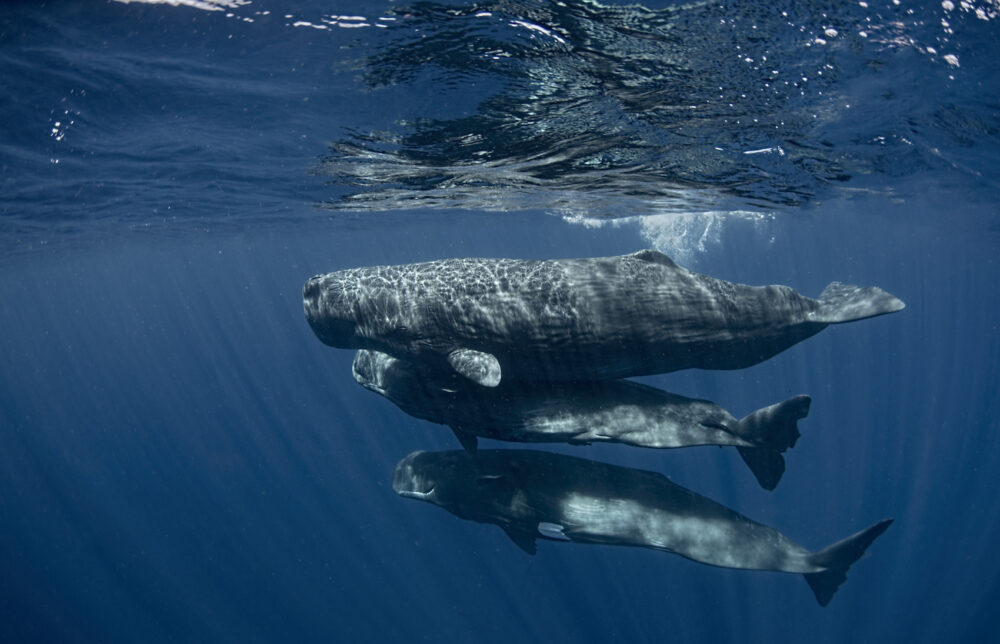 What are they saying? Three Sperm whale calves. Photo by Amanda Cotton

The potential implications should this project prove successful are numerous since the biodiversity of the planet is dwindling fast and humanity must find a way to coexist with the creatures that remain on earth.

Leading the project is Prof. David Gruber, Presidential Professor of Biology and Environmental Science at City University of New York, along with Dr. Shane Gero, a National Geographic explorer and an expert in whale biology who has investigated Dominica Sperm whales for over a decade.

They will work with Tchernov, who is serving as the project’s operational director. Other researchers involved include University of California, Berkeley and MIT Prof. Shafi Goldwasser, and Harvard University’s Robotic Program Director, Prof. Rob Wood.

Also part of the University of Haifa team are Dr. Roee Diamant of the Marine Sciences Department, who will be the project’s lead acoustic adviser and in change of placing the world’s most advanced marine mammal listening and localization array, and Dr. Bracha Nir, Head of the University’s Department of Communication Disorders, who will investigate mother and calf communication themes.

“We now have the tools to identify and translate the deep structure of [the whales] communicative patterns and to kickstart the path towards meaningful dialogue with another species. By illustrating their incredible intelligence and advocating for legislation, we can accelerate conservation efforts,” a statement says on Project CETI’s official website, called appropriately enough, The Audacious Project. 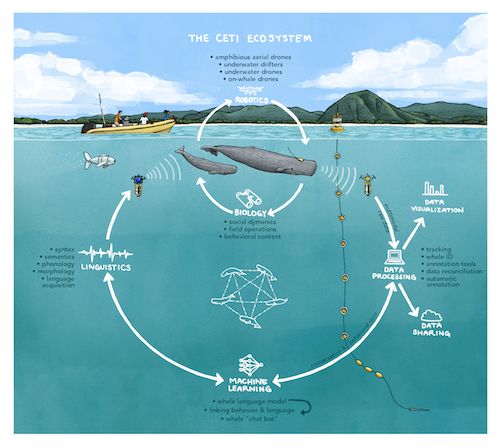 The Project CETI ecosystem. Illustration by Alex Boersma
UNCOVER ISRAEL - Get the ISRAEL21c
Weekly Edition free by email
Sign Up Now!
Give
Every
Month
Help ISRAEL21c uncover
the Israel we love