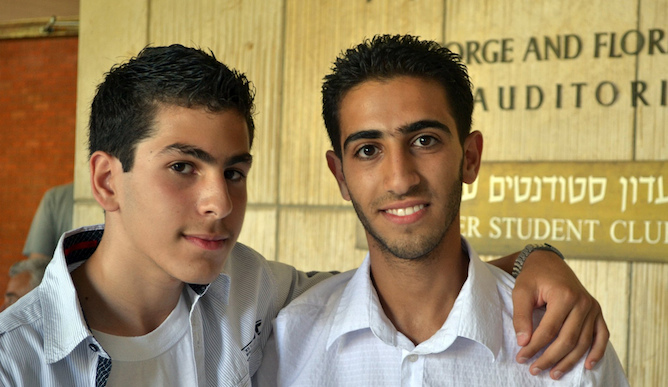 Yishai Cohen, 18, and Ahmed Shawish, 19, are bright, ambitious Jerusalem teens. Both are high-tech entrepreneurs despite their tender age. They may never have met if not for the Middle East Education through Technology (MEET) program in partnership with the Massachusetts Institute of Technology.

This selective program, started 10 years ago, uses technology and business to bring together Palestinian and Israeli youth from Jerusalem, Bethlehem, Ramallah, Mevasseret Zion, Nazareth and Beit Shemesh, 30 to each cohort. They meet weekly during the school year and intensively during summer vacation for three years.

In addition to MIT faculty, mentors from the Hebrew University, Google Israel and other institutions work with the kids in small, mixed groups to devise a business plan for an app or website. The atmosphere fosters friendship and collaboration.

“We learned technical and business skills to build projects together that can make changes in the world,” says Cohen, who finished the program last summer and is developing SmartBus, a public shuttle-transportation system for Israel’s periphery.

Even though he grew up in one of Jerusalem’s mixed neighborhoods, he had no real opportunities to get to know his Arab peers until MEET.

“I never had a chance to sit and talk with a Palestinian until I was 15, because we go to different schools,” Cohen explains.

“I learned that we’re actually very much the same. We like the same music and sports – we’re just doing them in different languages and different neighborhoods. When we study technology and business together, we can make really cool projects and find new solutions to common problems.”

Over the past two years, a separate program for MEET alumni was launched, including mentoring, workshops and creating videos on social entrepreneurship. 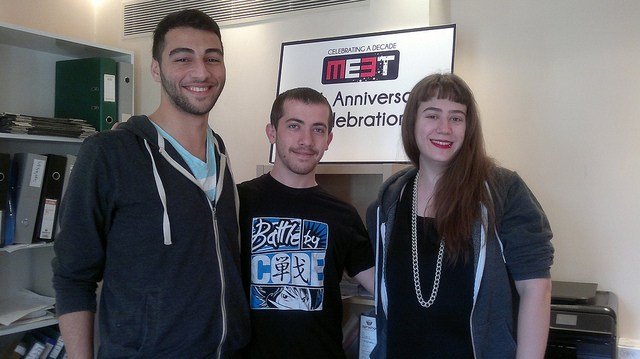 Qualified alumni get four months of seed funding and mentorship through the MEET Venture Lab, opened in January last year in a two-story building on the grounds of the Jerusalem International YMCA. The space is lined with computer stations donated by HP Indigo of Ness Ziona.

ISRAEL21c visited the Venture Lab to speak with the founders of mijob: Ahmed Shawish, David Heller, Eden Averbukh and Sadek Jabr. The team had just established a Facebook and Twitter presence and was readying its Android beta launch. Ahead of a Demo Day on March 6, the four were polishing their elevator pitch.

“Mijob is a market for local micro jobs and summer jobs,” Shawish explains in perfect English, the common MEET language. “Let’s say you want a babysitter. You go into the app, add the job, and if someone is interested they can apply. It’s mostly going to be in English, but the user can choose their language. We’re starting it here in Jerusalem, because it focuses on small communities and we know this one well.”

The group has gotten advice from Roy Munin, cofounder and CEO of Videeback, an online social platform, and community director for Made in Jerusalem, a grassroots initiative that develops, supports and connects innovators and entrepreneurs in the city.

“Roy gave us tips on how to approach communities and understand what they want in a product,” says Heller, 22, who is relocating to Silicon Valley but expects to remain active in mijob, especially in finding investors in California. 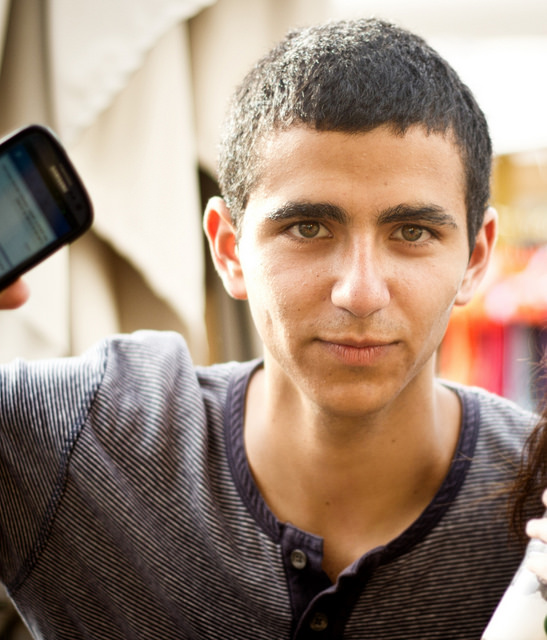 “Our business model is taking a percentage of transactions between users,” Heller explains. “That money could sustain us, but we might need additional seed funding.”

Eden Averbukh, 23, is Heller’s cousin and joined the group as head of design after earning a degree in visual communications from the Bezalel Academy of Art and Design in Jerusalem.

“I met the guys and I loved them and their idea,” she says. The ethnic makeup of the group isn’t a point of interest to her. “I don’t talk about ‘Arab’ and ‘Jewish’ because it’s not an issue for me, but if it does come up when I talk to others, it’s no big deal. People are just very interested to know more about the company, and they are very impressed by the age of the guys I’m working with.”

Alumni Program Manager Dana Moss tells ISRAEL21c that the Venture Lab is part of the overall MEET mission to “educate and empower tomorrow’s most promising Palestinian and Israeli leaders to take action towards creating positive political and social impact in the Middle East — to create a change in the status quo using tools of entrepreneurship and technology.”

There are currently four startups in the lab. Any team that does not include both Israeli and Arab members must be developing a project for an underserved community. Examples of the latter are Cohen’s SmartBus; and Knock Knock, a product for people with hearing impairment by MEET alumnus Asaf Vaknin.

PeaZy, consisting of MEET alumni Mustafa Bakri and Nir Liron with three additional friends, is an app to enable simultaneous login to all passwords on one’s computer.

Though most of those involved are still students, they’re required to attend a weekly lecture or workshop to help them gain skills, brainstorm ideas and form networks. To keep their seed funding, they have to complete assignments such as market research, producing a mock presentation and working on teamwork skills.

Every team can proceed to the Google Israel one-week boot camp, and Microsoft Israel runs a half-day boot camp for Venture Lab participants as well.

Moss describes the participants as “intelligent, open-minded and most importantly desirous of making a change. They’re passionate about innovation as a tool for doing that.”