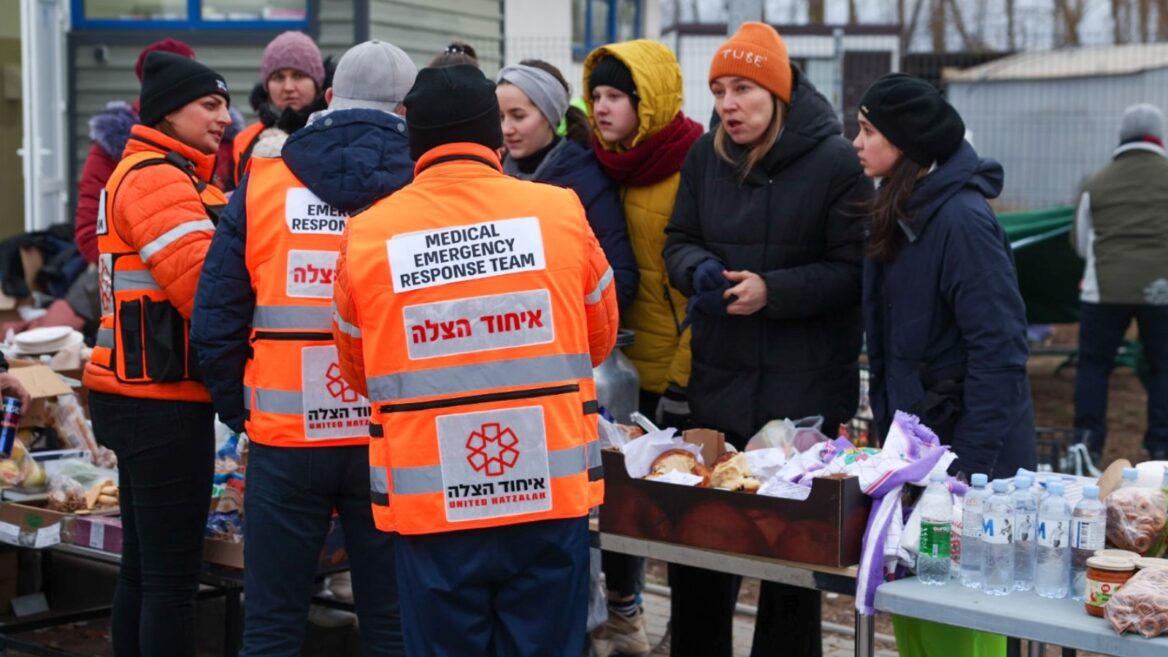 A delegation of 15 physicians, medics and paramedics from Israel’s voluntary emergency response organization, United Hatzalah, was the first international relief organization on the ground in Moldova, aiding about 70,000 refugees fleeing from Ukraine.

“We’re the only ones here,” said Linor Attias, a United Hatzalah emergency situation manager who arrived in Kishinev, the capitol of Moldova, on Sunday afternoon. (Tuesday, a team from Israeli humanitarian aid organization IsraAID arrived in the Moldovan town of Palanca.)

Reached by phone, Attias said there are an estimated 500,000 Ukrainian refugees who’ve fled into Poland, where other international relief organizations are helping them. Moldova is a less-developed country without as many resources, she said.

“Moldovan officials don’t know how to handle a civilian emergency like this but with our experience, we can help.”

The refugees have traveled by foot for days in freezing weather and snow to reach Ukraine’s border, Attias said. 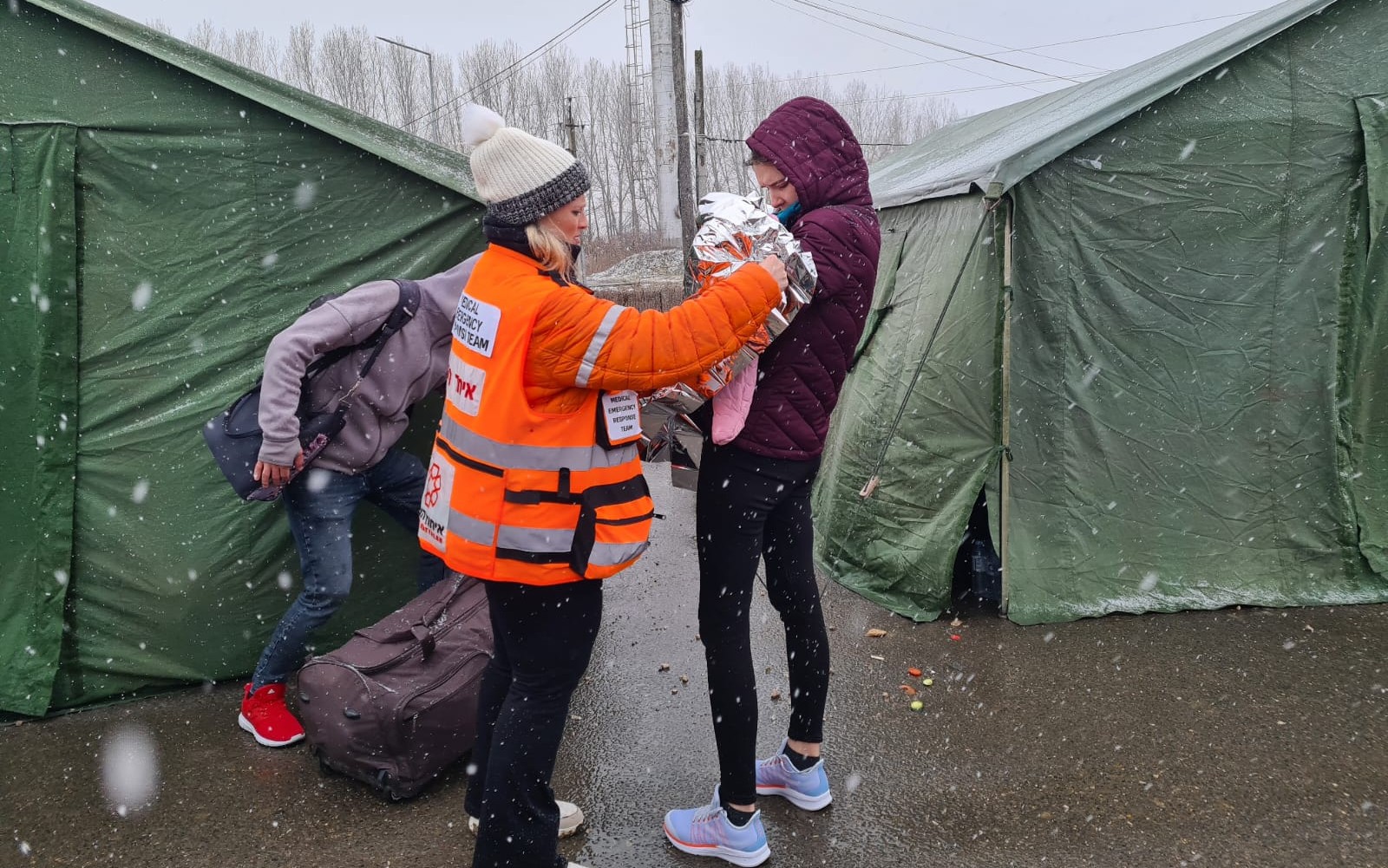 An Israeli volunteer giving a refugee mother a thermal blanket for her baby. Photo courtesy of United Hatzalah of Israel

Only women and children are allowed to cross into Moldova, however. Ukrainian men over 18 are not allowed to leave Ukraine and “must stay and fight. Once across the border, the women have no way to communicate with their husbands, fathers, brothers,” she said. “They don’t know if they’ll ever see them again.”

The United Hatzalah delegation has set up an operation center within a synagogue in Kishinev “where we’re helping everyone.” There are Jewish, Christian, Muslim and Hindi refugees. There is a field hospital and coordination unit to “see what is happening on all the borders.” 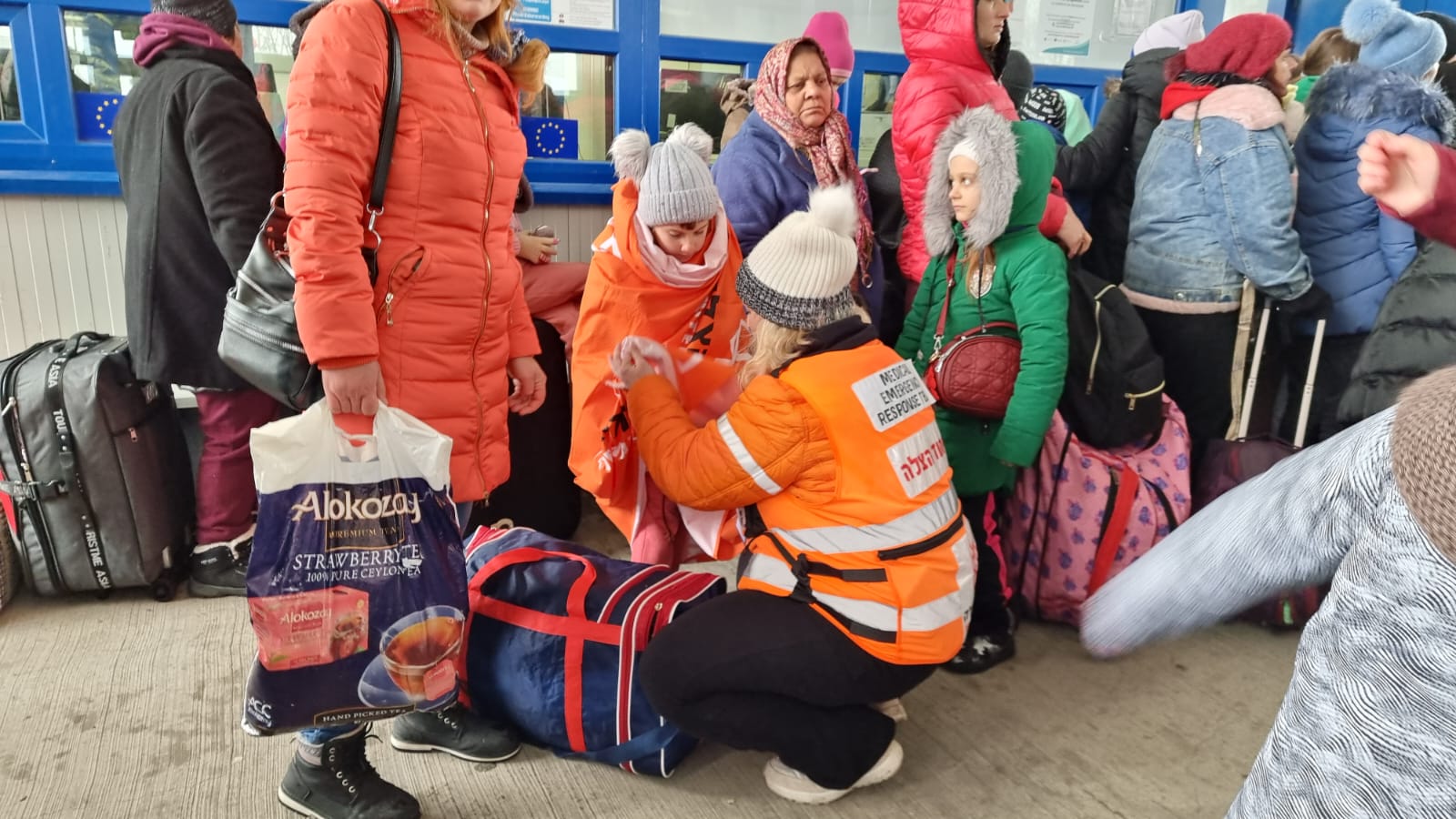 Attias coordinates the volunteers; she is also a volunteer medic in United Hatzalah’s psychotrauma unit.

“All the refugees are traumatized,” she said. “We’ve been trained to treat the refugees to prevent post-traumatic stress disorder before it happens.”

A doll from Israel

Attias, 41, left behind her two daughters, Shoham, 12 and Tahel, 10, in Israel, to help refugees fleeing a war zone thousands of miles away.

Before Attias left, her daughters gave her dolls that they don’t play with anymore to give to the fleeing children. On her first day in Moldova, Attias saw a six-year-old boy who was suffering severe shock.

“For three days and nights, he held onto his mother’s leg as they traveled to reach safety,” she said.

“I gave the boy one of my daughter’s dolls and then he calmed down a bit. After that, I asked him if he wanted to help our team and I gave him an official vest to wear. He was finally able to let go of his mother, and she was able to sleep.”

Attias then told her daughters by phone, “The first treatment I gave here was with your doll.” 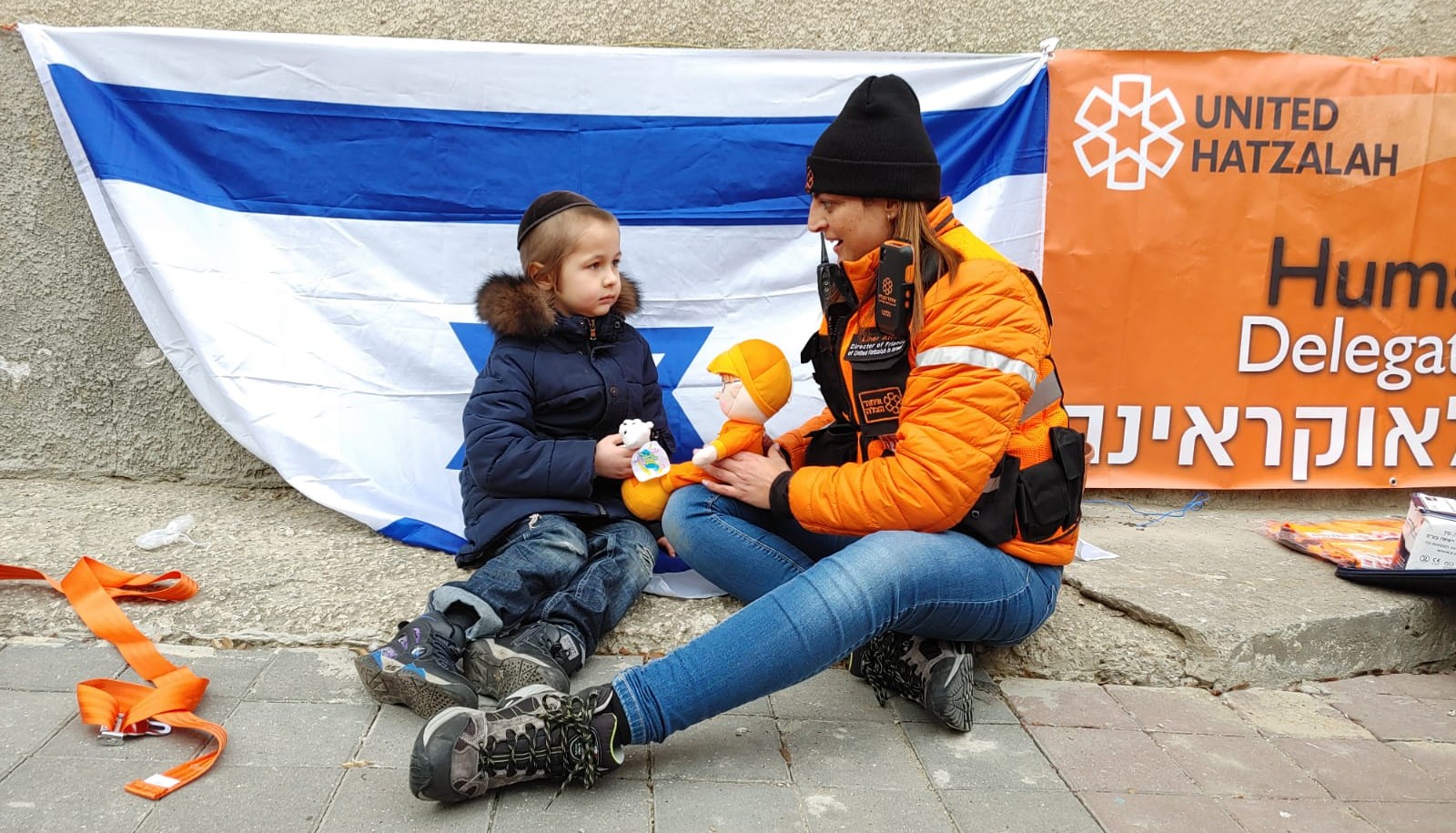 Linor Attias, an EMT and member of United Hatzalah’s Psychotrauma and Crisis Response Unit, giving a doll to a six-year-old refugee from Odessa, currently sheltering with his family in Kishinev, Moldova. Photo courtesy of United Hatzalah of Israel

The delegation brought food and clothes that they’ve already distributed. She described how the refugees arrived with only the clothes on their backs, leaving everything behind.

“Some of the pregnant women have walked for days and tell us they can’t hear the heartbeat of their fetus,” she said. “There are grandmothers with hypothermia and shock. Everyone is very afraid.” 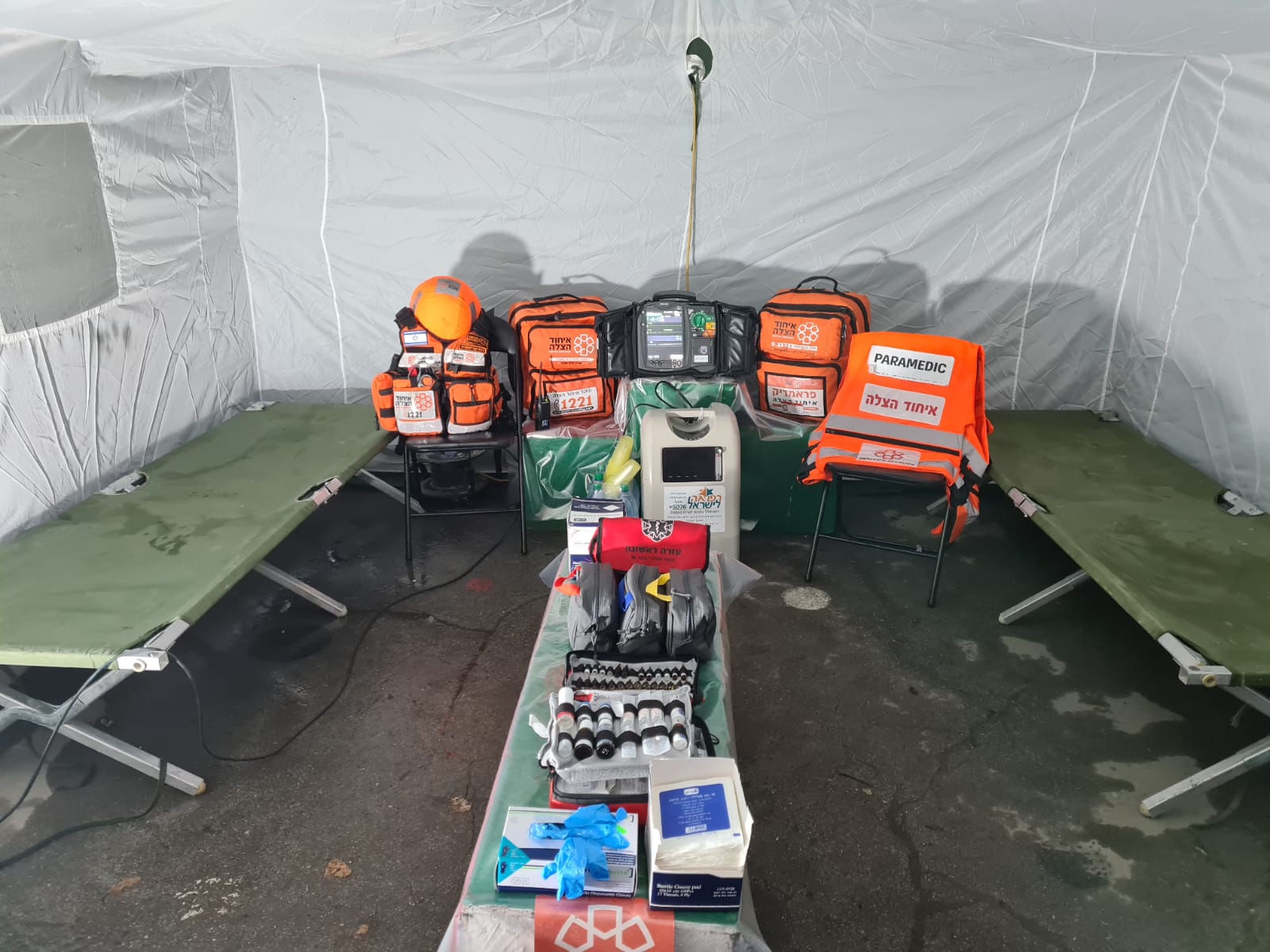 A corner of the field hospital in Chisinau, Moldova, where United Hatzalah and Sheba Beyond are caring for Ukrainian refugees. Photo courtesy of United Hatzalah of Israel

United Hatzalah volunteers have begun giving first aid training courses to Ukrainian refugees in the shelters, hotels and camps where they have taken refuge in Chisinau, Moldova.

“Our goal is to empower the refugees and give them back a sense of control over their situation,” said Vicky Tiferet, one of the EMTs running the training sessions that are being given in the languages of the refugees. She herself left Kyiv 31 years ago, as a child, with little more than three suitcases and her parents. She left behind her husband and four children in Israel to join the mission to Moldova. 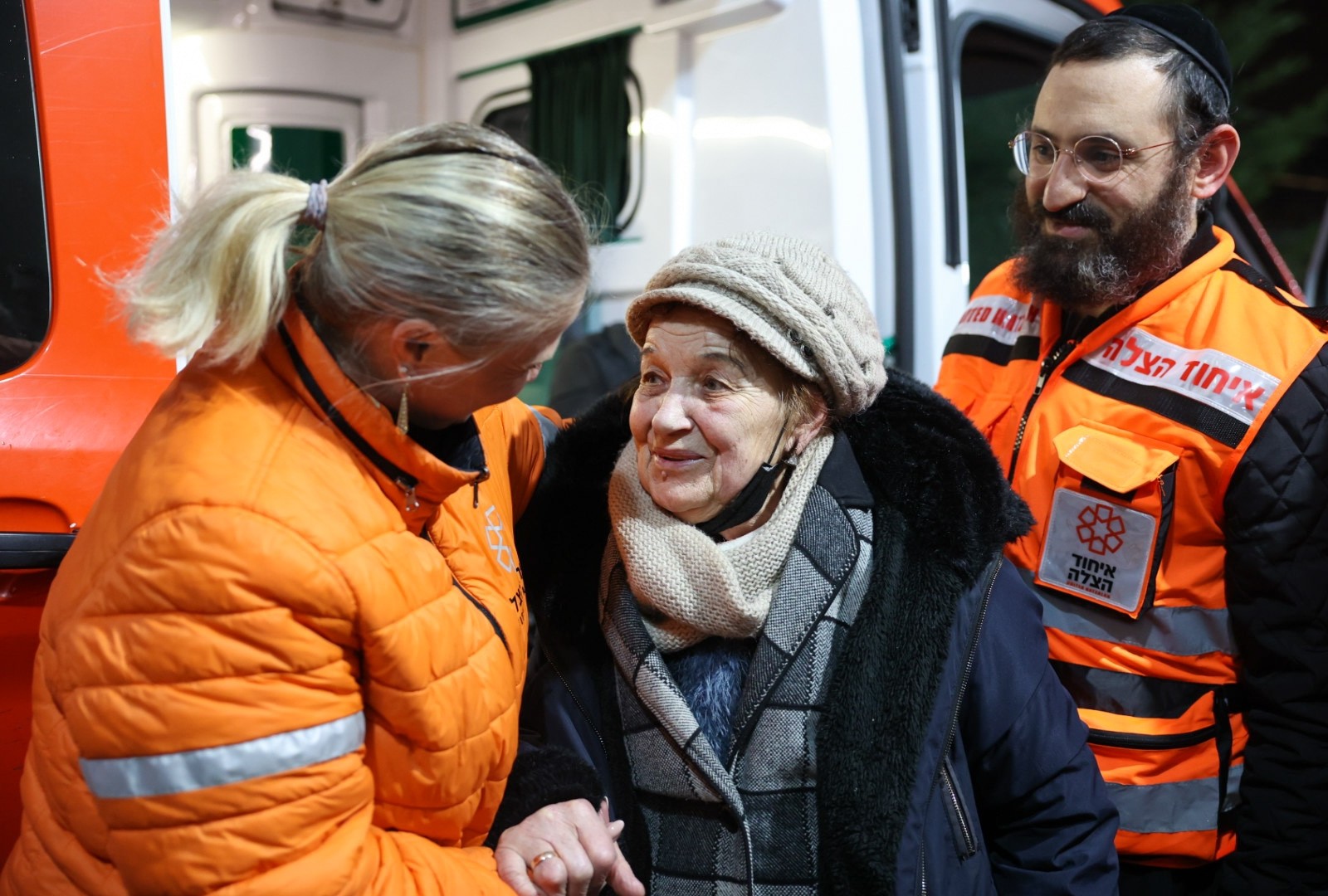 “We will be using the additional supplies and staff to set up round-the-clock emergency medical clinics and field hospitals at the border crossings of Palanca and in the north near Moligev as well as in the capital city of Chisinau where many of the refugees have come, and we are providing assistance to all refugees regardless of race or religion,” said David Krispil, deputy vice president of operations for United Hatzalah and team commander of the Moldova-Ukraine border relief team.

When the plane returns, it won’t be empty. “We are bringing home approximately 150 Ukrainian refugees who have Israeli citizenship,” said Eli Beer, president and founder of United Hatzalah.

Krispil said the organization is assisting approximately 1,500 Ukrainian refugees per day, providing them with food, humanitarian aid, and free medical treatment when needed.

United Hatzalah volunteers have treated hundreds of people for cold-related injuries as well as light injuries, and heart conditions due to stress.

In addition, the Psychotrauma and Crisis Response Unit offers emotional support to the refugees.

“When they see our Israeli flag, they feel safe,” Attias said.

“It’s unbelievable that in 2022, people are fleeing for their lives, leaving behind their houses, not knowing if they can ever return,” she said.

She feels it’s her responsibility – as well as her privilege – to be there.

“I’m representing the 6,200 volunteers of United Hatzalah and also representing Israel,” Attias said. “This is Israel at its finest. We’re volunteers who want to save lives.”

UNCOVER ISRAEL - Get the ISRAEL21c
Weekly Edition free by email
Sign Up Now!
Bring Israel's story to life.
Millions of people around the world rely on us to gain a deeper understanding of Israel. We are the trusted source for original content you won't find anywhere else.
You can make a difference. Donate today to support journalism that brings Israel’s story alive.
SUPPORT ISRAEL21c
Read more on:   Social Action, Humanitarian Aid, United Hatzalah, Ukraine