A Lev Echad volunteer in Israel.Photo by Ariel Liebman

The undisputed heroes of the coronavirus pandemic are the men and women working long shifts in all our hospitals.

But many of them couldn’t get to work without a corona-compliant childcare alternative. This is being provided at 16 Israeli medical centers by an extraordinary volunteer organization called Lev Echad (One Heart) Community Crisis Aid.

Founded in 2005, Lev Echad is like a phoenix: It goes dormant between disasters and awakens quickly when the next emergency hits.

Lev Echad’s volunteer leaders, all in their early 20s, use personal connections and social media to recruit thousands of young citizens quickly, working hand in hand with local authorities to place them where needed most.

In the current situation, Lev Echad has about 12,422 active volunteers (and counting) plus another 13,000 on reserve. Most volunteers are between 18 and 25 years old. On any given day, hundreds of them go out to accomplish a range of needed activities.

“We have five operation centers across the country where people can call in and tell us what they need,” says coordinator Idan Dardik, 23. As of April 12, the total number of incoming calls was nearing 8,000.

“Hundreds of calls are received every day: people in quarantine who need help with grocery shopping; elderly people who seek assistance with buying medicine; a single mother who needs to get her child to a medical treatment; people in need who are usually helped by a charity that is now suspended; and many, many more,” he says.

Referrals are made to appropriate organizations when relevant. “We try to understand what is already being done by other organizations and pitch in to cover what is not being covered,” says Dardik.

Daycare for the children of medical personnel was one of those unfilled needs. Lev Echad worked with each hospital to find nearby spaces where about 80 volunteers care for some 500 children in small fixed groups according to Health Ministry guidelines. In addition, close to 300 Lev Echad volunteers are distributing meals to the doors of thousands of residents in 15 cities. Another 166 are serving as “big brothers” and about 85 volunteers are assisting farmers.

“In small towns, everyone understands who needs help and how to give it, but in cities we’re trying to work on the neighborhood level to organize the same kind of help,” Dardik tells ISRAEL21c.

“In this way we want to build a new Israel.”

From wars to snowstorms

Lev Echad began with students from Ein Prat Academy for Leadership, a values-based program for secular and religious men and women in the year between high school and mandatory military service.

In the summer of 2005, several Ein Prat participants rushed to help thousands of Israelis whom the government had forcibly evacuated from the Gaza Strip without providing adequate employment and housing alternatives.

“A year later, during the Lebanon War, the group mobilized again and decided to activate every time there is a crisis in Israel — anything from a war to a snowstorm in Jerusalem,” says Dardik. “We decided to open it again for the coronavirus crisis.”

Ein Prat alum Asher Katz, 23, joined with some army buddies in building communities along the Gaza border two years ago. The aim of their organization, Garin Hachayalim, is to assist people in towns like Sderot whenever missile attacks are launched from Gaza. Additional communities have been established in other border areas of Israel as well.

Katz has recruited many Garin Hachayalim members as Lev Echad volunteers – including Dardik – to enable the “phoenix” to rise quickly in times of need.

Lev Echad in the USA

When the pandemic hit, Katz was in Manhattan developing a Zionist youth leadership movement sponsored by the Moise Safra Center.

“I was experienced in working with communities in times of crisis and I know how its members can be the biggest asset,” Katz tells ISRAEL21c.

“I saw the outbreak as an opportunity to make communities work this way using the same method that we had in Israel.” 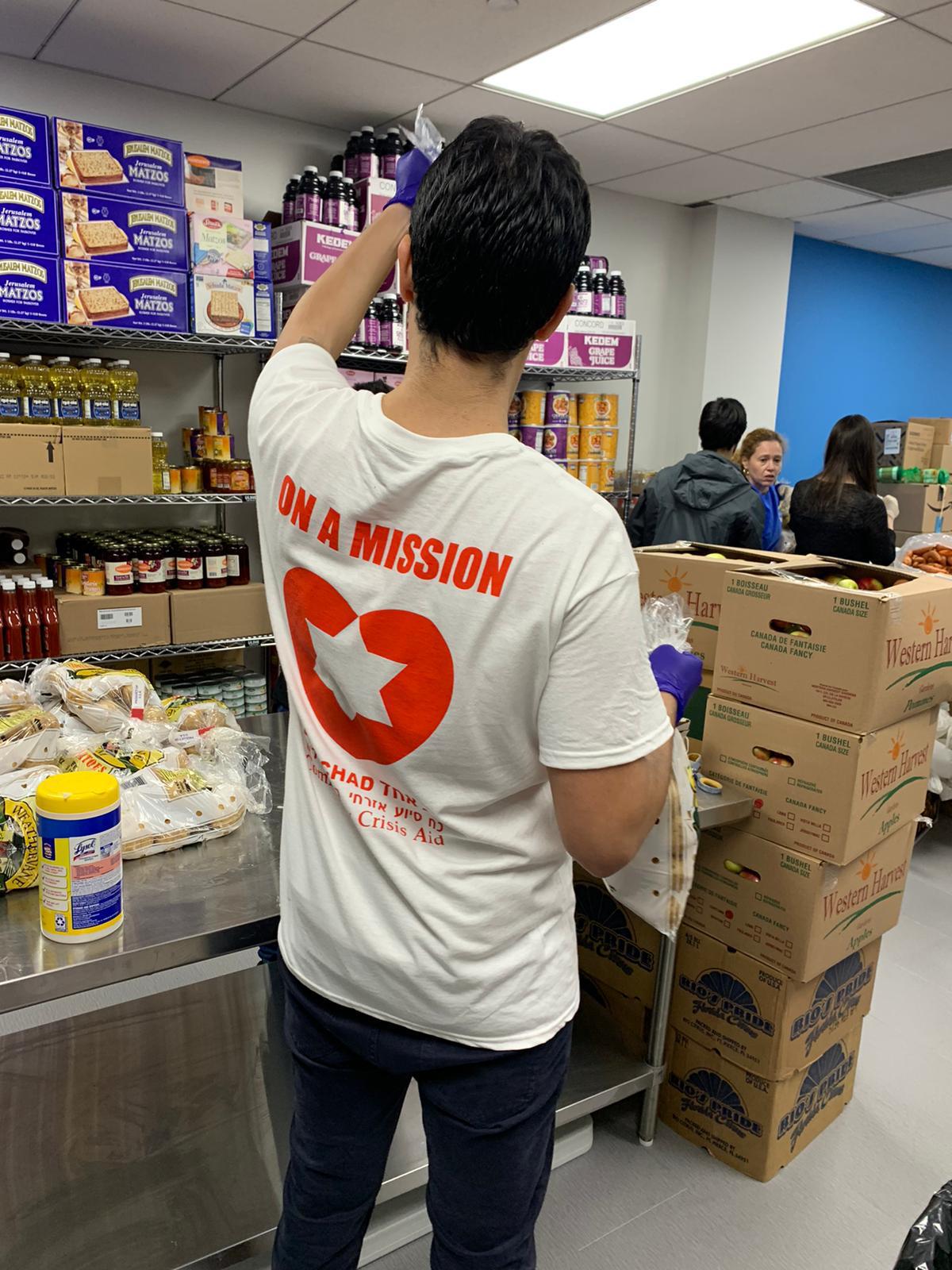 Since March, Katz and volunteer assistants have recruited more than 300 volunteers aged 17 to 25, many of them from the new youth movement. There are also Lev Echad groups in Los Angeles and Dallas.

Lev Echad Manhattan volunteer Daniel Peters, 21, says the group responds to requests. For example, they’ve run errands for families dealing with cancer, and they did essential shopping for an elderly couple whose only child lives in another country. “She turned to us, and within a day her parents had what they needed.”

Some volunteers are assisting temporarily closed soup kitchens in the monumental task of packing meals to deliver to regular clients.

Peters said each organization that asks for volunteers must provide protective personal equipment such as facemasks. For individual missions, Lev Echad provides it if the volunteer doesn’t have it.

While Lev Echad in Israel is funded by individual donors, its new sister in the United States is funded by the Moise Safra Center.

“The Jewish community here has so many volunteer organizations that do wonderful work. But they were all trying to get specific volunteers for specific tasks,” says Katz. “We introduced the Lev Echad model where you bring a huge mass of people and they’re ready for whatever they are needed for.”