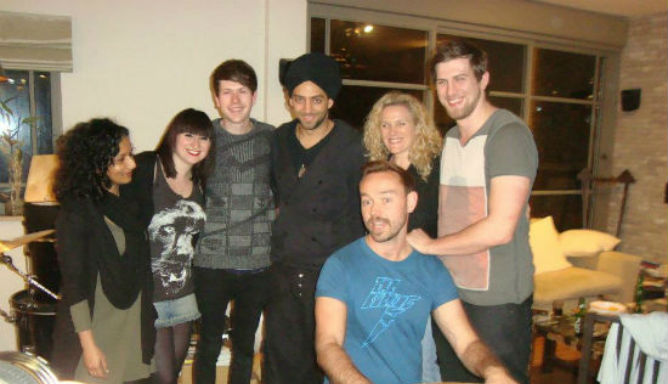 A free trip to Israel with all expenses paid and intimate concerts with some of the top musicians in the country. Sound good?

That’s why five bloggers from the US and UK – Rebecca Schiller of the New Musical Express, Samantha Edussuriya of MTV Iggy, Luke Britton of This Fake/DIY, Rory Hamilton of Feel My Bicep, and Brandon Bogajewicz of The Burning Ear – jumped at the offer to come to Israel for a week of five-star pampering.

The Kinetis nonprofit group brought them over to show them that Israel has a lot more creative energy than the headlines around the world tend to illustrate.

“Our tours generate significant on and offline ‘buzz’… and offer followers of our guests a glimpse into Israeli reality behind what they see on the news and media,” writes Kinetis on its website.

Schiller wrote in a blog on NME about the trip that there are “a few unbelievably talented acts nestled away in Tel Aviv that most certainly deserve some overseas attention.”

Edussuriya of MTV Iggy said the blog she works for is always on the lookout for new global music and innovative international acts. And that’s what was on the menu for the visit here.

ISRAEL21c caught up with them during a visit to Muzik – School of Creation and Production in south Tel Aviv to chat about music as an international language. File-sharing and the internet have no doubt helped musicians around the world be heard. But nothing beats face-to-face interaction or jamming together for a real musical relationship to be formed.

Israeli musicians used to be hesitant about singing in English – mainly from the point of view of not being accepted by local fans – but since 2005 there’s been a domestic explosion of Israeli artists recording in English and today it’s totally acceptable.

Yet even with the internet, the bloggers told me that they knew few Israeli musicians. Their week in Israel has no doubt changed that.

These five bloggers have a combined audience of nine million followers. So, when they meet a new artist they like, chances are someone else is going to read about them as well. And that’s always a good thing.

UNCOVER ISRAEL - Get the ISRAEL21c
Weekly Edition free by email
Sign Up Now!
Bring Israel's story to life.
Millions of people around the world rely on us to gain a deeper understanding of Israel. We are the trusted source for original content you won't find anywhere else.
You can make a difference. Donate today to support journalism that brings Israel’s story alive.
SUPPORT ISRAEL21c
Read more on:   Blog