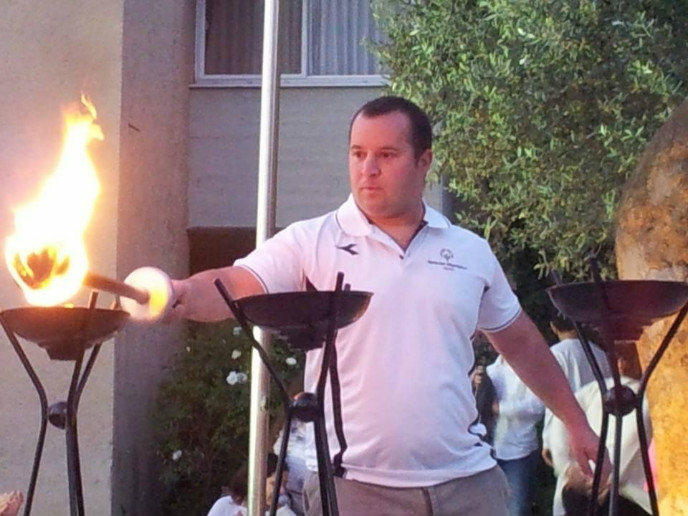 Families of 40 Israeli Special Olympians hoping to represent the country at the 2015 World Games in Los Angeles weren’t sure they would meet their funding quota of NIS 300,000 to send the athletes to the competition, but an ISRAEL21c article about one special swimmer, Mati Oren, helped assure that the whole team will go.

Vicki Oren, a resident of Kibbutz Ginegar near Nazareth, tells ISRAEL21c that the January 28 story was reprinted in several places, including the St. Louis Jewish Light. Oren’s parents live in St. Louis and received calls from friends and acquaintances after the article appeared.

“I know that several donations came in after that,” says Oren. “I had sent an email with a link to the article to lots of people all over the world, and I am sure it contributed greatly to the success of our campaign. But the Jewish Light [reprint] got the attention of some people I had specifically been trying to reach in St. Louis.”

In addition, she says, ISRAEL21c’s coverage helped inform the English-speaking public in Israel and worldwide about Israel’s Special Olympics program.

“I got really positive comments from people in Israel who became aware of this through your website,” she says.

“We have very little material in English, and it was so good to have something well-written to get awareness out to the public, whether they contribute or not. It also helps us reach more families of special-needs children who might want to participate. So the article served a few purposes.”

Mati Oren, 32, is Israel’s most medaled Special Olympics athlete since the country’s 1987 entry in the worldwide competition for athletes with intellectual disabilities. He made history in 2003, when he took home four gold medals from the Dublin Summer Games and achieved a Special Olympics world record in the 100-meter individual medley.

It will cost nearly NIS 1 million to get the team and support staff to Los Angeles; the families were asked to raise one-third of that cost. “We had three or four months of not knowing if we’d make the quota,” says Oren.

More than 100 family members of Israeli Special Olympics athletes are accompanying the team at their own expense.

Israeli McDonald’s restaurants will launch a wristband campaign in May that is expected to raise perhaps another NIS 100,000.

Oren says individual donations are still welcome. “The team can use every dollar it gets.”

For information on how to donate to the Special Olympics 2015 World Games delegation, click here.

UNCOVER ISRAEL - Get the ISRAEL21c
Weekly Edition free by email
Sign Up Now!
Bring Israel's story to life.
Millions of people around the world rely on us to gain a deeper understanding of Israel. We are the trusted source for original content you won't find anywhere else.
You can make a difference. Donate today to support journalism that brings Israel’s story alive.
SUPPORT ISRAEL21c
Read more on:   Mati Oren, Israel Special Olympics, ISRAEL21c Uncovered