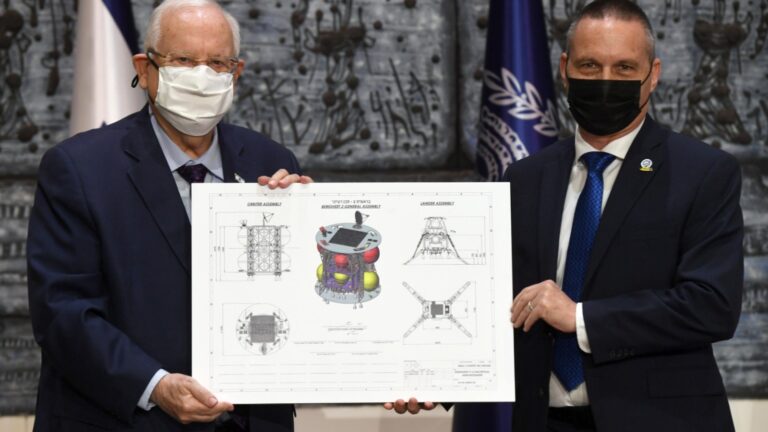 President Reuven Rivlin, left, and Minister of Science and Technology Yizhar Shai at the kickoff of the Beresheet 2 project, December 9, 2020. Photo by Haim Zach/GPO

After the disappointing crash landing of Israel’s Beresheet unmanned spacecraft to the Moon on April 11, 2019, SpaceIL Chairman Morris Kahn immediately announced that Beresheet 2 would be launched in the future.

SpaceIL, in cooperation with Israel Aerospace Industries and the Israeli Space Agency at the Ministry of Science and Technology officially kicked off the project on December 9 at the President’s Residence in Jerusalem.

The ceremony included the online participation of schoolchildren, students and volunteers from the six space centers around Israel, representing SpaceIL’s stated mission of inspiring the next generation.

“Just a year and a half ago, we were here together, when Israel held its breath and looked to the stars. We anxiously watched the Beresheet spacecraft on its historic journey to the moon. We watched its long journey, were in wonder at the researchers and were filled with pride at the Israeli daring and ability that flourished right here and at the groundbreaking work of Space IL,” said President of Israel Reuven Rivlin.

“We were disappointed, and realized that we had to start once again from the beginning. Today, we are setting out on a new path, familiar but different, at the end of which we hope to land three spacecraft safely on the moon,” said the president.

Beresheet 2, comprising one orbiter and two landers, is expected to lift off in around four years from now. It will carry “groundbreaking scientific experiments, helping us to understand better the universe in which we live,” said Rivlin.

Minister of Science and Technology Yizhar Shai said seven countries from five continents have expressed an interest in participating in the project.

SpaceIL CEO Shimon Sarid added, “We are aiming high with Beresheet. Not just to outer space, but to the long-term future of the State of Israel. We will do it by raising curiosity and hope, the ability to dream and realize and through strengthening technological education, research, science and engineering for Israeli students. By doing so, we will ensure Israel’s technological mobility for today’s schoolchildren who are tomorrow’s scientists and engineers.”