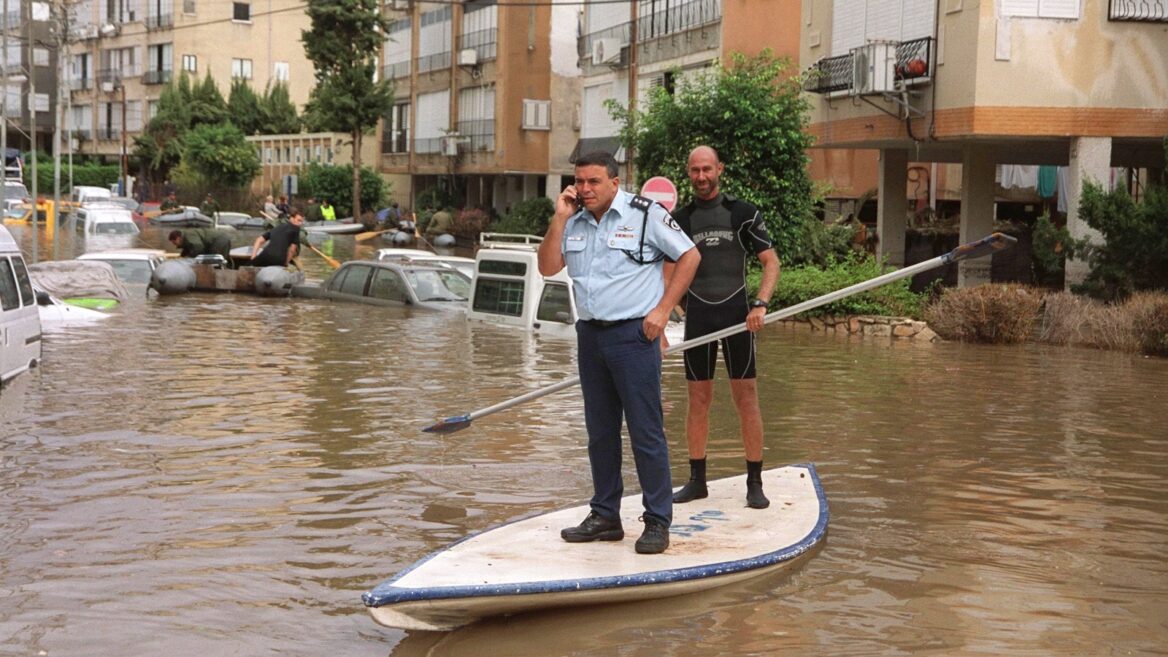 Bat Yam police in the seaside city of Bat Yam searching for trapped residents in need of rescuing. Credit: GPO

Except that summertime eventually does come to an end, and with the first drop of rain, the entire country goes haywire.

Our region is experiencing particularly heavy rainfall this winter, and social media is awash with photos, videos and memes of Nahariya, Ashdod and Tel Aviv in various stages of submergence.

But this is not the first time that Israelis have been waylaid by the rain gods, as proven by these images of wet, wet, wet weather throughout the decades. 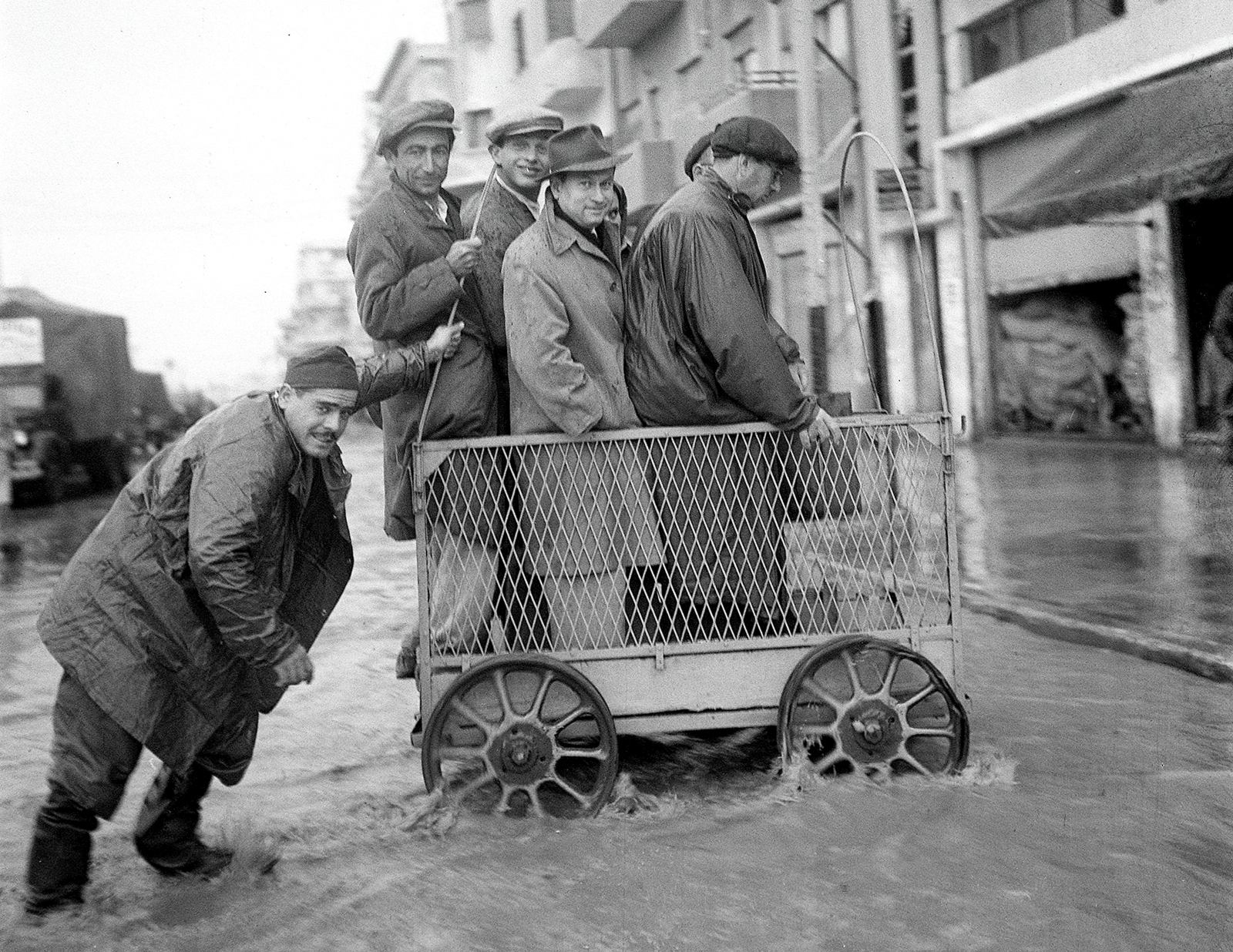 The winter rains of 1938 that overpowered Tel Aviv, especially the flooded Montefiore neighborhood, were captured by Carmel Newsreels. The newsreader praised the construction of a bridge over Wadi Musrara̶aka the Ayalon River — as the solution.

New immigrants from Yemen, flown to the newly founded State of Israel in “Operation Magic Carpet” (officially, “Operation on the Wings of Eagles”) were sent to ma’abarot, temporary housing situations that became all too permanent.

The Rosh Ha’ayin ma’abara, a former British Army encampment (note the name “Breezy Manor” emblazoned over the tent flap), was one of those camps affected by flooding in 1949. 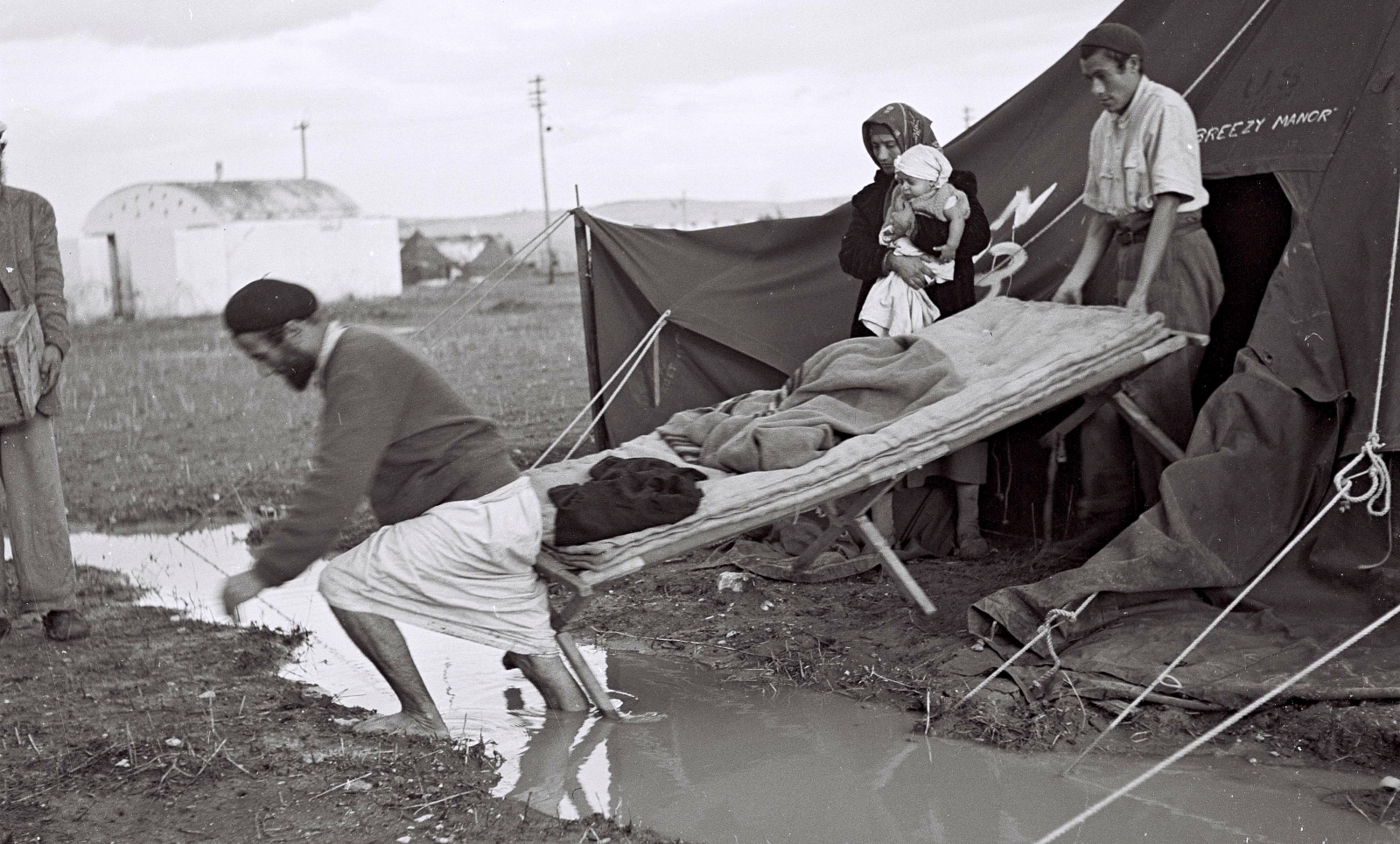 A dry spell between the rains of 1949 allowed new immigrants in Rosh Ha’ayin to remove their belongings and move to drier areas within the camp.Credit: GPO

City residents weren’t immune to the vagaries of bad weather either, with many Tel Aviv neighborhoods– new and old –affected by water. 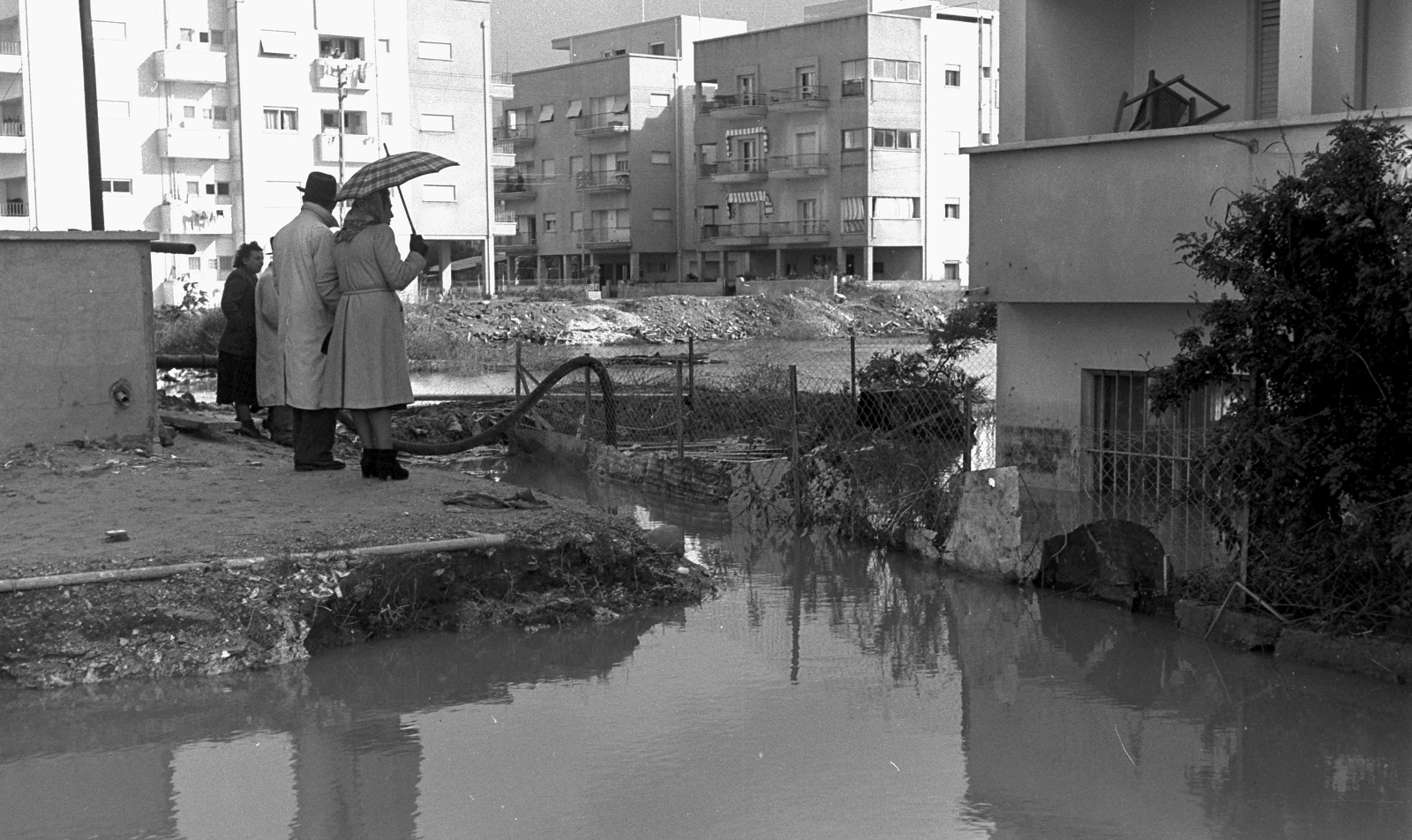 This was followed by snow in 1950. However, the winter of December 1951 was particularly harsh, with storms that lasted for 11 or 12 straight days. 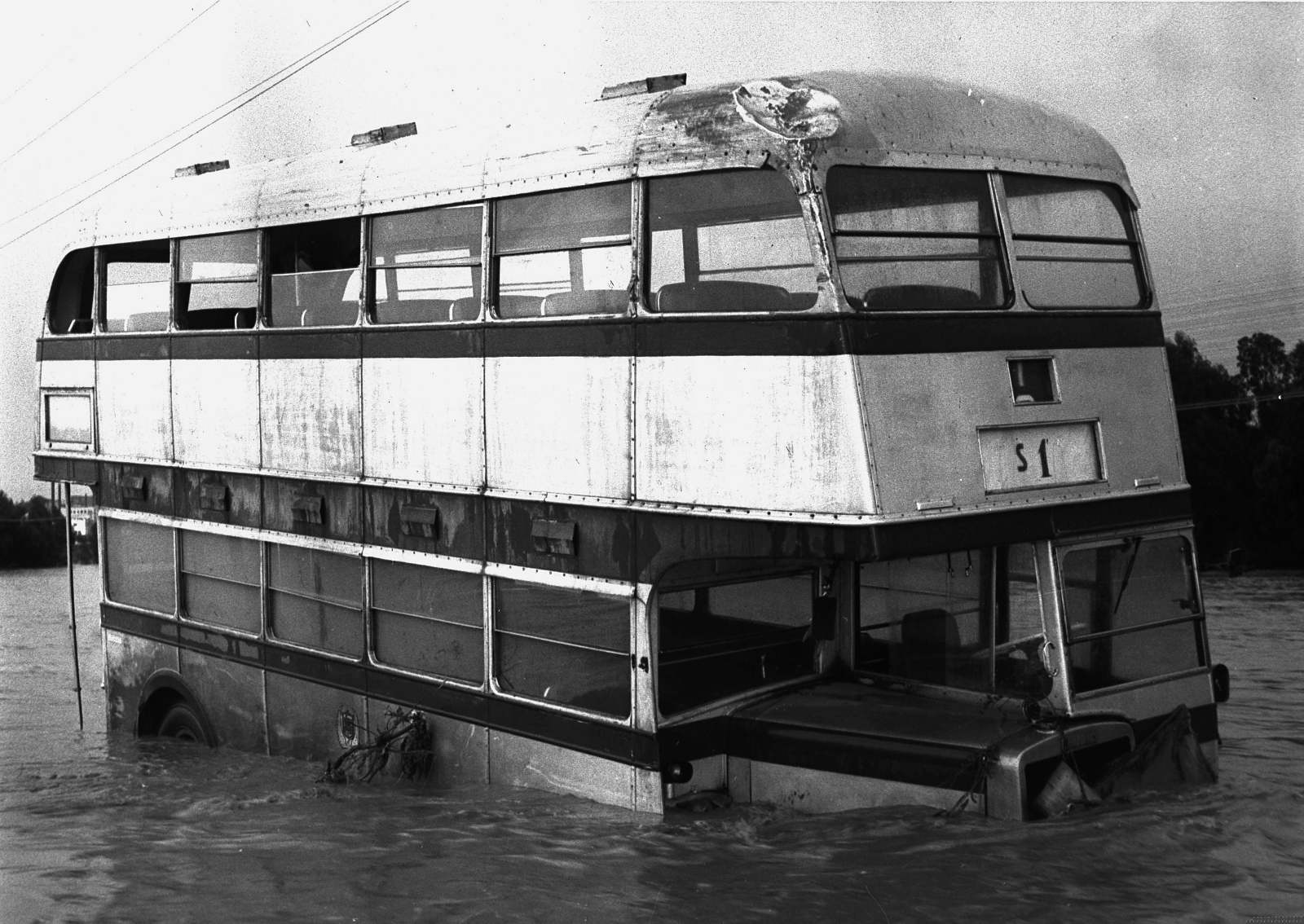 Despite the rain in 1955, nothing could keep literature-loving Tel Avivians from a 90%-off sale at the Pales bookstore at 119 Allenby Street. 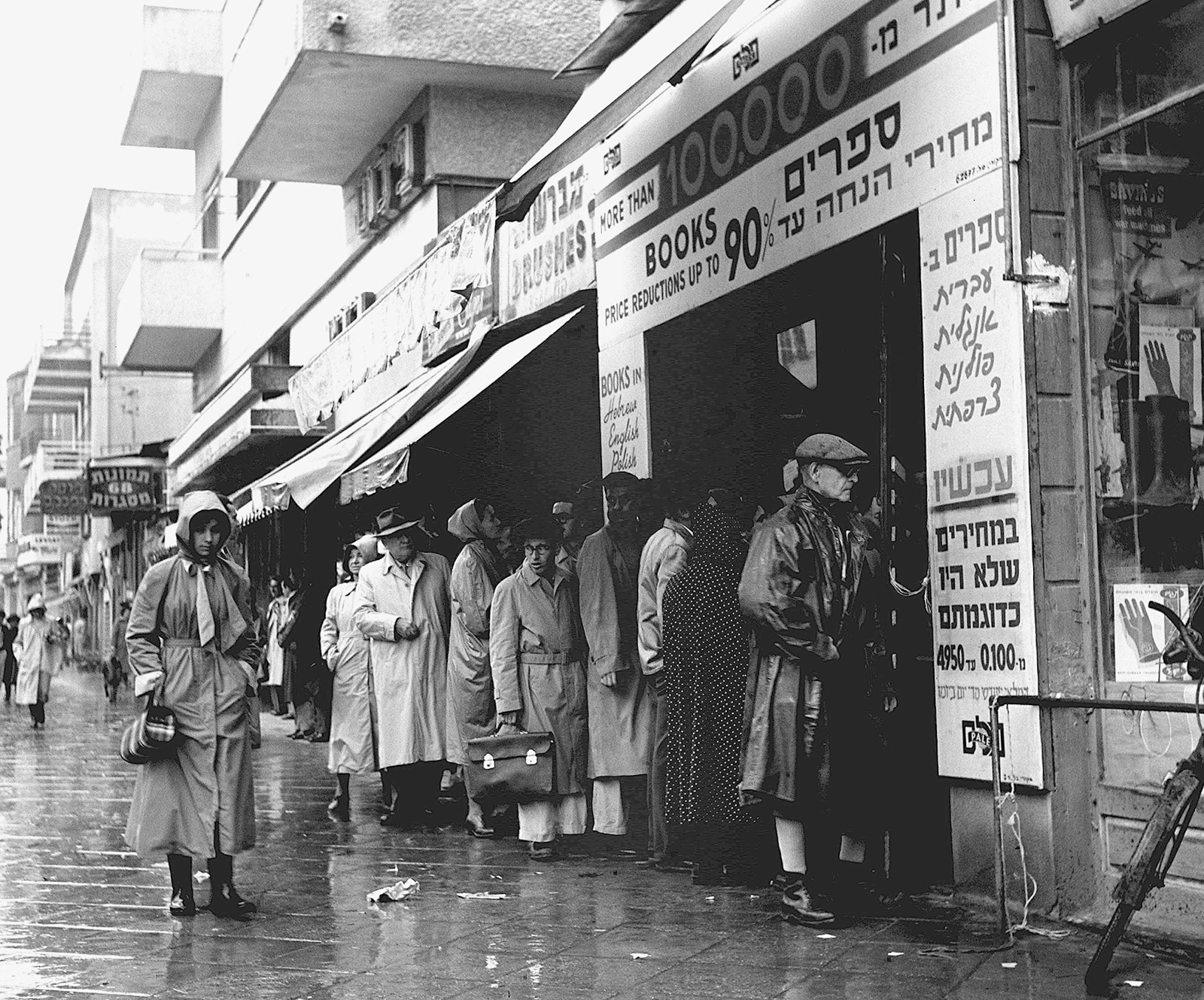 Book lovers line up for bargains on rainy Allenby Street in 1955. Credit: GPO

The heavy rain that year washed out the Montefiore neighborhood in southern Tel Aviv. 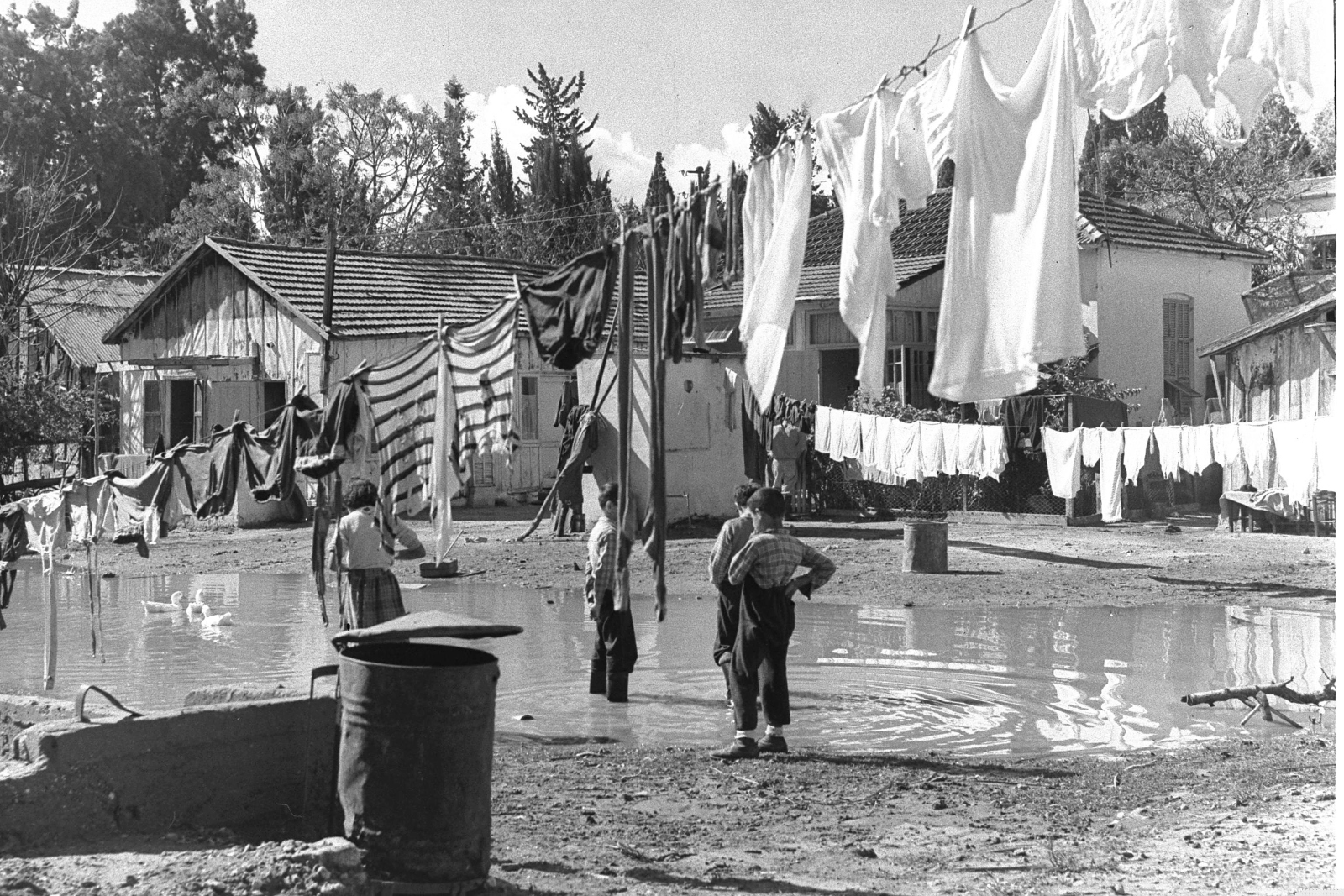 Flooding in Tel Aviv’s Montefiore neighborhood in 1955, a boon for local ducks and kids, but not so much for the adult residents. Credit: GPO 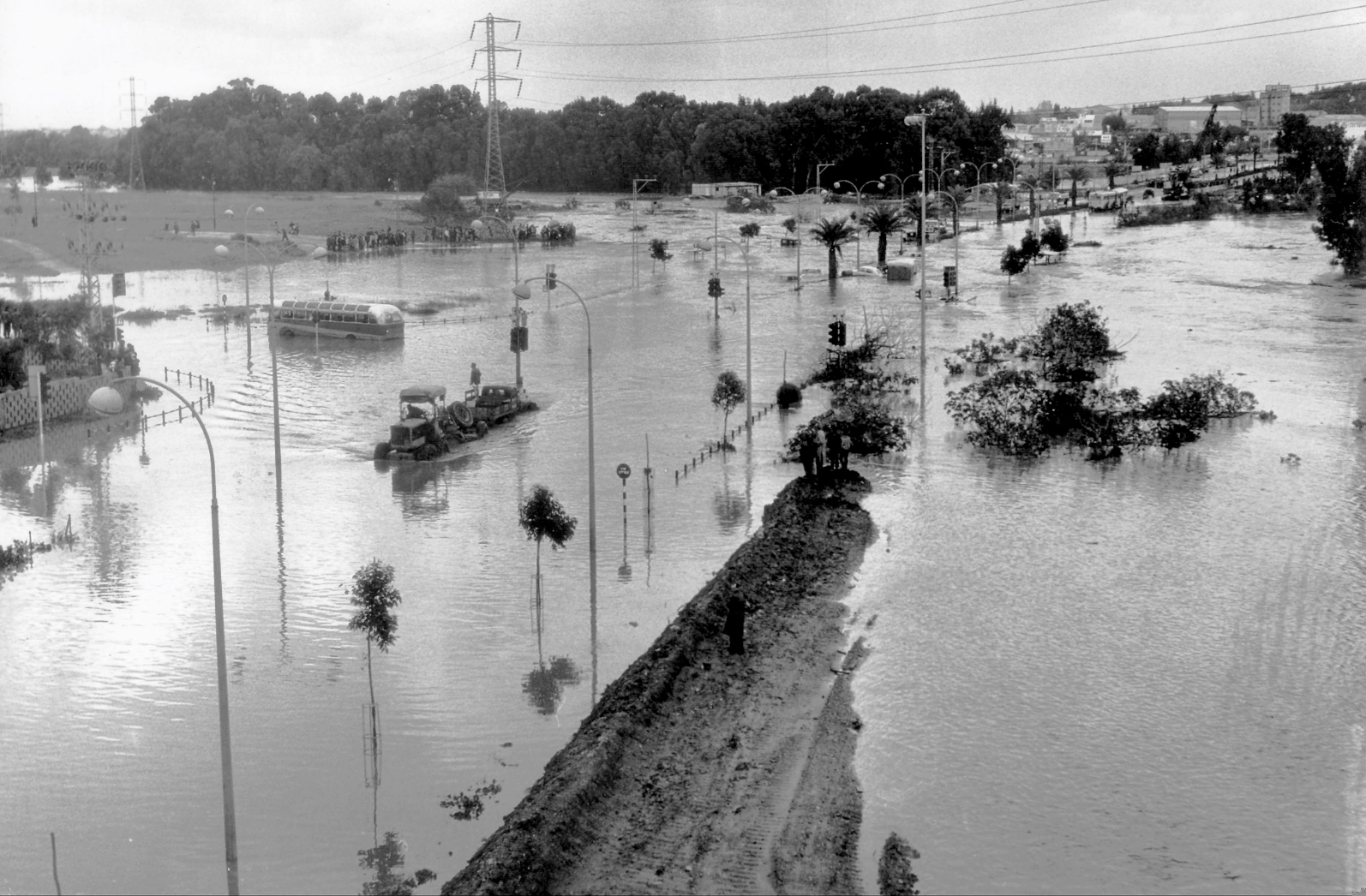 Runoff to the Ayalon River overflows onto the intersection adjacent to the North Train Station (today’s Savidor Station). Credit: GPO

In 1962, it even rained in May as crowds lined the streets for the annual Independence Day parade. Wet weather almost caused the annual IDF Air Force airshow to be cancelled. Fortunately, the sun came out towards the end of the parade and the airshow went ahead as planned. 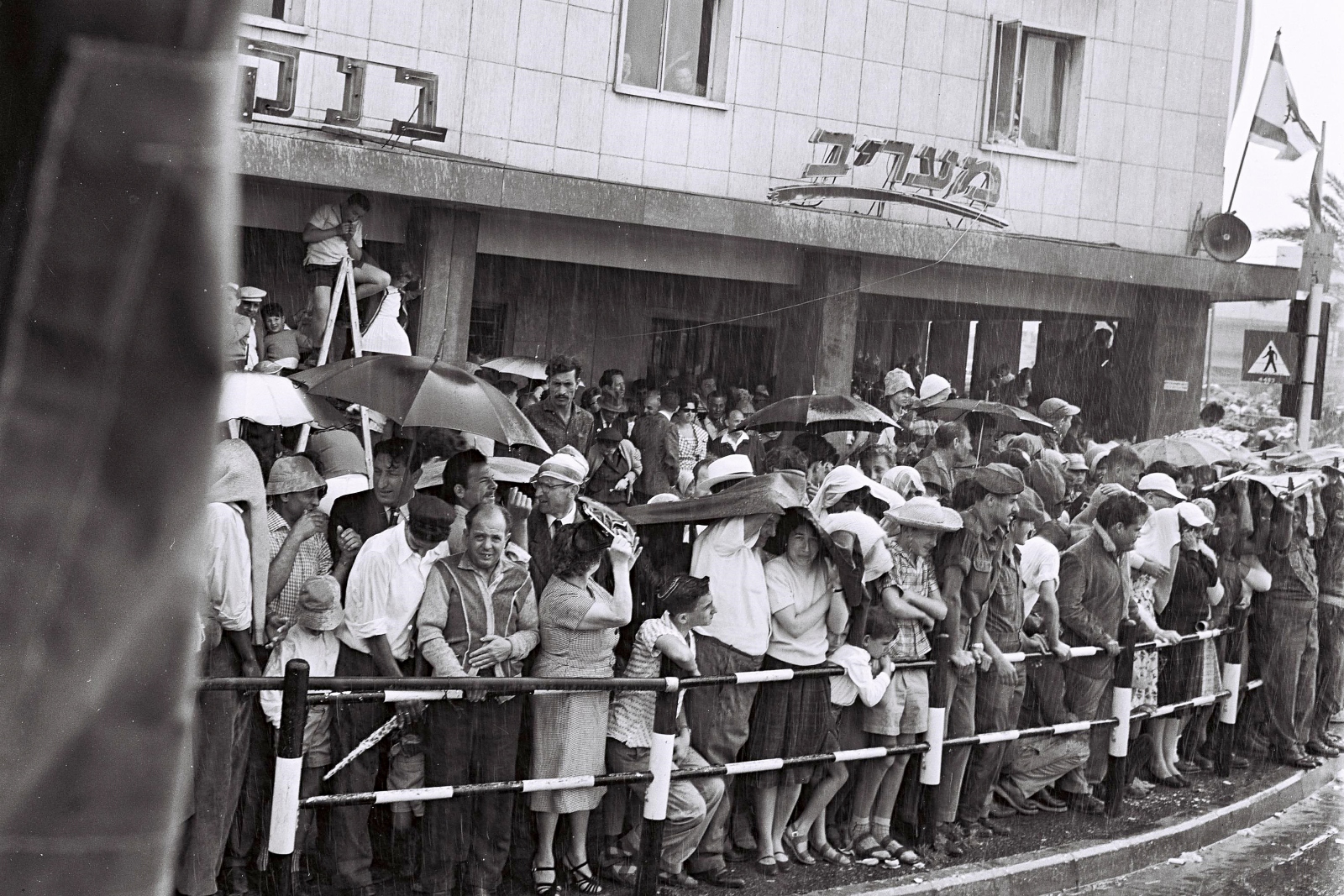 Parade-goers braving the rain in front of newspaper headquarters Beit Maariv. The iconic building was demolished in December 2019. Credit: GPO

As happens each year, rains of 1974 caught Israel unprepared. The Montefiore neighborhood – now well-known for its many car repair garages – was, once again, under water. 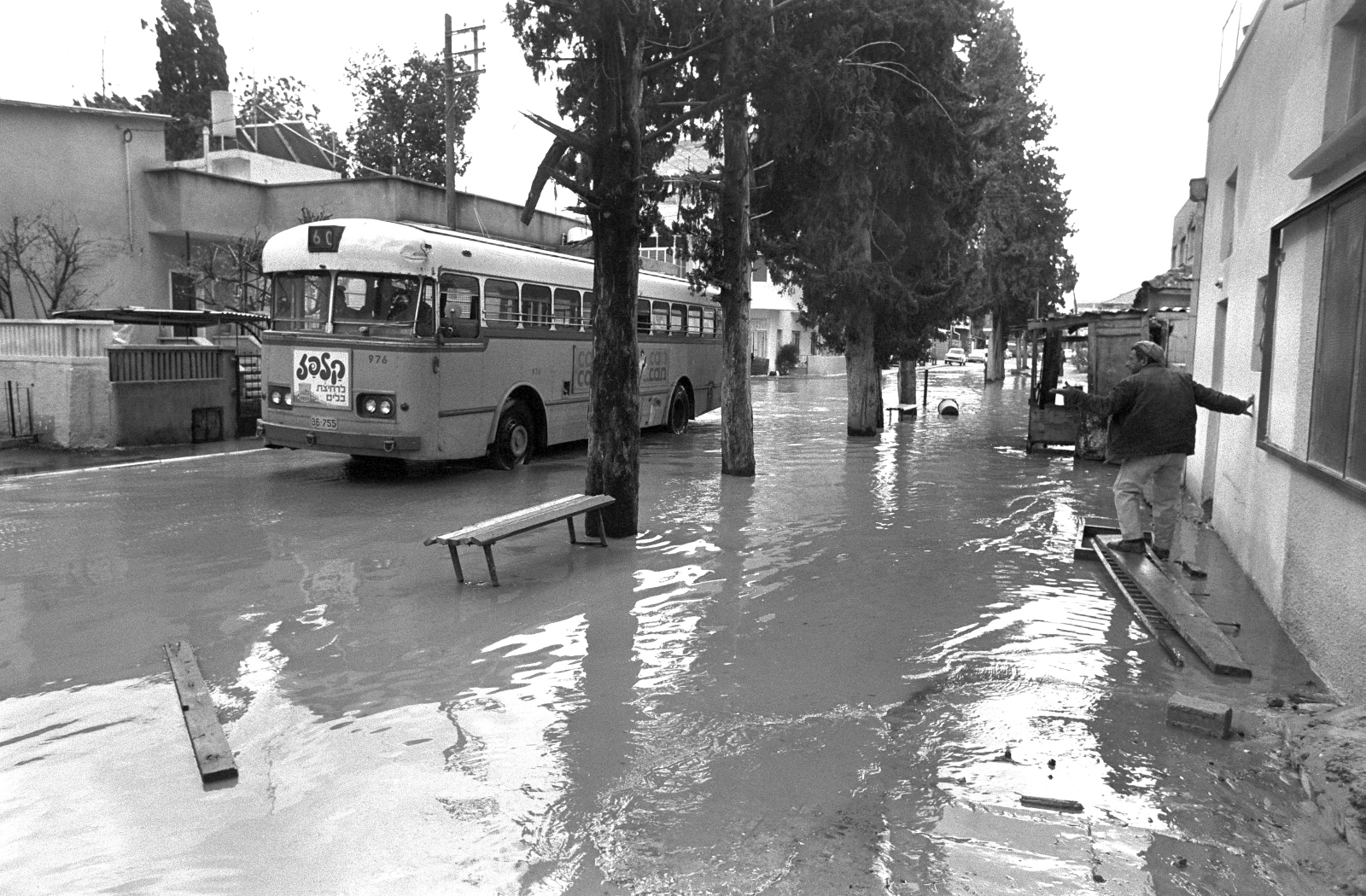 But it was the torrential winter of 1992 – still the record-breaking year for rainfall in Israel – that wreaked havoc on the municipal infrastructures of Tel Aviv and Ramat Gan, still struggling with the after-effects of the First Gulf War only a year before.

On January 1, 1992, two friends left work early to shoot an amateur video, now posted in its entirety on YouTube. The video shows the extent of flooding all around Tel Aviv and is an amazing documentation of the day’s events.

In 2000, the rains came in October and inundated the entire Dan region. Rescue crews were called in to evacuate residents of Bat Yam, with police patrolling the streets by hassekeh, an Israeli invention used by lifeguards since the early 1930s.

Will Tel Aviv ever be prepared for rain? How best to meet the challenges posed by a drainage infrastructure that hasn’t kept pace with the city’s rapid growth?

Some problems, like the topography of certain low-lying neighborhoods – such as Montefiore – may be insurmountable. Other occurrences, like a freak downpour that happens only once in many decades, present risks a city may be willing to take, considering the high infrastructure costs.

There is some light breaking over dark horizon: Israel’s Planning Administration recently issued draft guidelines for urban runoff management that would provide a long-term solution. When it comes to infrastructure, the experts say, there are no short-term solutions.