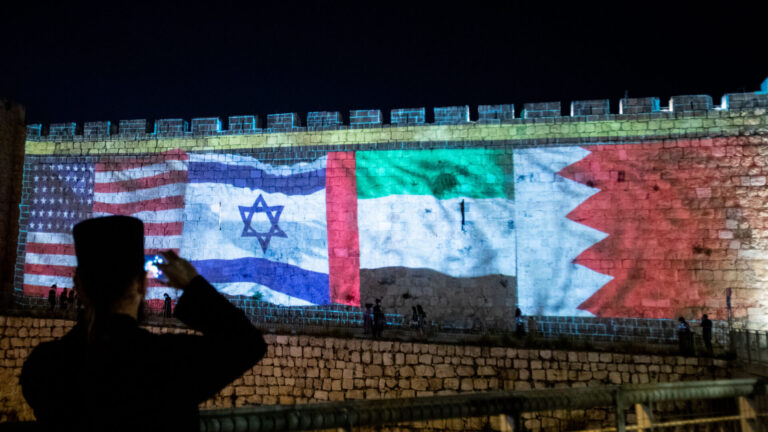 The flags of the US, United Arab Emirates, Israel and Bahrain are screened on the walls of Jerusalem's Old City, on September 15, 2020. Photo by Yonatan Sindel/Flash90

The signing ceremony was hosted by US President Donald Trump at the White House. Copies of the agreement in English, Hebrew and Arabic were signed by all parties.

“We have just finished a historic visit to Washington during which we signed the documents to establish two peace agreements with two Arab countries,” Netanyahu said on his way back to Israel afterward.

“The citizens of Israel will see the fruits of these agreements very quickly, but they will be with us for generations. Everyone who was there understood that we made a historic turning point for the State of Israel and for peace.”

Those fruits are already ripening in many different areas in the UAE, following the normalization agreement announced August 13.

Myriad activities already happening include joint stem-cell therapy research, expansion of an Israeli shoe-store chain to the UAE, the filming of an Israeli lingerie ad campaign in Dubai, and other mutual projects ranging from entertainment to healthcare.

The Bahrain agreement was announced on September 13, just before the leaders went to Washington.

Trump stated that about five additional Gulf countries are expected to sign similar normalization agreements with Israel in the coming months.

The countries will exchange embassies and ambassadors, begin direct flights between their countries, and launch cooperative initiatives across sectors including health, business, technology, education, security, agriculture and tourism.

The two populations are eager to explore one another’s countries. Watch below a live chat (in English) between Israeli travel blogger Lonely Peleg and Emirati travel blogger UAE Outdoors.

We are so excited that, as of today, our friends from the United Arab Emirates can soon give us a visit! And we know when it comes to traveling to Israel and the UAE, we have a lot of questions. Watch our travel blogger friends – Lonely Peleg- לונלי פלג, and our new friend from the UAE, Khalifa Al Mazrouei, answer some questions that we might have.