This picture was taken at the 2013 Vegan Fest.

This picture was taken at the 2013 Festival for Animals.

Israel will host the world’s largest vegan festival, October 13 at Park Leumi in Ramat Gan from noon to 11pm. Some 15,000 ticket-holders are expected at Vegan Fest, (www.vegan-fest.com) which will feature 100 food stalls, top musicians, celebrity guests and a full roster of speakers including Prof. Richard Schwartz, president of the Jewish Vegetarians of North America.

This may surprise anyone who knows how much Israelis prize their lamb and turkey shawarma and their chicken schnitzel.

But according to the latest statistics, Israel has the largest percentage of vegans per capita in the world – nearly four percent of the population, or about 300,000 — in addition to about 560,000 vegetarians. (Vegans consume no animal products at all, while vegetarians may eat dairy, eggs and other animal-derived foods.)

Omri Paz, 32, founder of VeganFriendly, organized Israel’s first Festival for Animals and meat-free Independence Day barbecue last year. These were deemed a great success – about 10,000 people came to the animal festival, which focused on veganism. 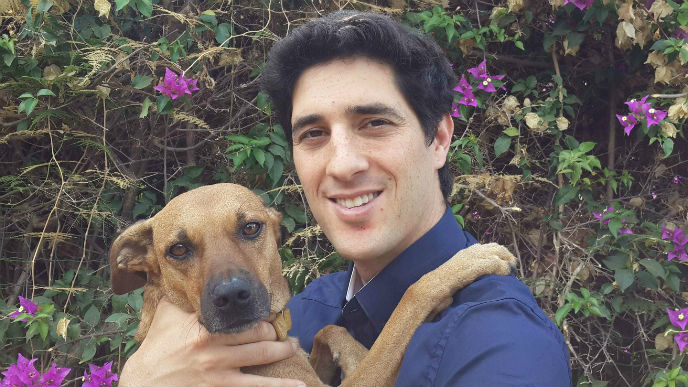 Paz says this year’s huger-than-ever happening, complete with major corporate sponsors including Domino’s Pizza, is thanks to two significant events: Israeli model Rotem Sela made a video  for VeganFriendly about the cruelty of the dairy industry; and Tal Gilboa, one of Israel’s most prominent animal-rights activists, won the 2014 season of Big Brother.

Gilboa influenced not only some fellow contestants to reassess their consumption of meat but also caused quite a revolution among the Israeli fan base of the hugely popular reality TV program.

After her win, the Israeli financial magazine Globes surveyed Big Brother viewers and found that 60% are planning to change their eating habits as a result of Gilboa’s impassioned pleas and showing videos from slaughterhouses, commercial chicken coops and other places that turn animals into comestibles.

“I think this topic is completely exploding all over Israel,” Paz tells ISRAEL21c. “You can see it in the vegan menu items at restaurant chains, [natural foods market] Eden Teva labeling 5,000 products as vegan, and our video with Rotem Sela that went viral. Last year we called it Festival for Animals, but this year we’re confident to call it Vegan Fest because the idea is more mainstream.”

How does he know Vegan Fest will be the biggest on the planet? A quick Internet check was enough to establish that vegan festivals in Canada and in Germany attracted a few thousand participants, nowhere near the numbers Paz is expecting for his half-million-shekel production.

Since it is taking place during the holiday of Sukkot, there will be a sukkah at the park, and lots of kids’ activities while their parents learn about the environment, health and nutrition, take sample yoga and Pilates classes and sample plant-based cuisine.