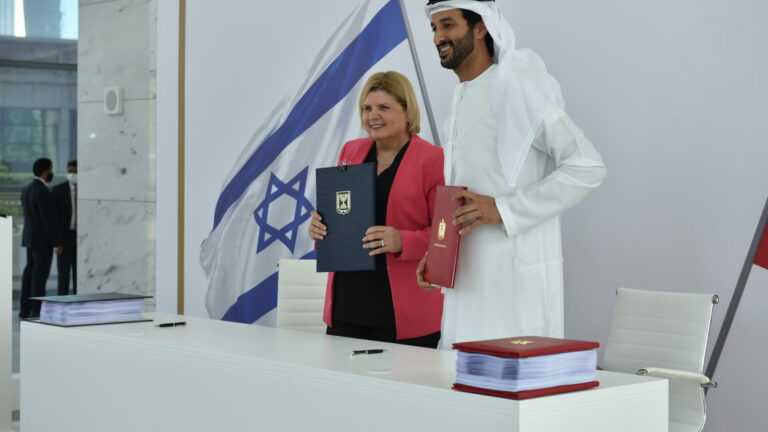 In a historic first, Israel today signed a free trade agreement in Dubai with the United Arab Emirates in a move designed to further boost trade and investment ties between the two countries.

The pact, which was signed by Israel’s Economy and Industry Minister Orna Barbivau and her counterpart, UAE Minister of Economy Abdulla bin Touq Al Marri, will eliminate tariffs on around 96 percent of products. This will include food, medical equipment, medicine, agricultural produce and cosmetics.

It is estimated that the agreement, which took five months to negotiate, will boost bilateral trade to more than $10 billion a year, within the next five years.

This is Israel’s first free trade agreement of this kind with an Arab state and comes two years after UAE and Israel signed a normalization agreement in September 2020.

“This is a visit of strategic importance for economic relations between the State of Israel and the United Arab Emirates – the first free trade zone agreement with an Arab state,” said Barbivay.

“The free trade zone agreement which we signed this morning is expected to strengthen bilateral trade, to break down obstacles and to advance new economic opportunities and partnerships, that will serve as a basis for our shared path,” she said.

“This agreement will accelerate economic growth and strengthen the common belief that the only way to build durable and sustainable economies in the complex world is together.

“This agreement represents something larger than business: the importance of building significant partnerships. Our agreement can prove to countries and governments around the world that cooperation and dialogue are the best way to transform challenges to opportunities.”

In a post on Twitter, UAE’s Minister of State for Foreign Trade, Thani Al Zeyoudi, said that with the signing of the trade deal “we have written a new chapter in the history of the Middle East.

“Our agreement will accelerate growth, create jobs and lead to a new era of peace, stability, and prosperity across the region,” he wrote.

With the #UAEIsraelCEPA signed, sealed and delivered, we have written a new chapter in the history of the Middle East. Our agreement will accelerate growth, create jobs and lead to a new era of peace, stability, and prosperity across the region.

Since the establishment of the Abraham Accords, trade in goods between the UAE and Israel has significantly increased, reaching $885 million in 2021, according to Israel’s Ministry of Economy.

In the last two years, the relationship between Israel and the UAE has flourished enormously, with deals and memorandums signed in many different areas including business, trade, education, travel and the environment.

“The comprehensive agreement between our countries is expected to accelerate economic activities even more,” said Al Zeyoudi, adding that he expects it will create opportunities for research, new investments in technology, agricultural technology, and renewables.

“Throughout the last year and a half, we have proven what can be achieved when differences and arguments are put to the side. We are willing to rest on these foundations and to promote a new era of opportunities and entrepreneurship for our citizens, to base our relations on mutual respect, tolerance, open and honest discourse and thought and action. We have no doubt that this agreement will lay the path to a new era of economic prosperity in our region,” he said.

UNCOVER ISRAEL - Get the ISRAEL21c
Weekly Edition free by email
Sign Up Now!
Bring Israel's story to life.
Millions of people around the world rely on us to gain a deeper understanding of Israel. We are the trusted source for original content you won't find anywhere else.
You can make a difference. Donate today to support journalism that brings Israel’s story alive.
SUPPORT ISRAEL21c
Read more on:   News, Business, United Arab Emirates, Abraham Accords