Tel Aviv life gets back to normal as Israel lifts restrictions on wearing a mask outdoors. Photo April 22, 2021 by Miriam Alster/Flash90

Israel’s aggressive vaccination policy recorded another win on Saturday when just 13 new coronavirus cases were recorded in the country – the lowest rate in 14 months, according to data released by the Health Ministry this week.

On Saturday, 9,238 coronavirus tests were conducted across the country, according to the ministry, and just 0.1 percent of these returned positive.

While weekend figures are always lower than weekdays, as testing is reduced, the new figures still show a drop from the weekend before, when 0.5 percent of tests returned positive.

They also come as the number of serious cases dropped to 100, including 60 people on ventilators, out of the 1,310 active cases in the country.

Also on Sunday, the Israel Defense Forces announced that it was Covid-free for the first time since the outbreak began. It recorded zero active cases among its ranks.

In March, the military announced that it had reached herd immunity from the disease, with more than 80 percent of all service people either vaccinated or recovered from the virus.

The first case of Covid-19 in Israel was on February 21 2020 when a female citizen tested positive after a return from quarantine on the Diamond Princess ship in Japan.

Rates peaked in January this year in a third wave that saw 10,000 new cases a day. Since the outbreak started some 838,576 have tested positive in the country for the virus. 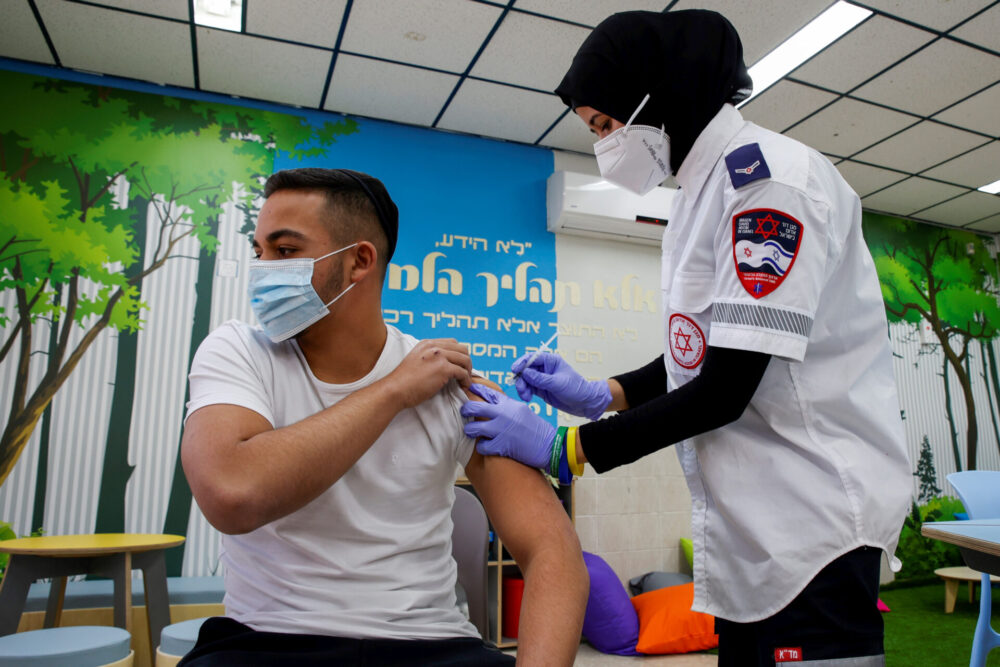 Israeli students get vaccinated in Beersheva, March 2021. Photo by Flash90

Israel began its vaccination program with the two-shot Pfizer-BioNTech vaccine in late December, and has managed to inoculate more than 60 percent of its total population, and 80 percent of the eligible population over the age of 16, to reach more than 5.4 million people.

It is the highest per capita vaccination rate in the world.

In April, experts suggested that the country had reached herd immunity.

With infections dropping, Israel has rolled back many restrictions on public life. Schools, restaurants, cafes, museums and shops have reopened, and in April the government lifted the requirement to wear face masks outside.

On May 23rd, Israel will reopen its borders to group travel for vaccinated foreigners. This will be the first time that non-residents, with a few exceptions, will be allowed into the country since Israel entered its first lockdown in March last year.

The country plans to start vaccinating children aged 12-15 as soon as the US Food and Drug Administration approves vaccine use for children in that age group.