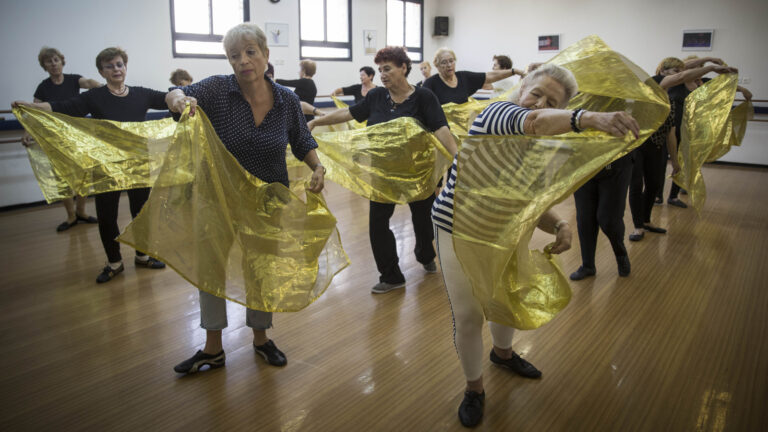 A dance class for 60-90-year-old women at a community center in Jerusalem. Photo by Hadas Parush/Flash90

A new study on global healthy life expectancy shows that Israelis are among the healthiest people in the world and boast long life expectancy. An international team of researchers surveyed data for 188 countries to measure the quality of life in today’s world.

Singapore and Andorra placed second and third respectively among the highest healthy life expectancies, followed by Iceland, Cyprus and Israel. Rounding out the top 10 are France, Italy, South Korea and Canada.

“The world has made great progress in health, but now the challenge is to invest in finding more effective ways of preventing or treating the major causes of illness and disability,” said Professor Theo Vos of the Institute for Health Metrics and Evaluation (IHME) at the University of Washington. The study was conducted by an international consortium of researchers working on the Global Burden of Disease study and led by the IHME.

The study’s researchers use DALYs, or disability-adjusted life years, to compare the health of different populations and health conditions. One DALY equals one lost year of healthy life and is measured by the sum of years of life lost to early death and years lived with disability, a press statement explains.

The leading global causes of health loss, as measured by DALYs in 2013, were ischemic heart disease, lower respiratory infections, stroke, low back and neck pain, and road injuries.

According to the study, countries with the lowest rates of health loss include Italy, Spain, Norway, Switzerland, and Israel.

“Factors including income and education have an important impact on health but don’t tell the full story,” said IHME Director Dr. Christopher Murray. “Looking at healthy life expectancy and health loss at the country level can help guide policies to ensure that people everywhere can have long and healthy lives no matter where they live.”

The Central Bureau of Statistics in Israel shows that life expectancy in 2013 was 83.9 years for women and 80.3 years for men.