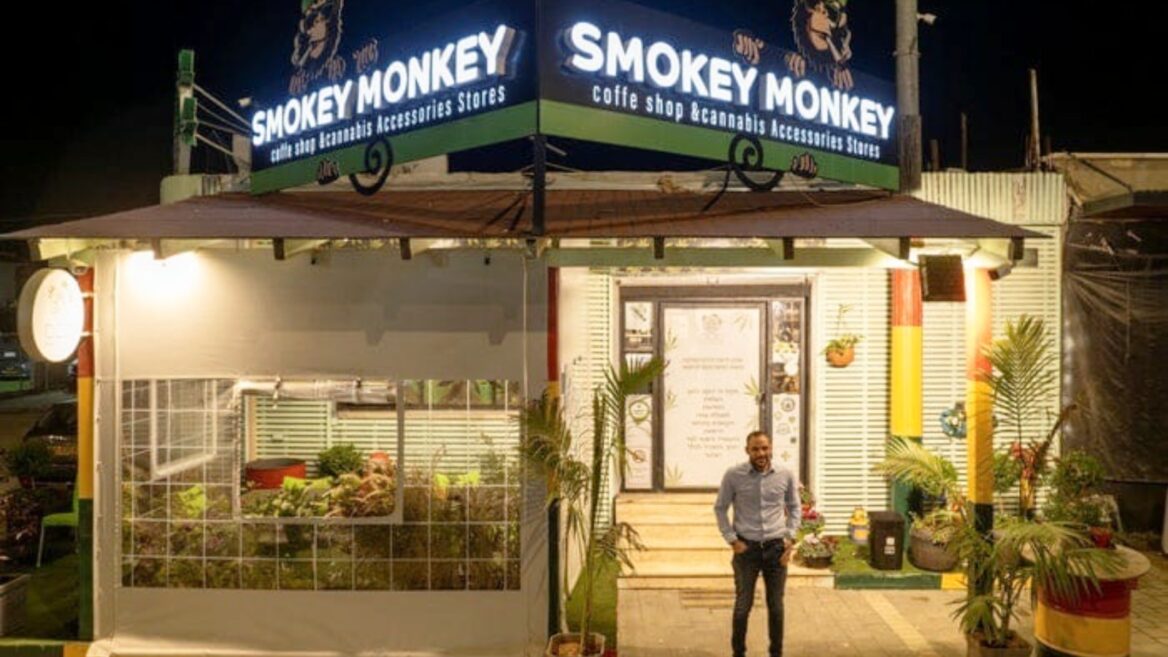 Shbeeta doesn’t sell cannabis there. Rather, he guides people through the process of obtaining prescriptions for medical cannabis. At Smokey Monkey, they can “sit and be with others and learn about its use.”

While working as a nurse in a psychiatric ward and a nursing home for several years before opening Smokey Monkey, Shbeeta saw that “doctors prescribed narcotics to patients who soon became addicted to drugs like OxyContin or Fentanyl, a synthetic opioid, which they would then buy on the black market.”

He decided to explore the field of medical marijuana because he believed it would help people in a “more natural and safer” way and can improve the quality of life for people who suffer from chronic illnesses, PTSD or lingering effects of injuries. 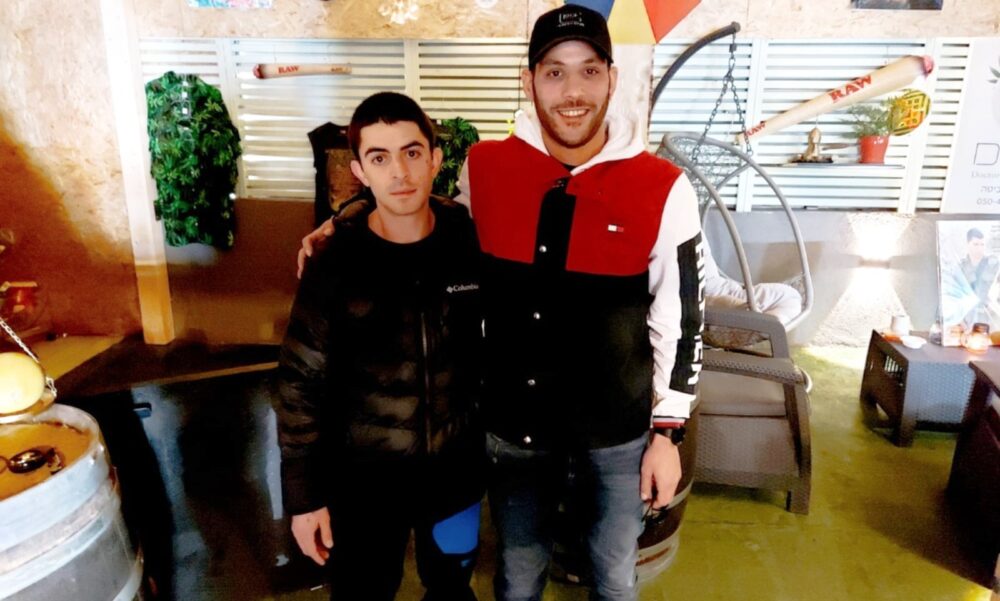 Karam Shbeeta, right, with Oz Zahavi, who was in a car accident. Zahavi now works at Smokey Monkey. Photo courtesy of Smokey Monkey

When patrons come to Smokey Monkey, Shbeeta can help them find a doctor through his unofficial network of physicians, including orthopedists, psychiatrists and neurologists, who provide prescriptions for medical cannabis.

People can then fill the prescriptions at a pharmacy next door and return to Smokey Monkey to receive instructions about its usage.

His goal, he said, is to “end the stigma” about medical marijuana and raise awareness about its benefits in Israel as well as the Arab world.

“There are many different varieties of medical cannabis and I want to find what’s best for people,” he said.

Medical cannabis use is legal in Israel, but patients must obtain a special license from the Health Ministry and don’t always know what to buy or where to buy the product.

Shbeeta said that Smokey Monkey eliminates the need for people to “go to the black market to buy marijuana and not know what they are getting.” Now, he said, they are doing it legally with supervision.

Because the prescription must be renewed every six months, Shbeeta said that people have the opportunity to evaluate the drug’s efficacy.

Studies suggest that the major psychoactive substance in medical cannabis, THC, may help chemotherapy patients to relieve their nausea and increase their appetite. Other research shows that it can aid patients with Parkinson’s disease, provide pain relief and ease many other conditions. 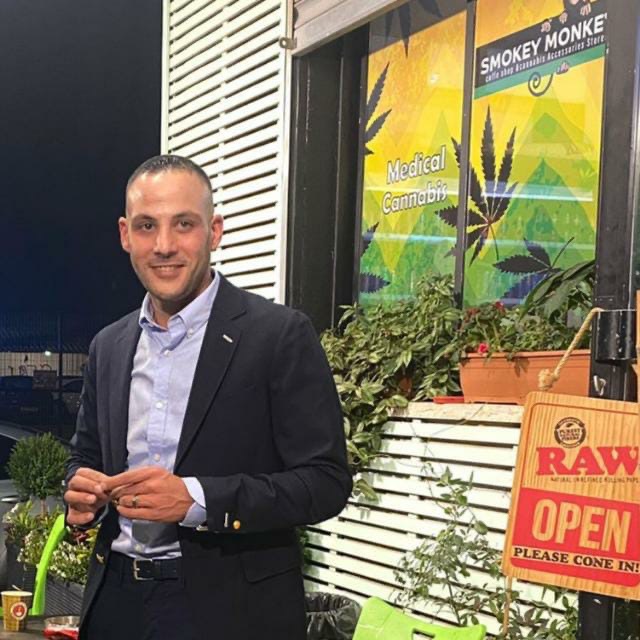 Since he opened, about 50 to 80 people come to Smokey Monkey every day “from all over Israel.”

In the morning, retired people come to the shop. In the evening, he said, it’s mostly young people. Unlike in a coffee shop in Amsterdam, only people with medical prescriptions can use the substance on his premises.

His vision is to have different rooms at the café for different age groups. He plans to have occupational therapists and speech therapists to help older people, a room with computers for people working in high-tech, and even a room with an Xbox for younger people.

“I really believe in this,” Shbeeta said.

The world of medical cannabis

The idea for Smokey Monkey came to him when he was working in the psychiatric ward and asked himself, “What will I do with my future?”

For a while, he drove around to schools and other institutions selling defibrillators, medical devices that help restore heartbeat after a sudden cardiac arrest. He understood the importance of having this equipment but “people looked at me like I was a telephone salesman.”

He then decided to explore the world of medical cannabis.

It hasn’t been easy for Shbeeta, he said. In Muslim society, it’s forbidden to drink alcohol and people at first thought “it was like I was selling hashish that would lead to harder drugs.” 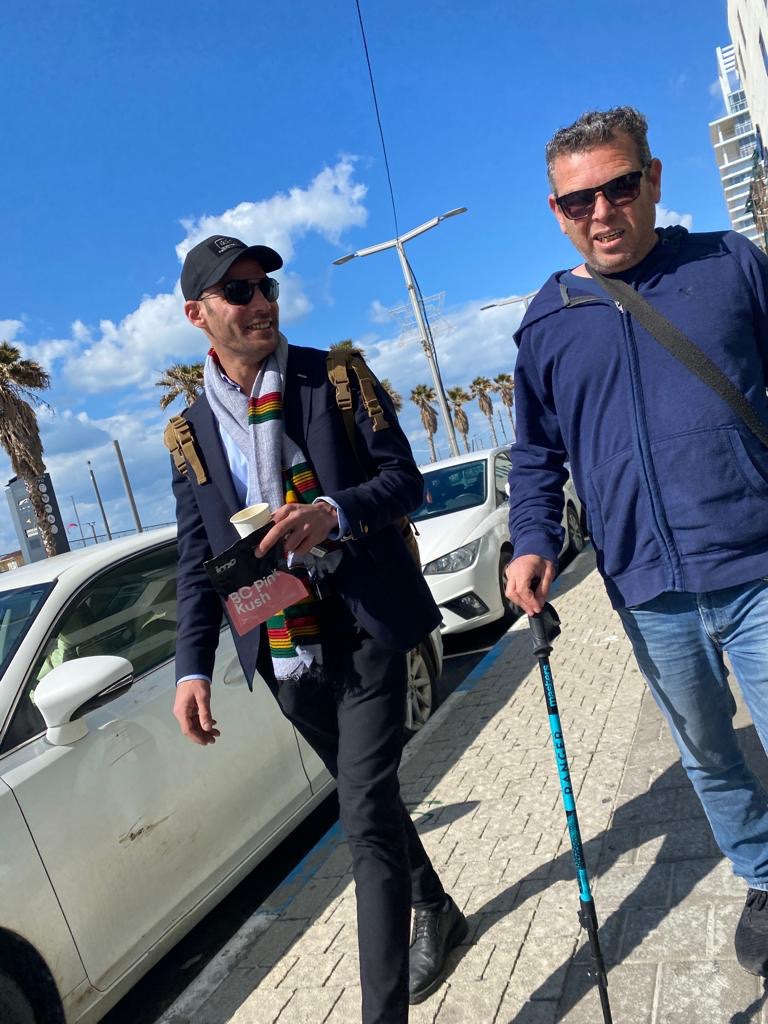 Right after opening the café, he got death threats. To show that he wasn’t afraid, he took a selfie in front of his shop and slept there for a week.

“I waited but nobody came,” he said. “I’m a very normal person. I think people realized that this is a place where I am a professional. I know the varieties of what I’m selling and I follow the law.”

One of the additional, unexpected benefits at Smokey Monkey, Shbeeta said, is that it has become a meeting place for both Arabs and Jews.

“I believe that if we put politics aside, we can be together,” Shbeeta said. “Muslims believe that Jews are our cousins. To me, they’re my brothers.”

UNCOVER ISRAEL - Get the ISRAEL21c
Weekly Edition free by email
Sign Up Now!
Bring Israel's story to life.
Millions of people around the world rely on us to gain a deeper understanding of Israel. We are the trusted source for original content you won't find anywhere else.
You can make a difference. Donate today to support journalism that brings Israel’s story alive.
SUPPORT ISRAEL21c
Read more on:   Health, medical cannabis, Israeli Arabs, Smokey Monkey