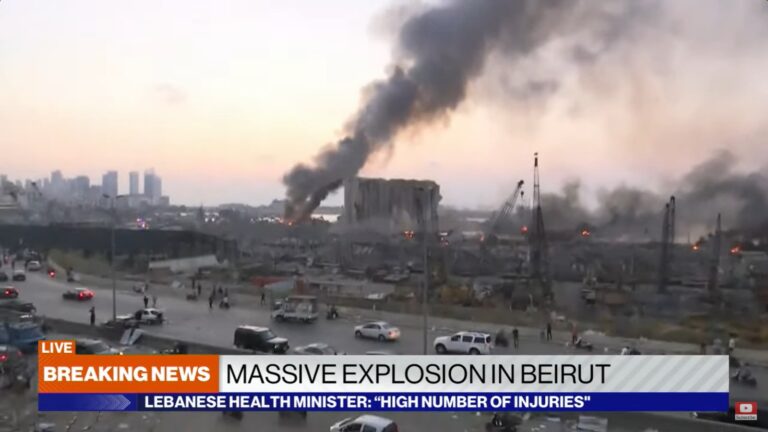 Screenshot from ABC News video of the Beirut warehouse explosion on Aug. 4, 2020.

Following a deadly chemical explosion Tuesday evening at a warehouse in Beirut, the Israeli government, aid organizations and hospitals rushed to offer assistance.

Lebanese President Michel Aoun said that unsafe storage of 2,750 tons of ammonium nitrate in a warehouse at the port started a fire, which triggered a huge explosion and additional fires.

At least 100 people are dead and more than 4,000 injured in the capital city. Rescue workers are searching for more victims amid the rubble. Hundreds of thousands are left homeless.

Israel’s response was immediate, despite a history of conflict between the two countries and current tensions caused by the Hezbollah terrorist group entrenched in Lebanon on Israel’s northern border.

“This is the time to transcend any conflict,” tweeted the Israel Defense Forces spokesperson after the explosion.

Prime Minister Benjamin Netanyahu’s office reported that Netanyahu immediately “instructed the head of the National Security Council Meir Ben-Shabbat to talk to the UN envoy Nickolay Mladenov to find out what else Israel can do to help Lebanon.”

“We share the pain of the Lebanese people and sincerely reach out to offer our aid at this difficult time,” President Reuven Rivlin tweeted on Tuesday night in English, Arabic and Hebrew.

Under the direction of Minister of Defense, Benny Gantz and Minister of Foreign Affairs, @Gabi_Ashkenazi, Israel approached Lebanon through international defense and diplomatic channels to offer the Lebanese government medical humanitarian aid.

Mladenov acknowledged Israel’s offer, posting on Twitter: “The region and the world must come together to help the people of Lebanon through this time of anguish.”

Nonprofit aid organizations based in Israel also are reaching out to Lebanon. One group, SmartAID, released a statement that it is assessing the situation with the help of global aid partners and stands ready to provide medical equipment, solar-powered lanterns, chargers for cell phones, clean water and basic relief items.