The Israeli Tourism Ministry has stepped up marketing campaigns in India and China, hoping to increase the numbers of incoming travelers from these major emerging markets for tourism.

Some 40,000 Indians and 47,000 Chinese visited Israel during 2015. While still a drop in the pan in terms of potential – about 20 million Indians and 120 million Chinese vacationed overseas in 2015 – the number of visitors from India and China is rising by 10-13% from year to year, according to the Tourism Ministry. Indian tourists on the Via Dolorosa in the Old City of Jerusalem. Photo by Serge Attal/FLASH90

“Breaking into the large Asian market — in particular China and India — is one of the main objectives set by the Tourism Ministry,” said Tourism Minister Yariv Levin, who hopes to attract 100,000 visitors per year from each country by 2018.

In August, the Tourism Ministry launched its first major TV advertising campaign in India, under the slogan: “On most vacations, you take a trip. But in Israel, you take a journey.”

The two-month, $1.6 million campaign – which includes social media as well as print and broadcast media spots — portrays Israel as not just a destination but rather an experience in history, culture and a contemporary lifestyle.

The Tourism Ministry is especially targeting the growing middle-class sector looking for unique destinations beyond the United States and Europe.

The average tourist to Israel from India spends $2,208 on services in the country on a 10.3 average night stay, according to the ministry’s 2015 tourist satisfaction survey. The same survey showed that 79% of Indian tourists are first-time visitors to Israel.

In May, Israel boosted its destination status when Bollywood star and fashion icon Sonam Kapoor made her first visit to Jerusalem, Tel Aviv and the Dead Sea. She also appeared on the June-July 2016 cover of Harper’s Bazaar Bride India modeling dresses and headgear by Israeli designers Tami Bar-Lev and Mira Zwillinger. “Israel is quite the haven for vegetarians. Israeli street food is very vegetarian-friendly – falafel, hummus and bourekas (baked pastries stuffed with cheese, mushrooms, potatoes and spinach),” Garg wrote in a food blog.

“There is nothing ‘balanced’ about food in Israel. ‘Strong’ and ‘distinctive’ would be the appropriate words to describe it… You would think otherwise of a country situated in the world’s biggest political hotspot. Get to it and it will debunk every preconceived notion you may have. It warmed its way up from my tummy to the heart.”

In keeping with the global food tourism trend, late last year the Tourism Ministry brought four leading Chinese chefs to Israel to give local restaurateurs tips on how to prepare Chinese cuisine.

“Normally they can’t make proper Chinese food because they don’t have the right ingredients,” Chen Qing told GBTIMES Beijing. “Beyond that, nobody was around to tell them whether they were cooking the food right or not. They ask me: can I make it like this? I say yes, I used to try it that way and it works, then they know it is OK. … I can also see things from them that maybe I’ve missed. So it works well to help us both.” 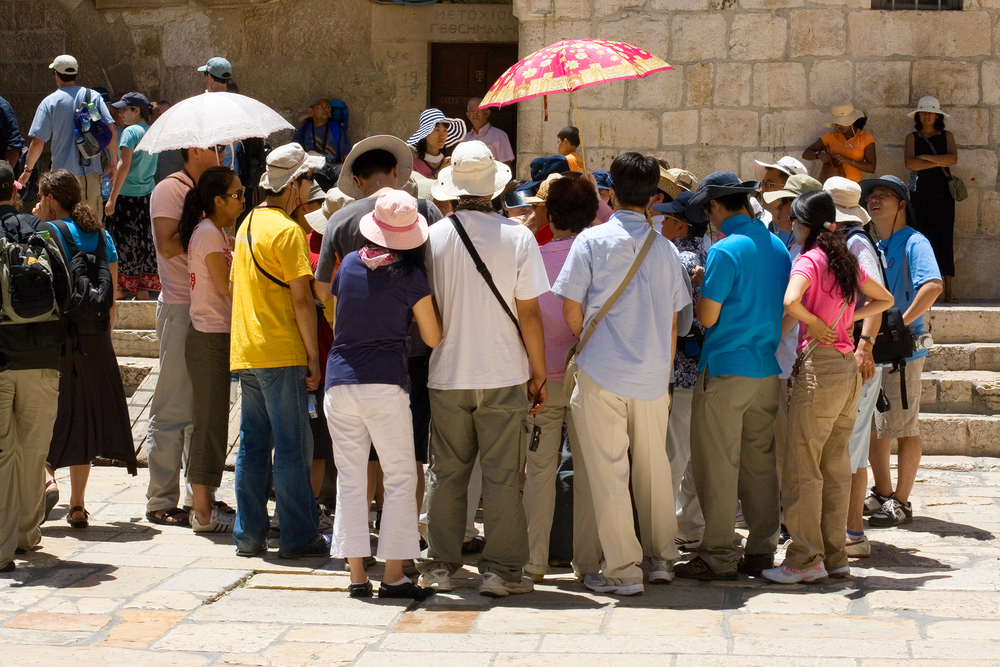 A group of Asian tourists listening to a guide at the entrance of the Church of The Holy Sepulcher, Jerusalem. Photo via Shutterstock.com

In April, Hainan Airlines, the largest private airline in China, launched the country’s first direct flight to Israel. Xin Di, chair of Hainan Airlines, said the Beijing-Tel Aviv route is intended to help advance cooperation between the two countries in trade, science and technology and tourism.

China and Israel have been best buddies these last few years in trade, high-tech and academic initiatives.

Now, to add more incoming tourism to this warm relationship, the Finance Ministry decided last March to cancel fees for tourist groups from China. Chinese tourists, who typically travel in organized groups, can receive a multiple-entry tourist visa valid for up to 10 years, with individual visits of up to 90 days.

“The approval of the 10-year multiple entry visa and the cancellation of fees for Chinese tourist groups are important steps that join other marketing steps to break into the Chinese market,” said Levin.