Israel is leading the world in getting its citizens vaccinated against Covid-19.

As of December 22, Israel had administered the first dose of the Pfizer/BioNTech Covid-19 vaccine to 83 citizens out of every 10,000. In second place was the United Kingdom, at 74 out of 10,000. The United States was a distant third, with 30 out of every 10,000 people vaccinated.

These statistics come from Our World in Data, a nonprofit project based at the University of Oxford that gathers and presents “research and data to make progress against the world’s largest problems.” 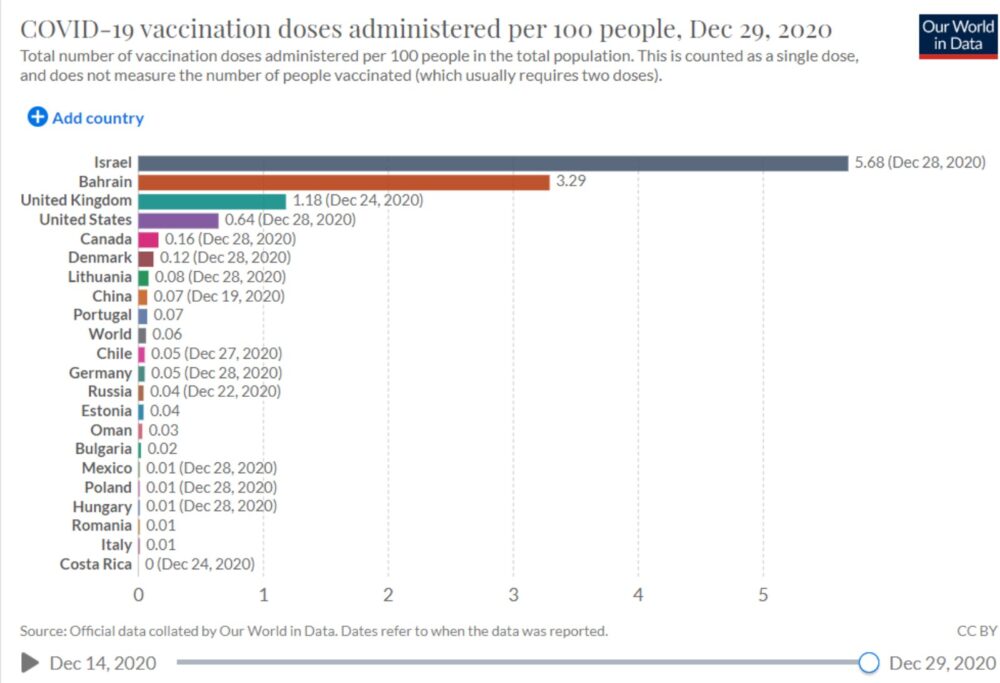 Dr. Jonathan Halevy, president of Shaare Zedek Medical Center in Jerusalem, said Israel can vaccinate six million people in 100 days. Some 2 million Israelis over age 60 will get vaccinated in the next two months.

He does not expect any shortage of the Pfizer/BioNTech or Moderna vaccines, which both require two doses.

Israel’s population is about 9 million, but 2 million Israelis are under the age of 16 and therefore cannot get vaccinated and another million probably have antibodies, Halevy said.

He said these two vaccines “should be safer than any vaccine in history in terms of side effects. Longer term, we have not seen significant side effects in the close to 100,000 people who already got it four months ago” during clinical trials.

“Nobody knows how long it will be effective,” he added. “And someone who got the vaccine could be contagious to others by spreading virus from the mucosa of the nose, even if he is immune. We still need to wear masks but hopefully we can ease social distancing rules in the first half of 2021.”

Regarding new mutations of the virus, Halevy told ISRAEL21c, “All authorities agree that the new mutations are sensitive to the vaccine, but it is still 99% and not 100%.”

As for BriLife, a vaccine being developed by the Israel Institute for Biological Research, Halevy said, “I think BriLife will be excellent, but it will take time. They are only starting Phase 2 with 1,000 volunteers. They may have to go to other countries [to get enough test subjects] for Phase 3. It could take a year or two.”

Halevy predicts that in mid-April, “we will be able to celebrate Passover with our families because a critical mass will be vaccinated.”