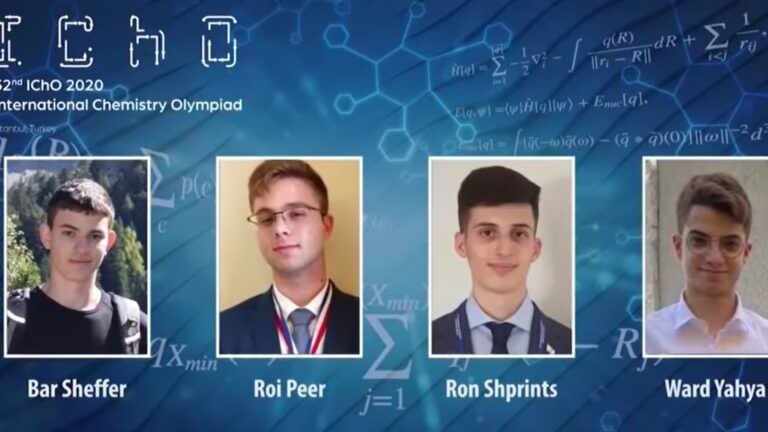 Four Israeli students competed in the 52nd International Chemistry Olympiad and each won a medal – including the first Israeli gold medal in a decade.

The gold medal went to Roi Pe’er from Gan Chaim. His teammates were Ron Shprintz from Ashdod (silver), Bar Sheffer from Ein Vered (silver) and Ward Yahya from Taibe (bronze).

The competition involving students from 80 countries was to have taken place at Istanbul Technical University but moved online because of the coronavirus pandemic.

The International Chemistry Olympiad, founded in 1968, is an annual competition for the world’s most talented chemistry students at the secondary school level. Israel has participated since 2006 and also sends teams to Olympiads in physics, math and computer science.

The Israeli team was trained at the Future Scientists Center for the Advancement of the Talented and Gifted, established by the Maimonides Fund.

“I congratulate the students of Israel’s chemistry team, who brought great honor and great pride to the State of Israel,” said Eli Fried, director general of the Future Scientists Center.

“Even in these challenging days, in Israel as in the rest of the world, the students of the team and the professional team persevered in training, with great investment and determination to succeed, excel and achieve.”

Israel celebrated another online international achievement later in the week when its national student team won the International Mathematics Competition for University Students, a global competition involving 546 students from 96 universities. Six students from Tel Aviv University and one from Bar-Ilan comprised the team.