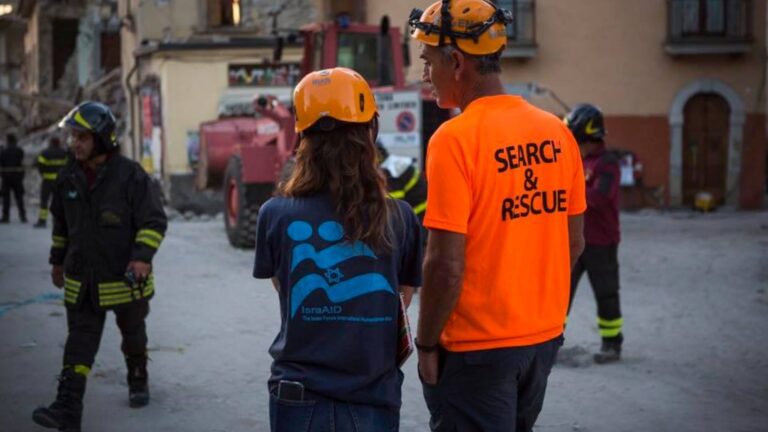 Messages of “grazie” are pouring into IsraAID’s Facebook page as the Israeli nonprofit humanitarian organization sent a 20-member delegation including a search-and-rescue squad, relief workers and trauma specialists to Italy on the night of August 25.

Clad in blue and orange, the IsraAID team currently is the only foreign group of its kind helping Italian counterparts on the ground in the wake of a 6.2 magnitude earthquake that caused massive death and destruction in central Italy on August 24.

“IsraAID was able to send the team thanks to the support of The Ted Arison Family Foundation,” reported founding director Shachar Zahavi.

The death and casualty toll keeps rising as more bodies and survivors are found among the rubble from what is described as Italy’s worst earthquake in seven years. In the town of Amatrice alone, 230 residents and tourists have lost their lives.

Throughout the affected region, including Rome, the count now stands at 290 dead; the youngest victim was five months old and the oldest was 93. Some 400 people are reported injured.

Italy’s Civil Protection Agency said 2,500 people are sheltered in displaced-persons camps after their homes were destroyed.

The Israelis have been building temporary shelter camps, distributing food and non-food items, and providing counseling to grieving families as well as to Italian rescue teams suffering from burnout and acute stress.

IsraAID’s Mickey Noam Alon reports: “While working in the temporary shelter of Scai, we met Gabriele Gabiza, an 82 years old man who lives alone in a traditional house that’s over a 150 years old.

“Gabiza was asleep at home when the quake hit leaving part of his house completely collapsed and walls filled with cracks. Like hundreds of others, Gabiza was left stranded in the middle of the night, without shelter or a safe roof over his head.

“After hours of wondering through what remained of the streets, Gabiza headed to one of the community shelters that was erected within 24 hours of the quake.

When I met him, he was clearly exhausted, shocked and confused. He was straddling slowly with his walking stick unsure of where to go.

Immediately an IsraAID team member helped him to find a place to sit, offered him a warm blanket and some water.”

Israel’s prime minister, president and Foreign Ministry all sent messages of condolence and offers of assistance to the Italian government.