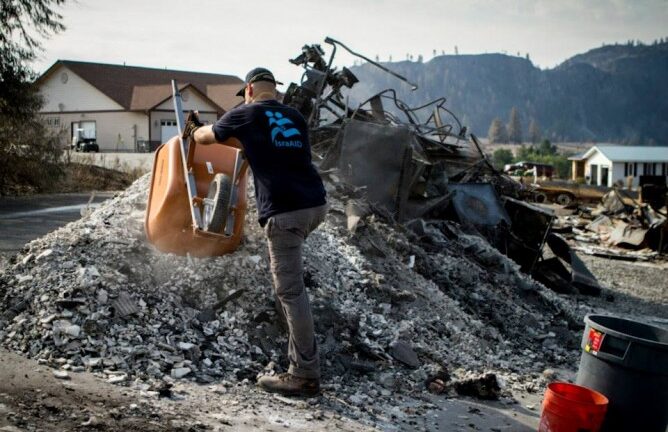 IsraAID sifting through rubble in Pateros. 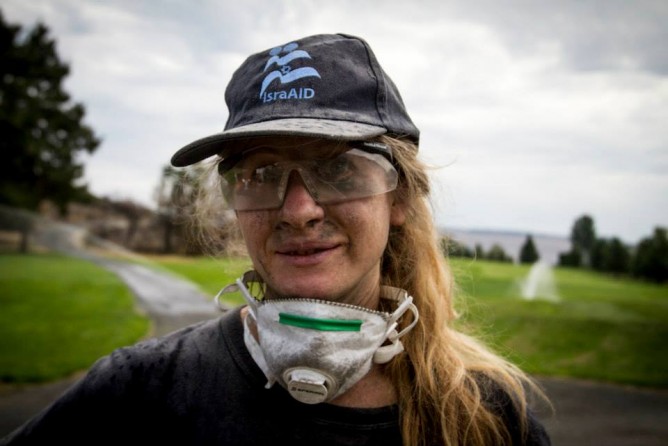 An IsraAID volunteer in Washington State.

War at home did not stop the Israel-based humanitarian relief agency IsraAID from sending experienced volunteers to help in the wake of a disastrous wildfire on the West Coast of the United States.

“Our team is working hard alongside residents who lost their homes in Pateros, [Washington State], USA,” reported IsraAID Founding Director Shachar Zahavi. “The local community is amazing and receiving us with open arms.”

Upon arrival following what has been dubbed the Carlton Complex — the worst fire in Washington State’s history, destroying some 300 homes — IsraAID joined forces with Team Rubicon to help residents remove debris from the ruins of their homes and sift through the ash to recover personal items. They’ll also help in rehab efforts.

Sparked by lightning on July 14, Carlton Complex burned for more than 10 days through nearly 400 square miles of Methow Valley, about 180 miles northeast of Seattle. President Obama issued a state of emergency in Washington. 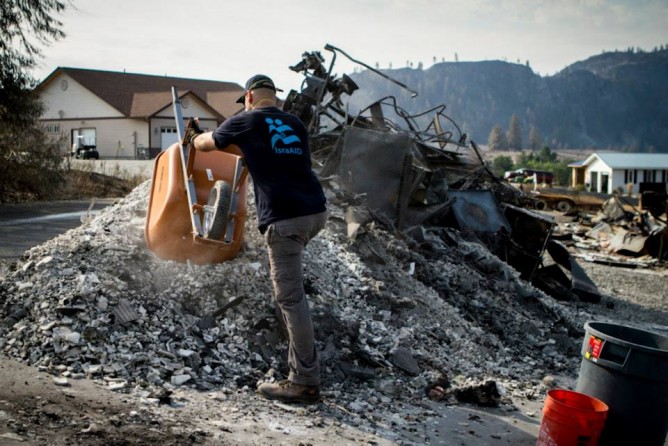 IsraAID sifting through rubble in Pateros.

Since its founding 10 years ago, IsraAID has responded to crises in 22 countries, reached more than one million people in distress and distributed some 1,000 tons of relief and medical supplies. The 750-strong staff of Israeli volunteers and professionals (among them 156 doctors and nurses and 100 therapists and social workers) has trained more than 5,000 professionals in the served countries as well.

Earlier in July, despite Israel’s Operation Protective Edge in Gaza, on the Day of the African Child graduates of IsraAID’s psychosocial arts-based facilitation training program at the Kakuma Refugee Camp in Kenya led an expressive arts activity for hundreds of children. And at the end of the month, IsraAID led its third workshop on expressive art therapy for community agents of a Haitian NGO helping survivors of gender-based violence.