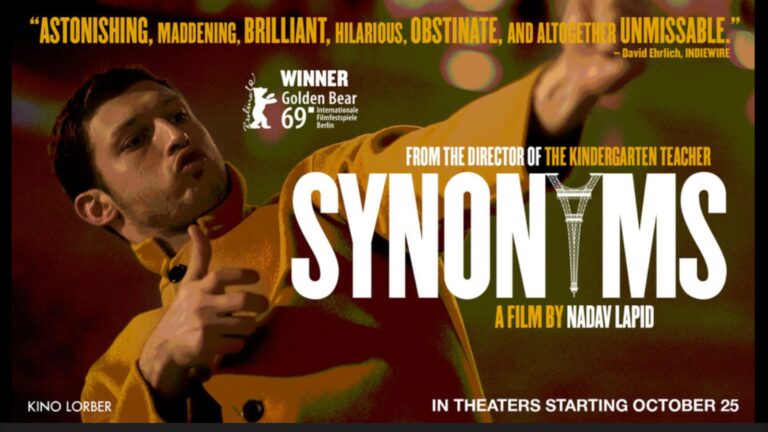 A French film with an Israeli director, Israeli screenwriters, Israeli cinematographer and Israeli lead actor was named by a group of 42 Iranian film critics as one of the top films of 2019.

No, this is not fake news.

In response to a poll conducted by online film magazine Cine Eye, the critics chose “Synonyms,” directed by Nadav Lapid, as one of the year’s best along with such movies as Quentin Tarantino’s “Once Upon a Time in Hollywood.” (Incidentally, Tarantino has a residence in Tel Aviv with his Israeli wife, Daniella Pick.)

“Synonyms” won the Golden Bear Award at the 2019 Berlin Film Festival and was chosen by New York Times critics as one of the best films of 2019. “Synonyms” also was picked as one of the year’s best by readers of French film magazine Cahiers du Cinema.

Lapid co-wrote the screenplay with his father, Haim Lapid. Cinematography is by Shai Goldman. About 10 Israeli actors appear in the film, and several crew members are Israeli too.

“When I decided to try to direct films 20 years ago in Paris, Iranian cinema was perhaps the most complex and fascinating in the world, and Iranian films at the time shaped my cinematic thought,” Lapid told Haaretz after learning about the honor that his film earned from the Iranian critics.