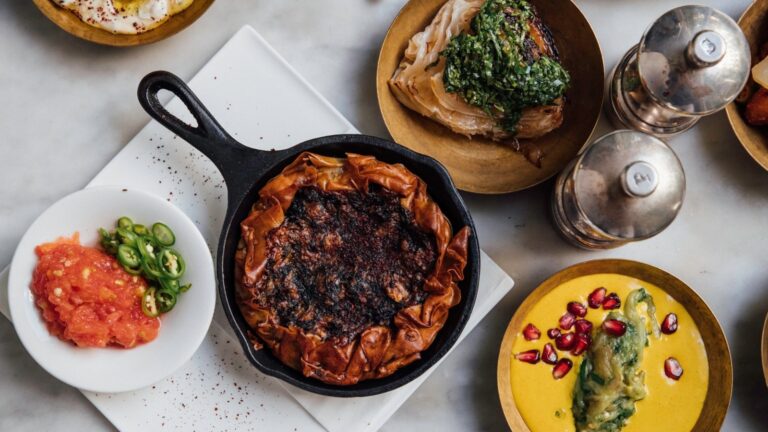 Photo courtesy of Alena Restaurant at The Norman, Tel Aviv.

It’s been a long time since the culinary output of Israel was known mostly for hummus and Jaffa oranges. These days, Israeli restaurants have received accolades as some of the most exclusive in the world.

Gault & Millau recently published a list of the 147 best restaurants in Israel along with another 57 “recommended” street eateries. To make it onto the list, a restaurant had to receive a grade of at least 10 out of 20 points.

Topping the list were Alena in The Norman Hotel in Tel Aviv, and Jerusalem’s La Regence in the King David Hotel. Both received 16 points. (Alena is not kosher; La Regence is.)

Coming in next, with 15 points each, were Chef Meir Adoni’s Blue Sky in the Carlton Hotel in Tel Aviv (kosher), Dinings at the Norman Hotel (not kosher) and Tel Aviv’s open-kitchen restaurant OCD (not kosher).

Gault & Millau named Tomer Gal of the George & John restaurant in the Drisco Hotel in Tel Aviv (not kosher) as “the most promising chef.” The best pastry chef award went to Shahar Peleg from the Yaffo Tel Aviv restaurant.

Tel Aviv has been dubbed the “vegan capital of the world” and Gault & Millau recognized the Tel Aviv restaurant Opa in the top spot for the vegan-vegetarian category (with 14.5 points).

Igra Rama won “best local cuisine,” the best wine menu went to HaBasta and the best food bar is Kab Kem – all in Tel Aviv and all non-kosher.

Jerusalem scored a win for “best atmosphere” with the Yudale Bar, part of the city’s popular Machneyuda Group.

Haifa had a winner in Shawarma Emil for “best street food” and the Michael Local Bistro in Moshav Liman in northern Israel, also came in high on the list, with 14.5 points (not kosher).

Gault & Millau honored another 204 restaurants as “popular” (but without receiving a grade).

Israel foodies have had several reasons to rejoice of late. The World’s 50 Best Discovery website includes seven Tel Aviv hotspots and one in Jerusalem on its latest list. The latter went to the Machneyuda restaurant in the capital’s Machane Yehuda market. The Tel Aviv bunch included HaBasta (also on Gault & Millau’s list), The Bellboy and Butler bars, Pastel in the Tel Aviv Museum complex and Milgo & Milbar, which was lauded for its “hip fish dishes.”

Too many choices? Why not start your own list and eat your way through the best Israel has to offer.