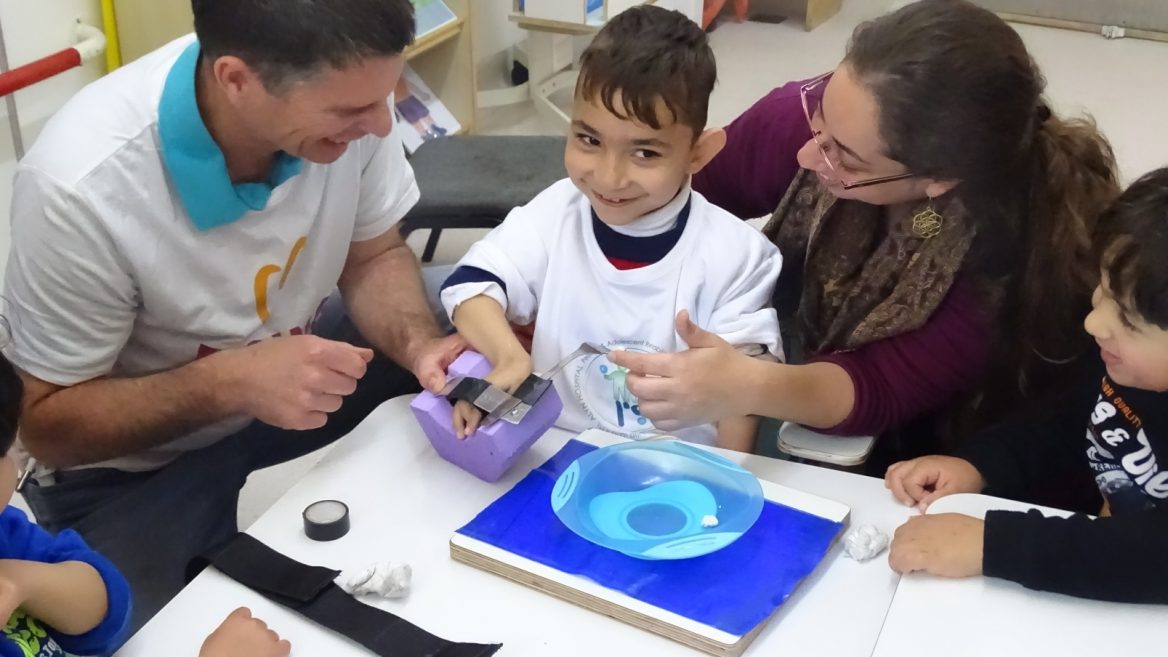 ALYN staffers introduce Yusuf to a gadget that will allow him to feed himself. Photo: courtesy

Yosef cannot hold a fork or spoon. The little boy was dependent on others to feed him until an assistive device was fashioned for him at ALYN Hospital, a nonprofit pediatric and adolescent rehabilitation facility in Jerusalem.

While inventive solutions for ALYN patients like Yosef have been created in the onsite biomechanical lab for the past 25 years, now the one-of-a-kind hospital is incorporating the lab into a unique state-of-the-art innovation center.

The center encompasses two tracks: PELE (a Hebrew acronym for Solutions for Children of ALYN), which designs case-specific solutions for special-needs children; and ALYNnovation, where entrepreneurs will develop and work with corporate partners to commercialize mass-market assistive products to enhance independence and quality of life for children with special needs everywhere.

Set to open officially in September in a former storage area of the hospital, the 500-square-meter center is built for inspiration, featuring a glass wall facing the Jerusalem Forest.

On the practical side, the center provides a single address for product design and prototyping with input from ALYN clinicians, as well as in-house product testing with the target audience.

“The fact that it’s under one roof provides added value to the entrepreneurs,” says Danna Hochstein Mann, director of ALYNnovation. “They can make a prototype using our 3D printers, interact with the children in real time to test the prototype, and go back to the lab and tweak it. It’s much cheaper to do this process in the prototype stage.” 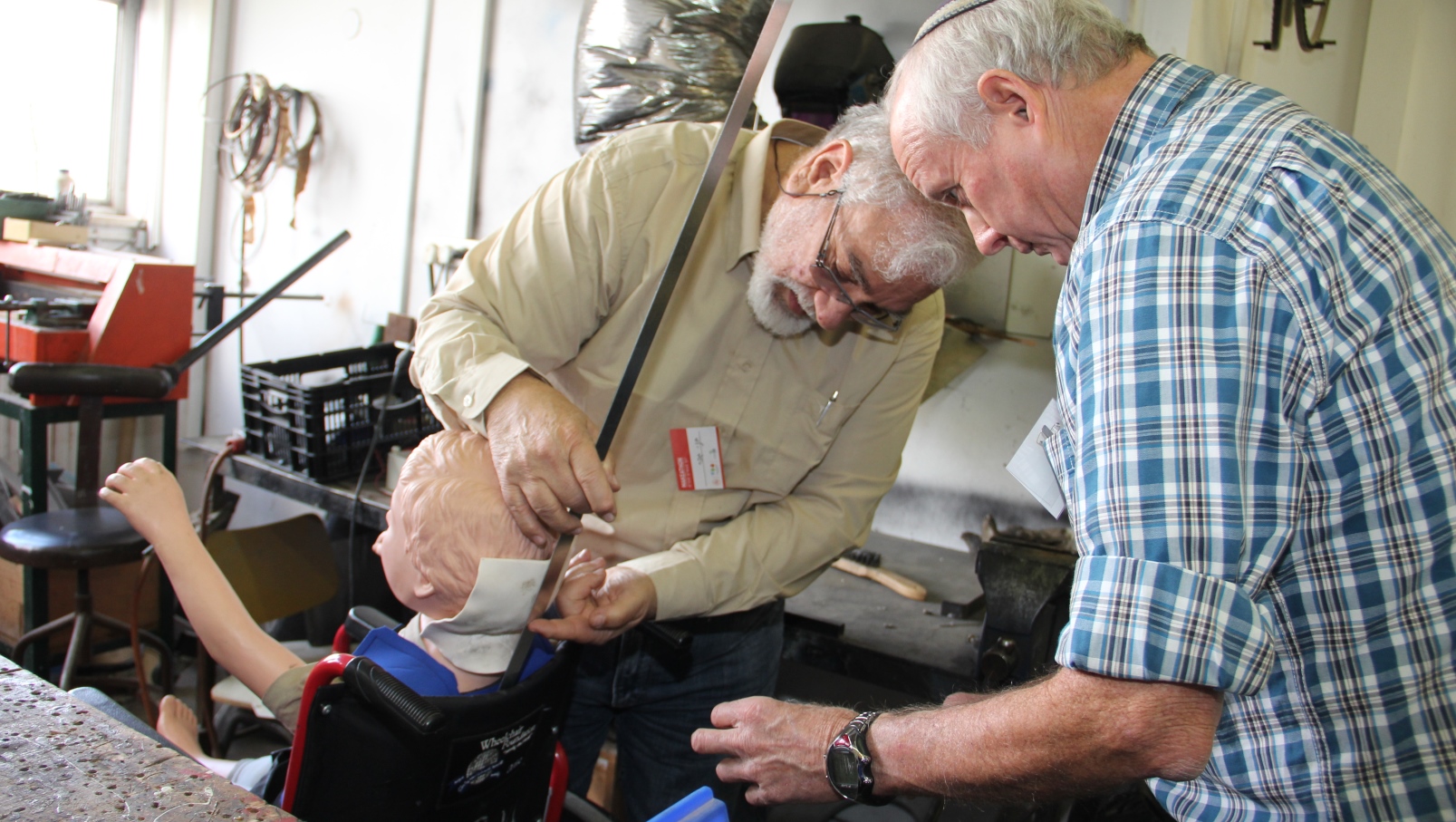 Mann joined ALYN at the beginning of 2017 after a 12-year career in venture capital in the capital city.

“I think Jerusalem is the right place for a center of this kind, with its combination of a fast-growing entrepreneurial ecosystem, its focus on health and medical innovation and its social awareness,” Mann tells ISRAEL21c.

She points out that on Good Deeds Day in March, ALYN hosted one of two Jerusalem makeathon events focused on assistive technology. The hospital also held a makeathon last year. 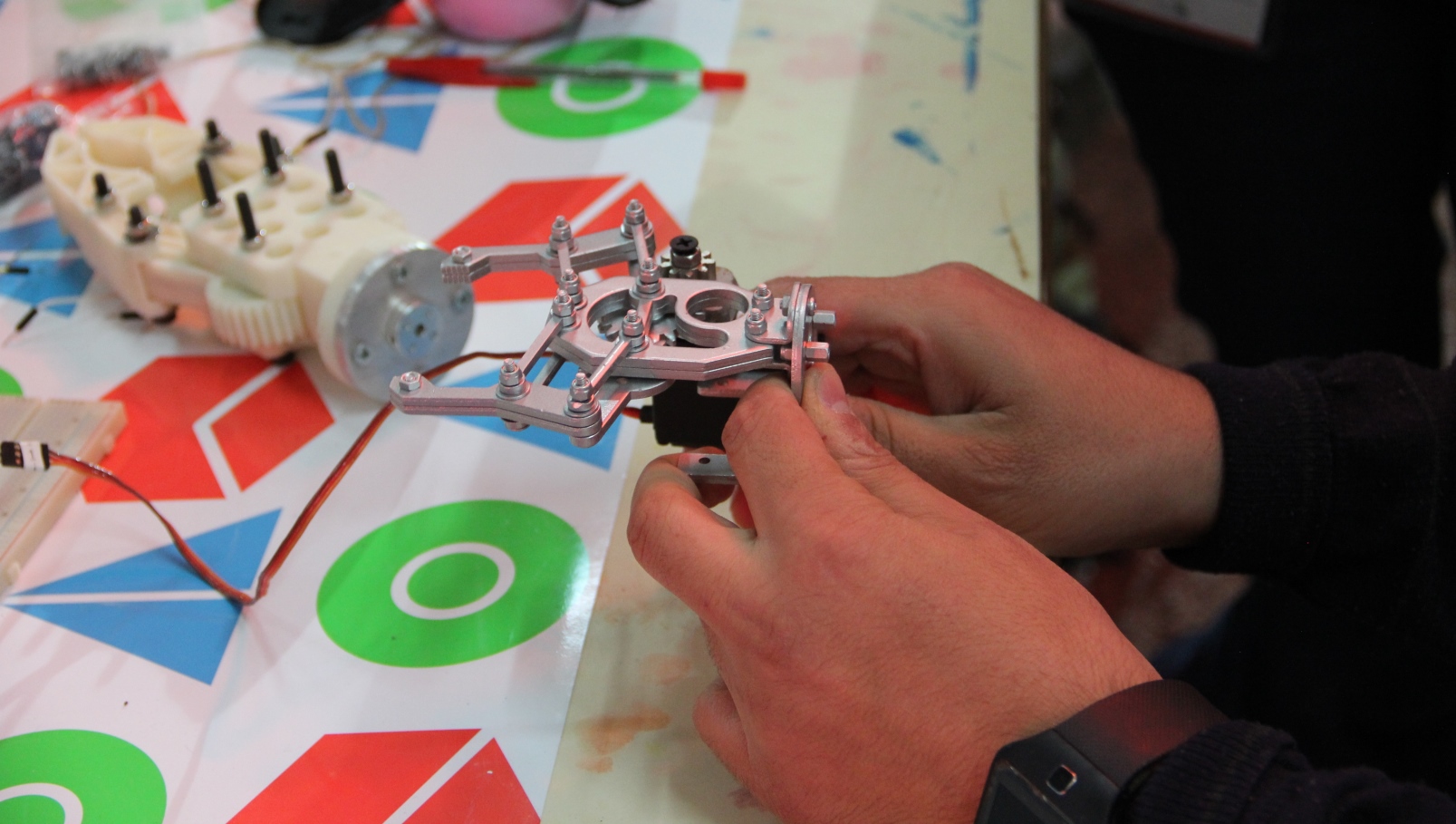 Mann also chaired the board of PresenTense, which operates the A3i assistive-technologies accelerator in partnership with Beit Issie Shapiro of Ra’anana, the Ruderman Family Foundation and the Jewish Federation of Greater Los Angeles.

ALYNnovation is meant to pool Israeli expertise toward identifying and creating assistive inventions relevant to children, and get them commercialized through industrial partners.

“Everyone fits a different part of the model,” Mann says.

“Maybe in situations where a TOM solution can work for a bigger audience we could take it on,” says Mann. “That’s where the institutionalization comes into play.” 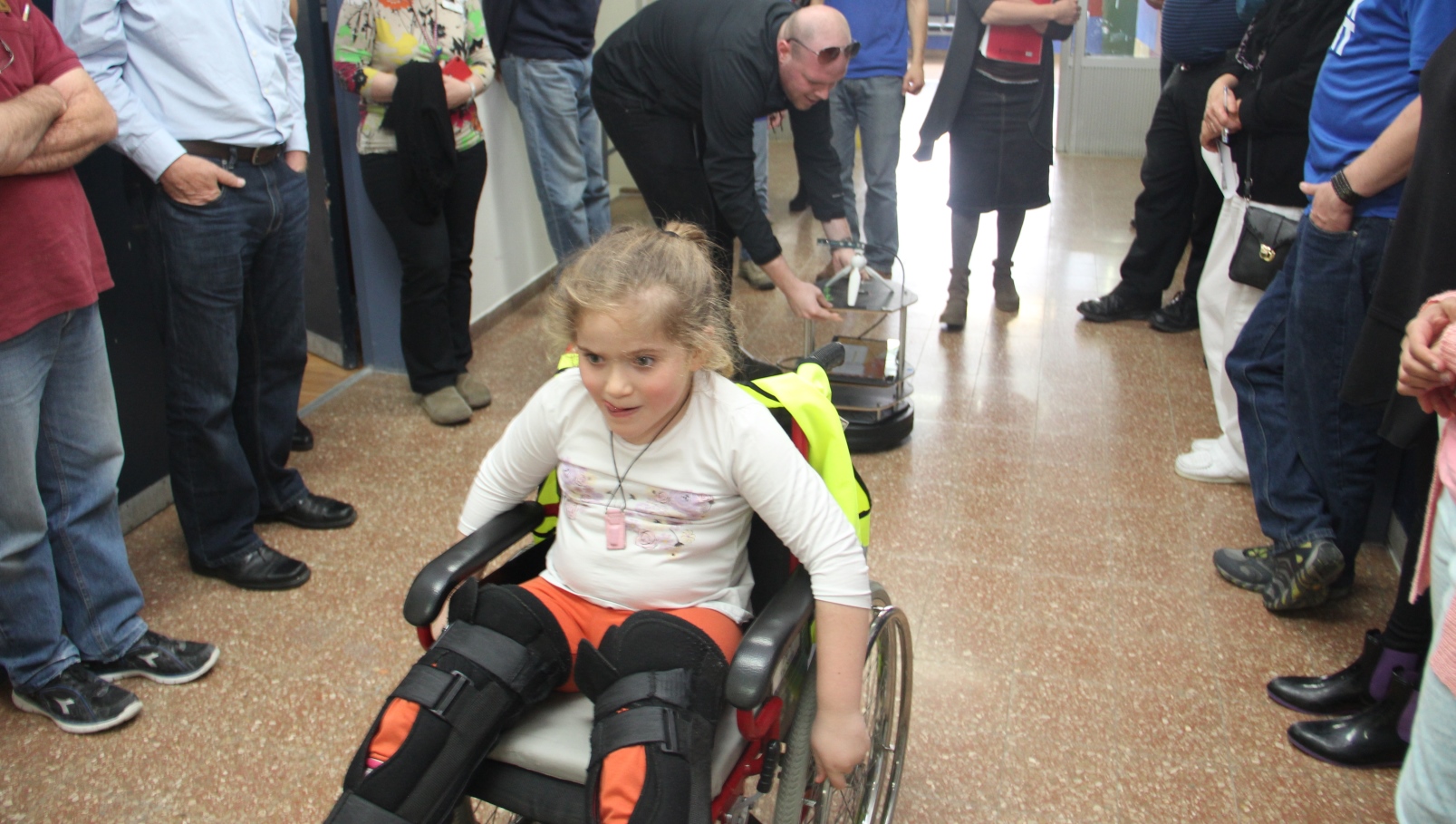 This robotic helper carries items as it follows a child in a wheelchair. Photo courtesy of ALYN

The National Insurance Institute and the Cross-Lab Network (XLN) 3D printing project of the Tel Aviv-based Reut Institute are also supporting the endeavors of the new innovation center. 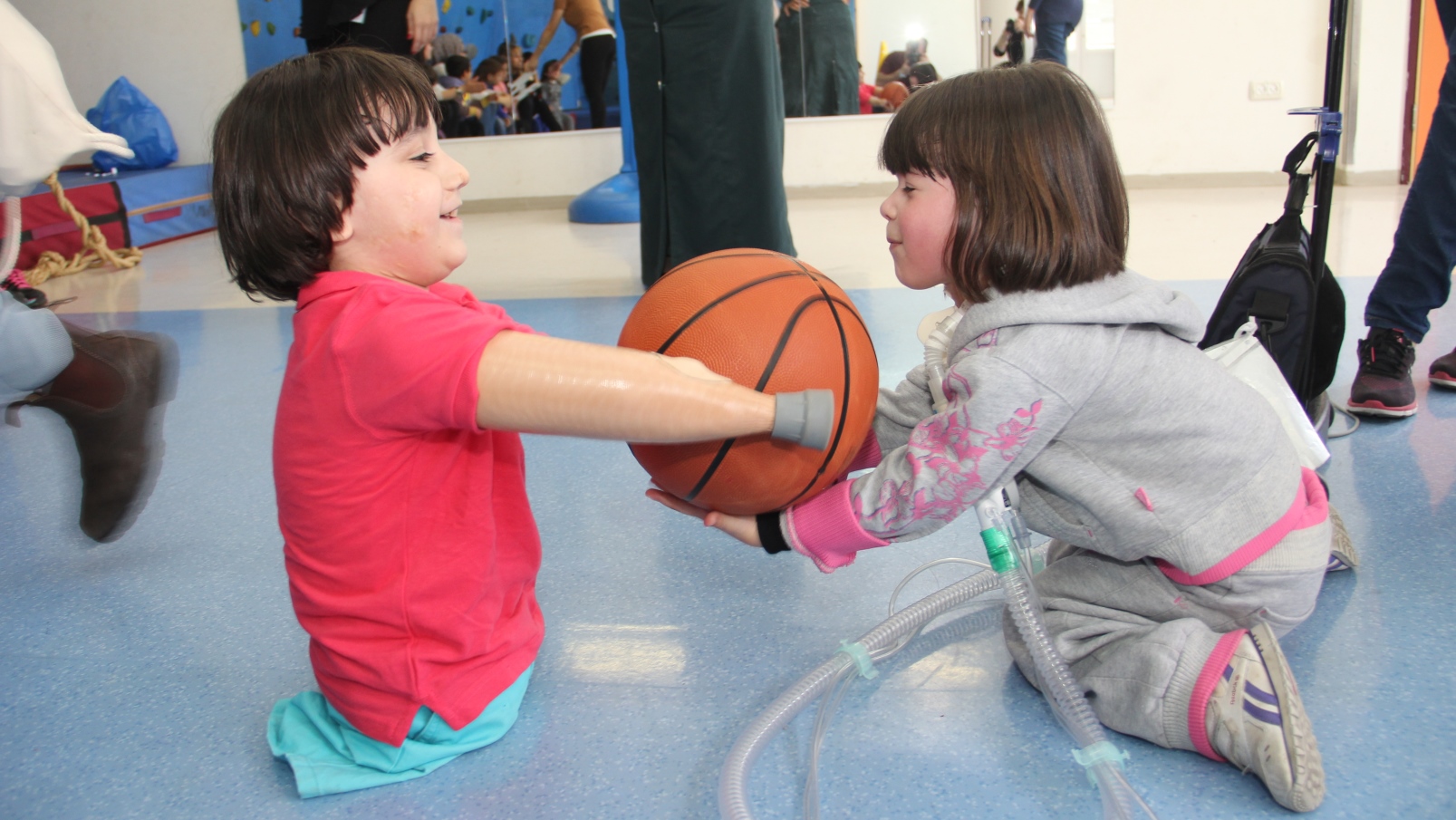 A boy who lost his limbs to predatory bacteria playing with another child at ALYN with the help of assistive gear. Photo courtesy of ALYN

“We already have a biomechanical lab here, but we decided to make an opportunity for children not only in Jerusalem but perhaps all over the world to benefit from our tailor-made solutions,” says PELE Director Hilla Boral, an occupational therapist and inventor of items such as the WeBe Baby Nest for newborns.

In coordination with ALYN’s biomechanical lab director Ohad Gaal-Dor and “an army of volunteers,” PELE was formed two years ago to more efficiently meet patient needs that can’t be solved with an off-the-shelf product – either because one doesn’t exist or because the product is too expensive.

Boral cites the example of a device that fulfilled the wish of a 13-year-old ALYN patient to wrap tefillin on his arm and head for morning prayers, in accordance with Jewish tradition, though his hands were too weak from cancer treatments to do this unaided.

Now, PELE will have a dedicated physical space and benefit from cross-pollination of ideas from ALYNnovation.

The innovation center has received about $1.7 million from the National Insurance Institute, the Jerusalem Development Authority and private contributors. An additional $2 million is being raised to assure enough funding for the first five years.

UNCOVER ISRAEL - Get the ISRAEL21c
Weekly Edition free by email
Sign Up Now!
Bring Israel's story to life.
Millions of people around the world rely on us to gain a deeper understanding of Israel. We are the trusted source for original content you won't find anywhere else.
You can make a difference. Donate today to support journalism that brings Israel’s story alive.
SUPPORT ISRAEL21c
Read more on:   Social Action, Alyn, Innovation, Disability