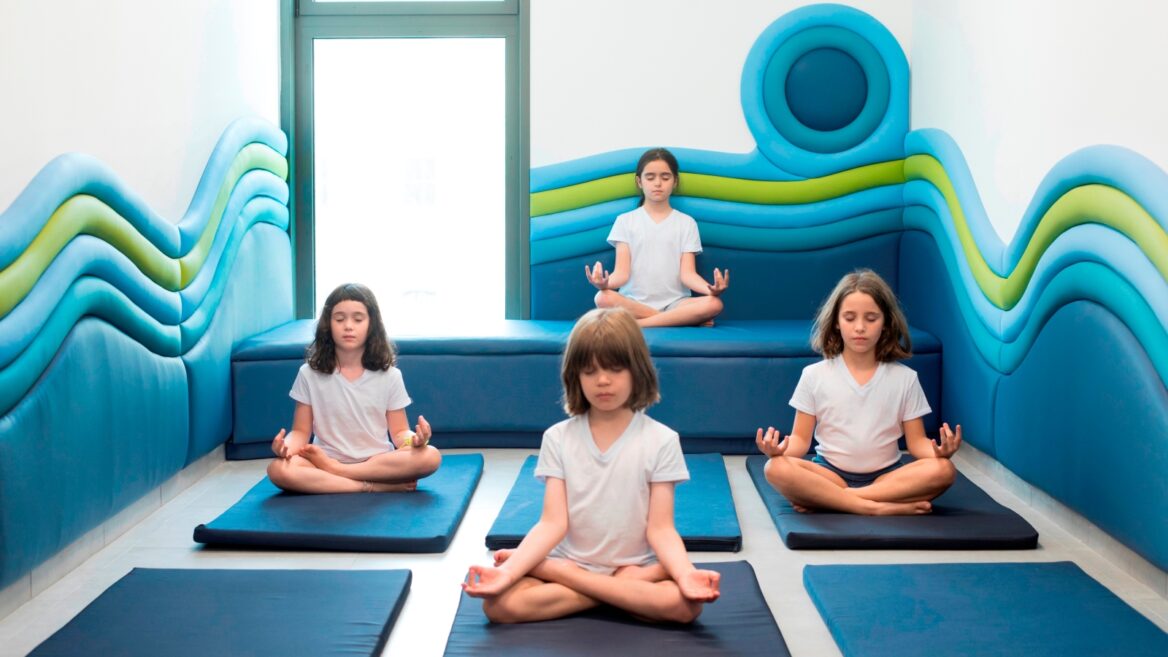 Hay breathed life into those words at Bikurim, the first inclusive school in Tel Aviv. In this new model elementary school, one-quarter of the pupils have physical disabilities or are on the autistic spectrum.

The municipality and the Inclu Foundation commissioned Hay to design a flexible pluralistic learning environment. It had to be comfortable for the children with special needs while encouraging creativity, collaboration and interaction among everyone. 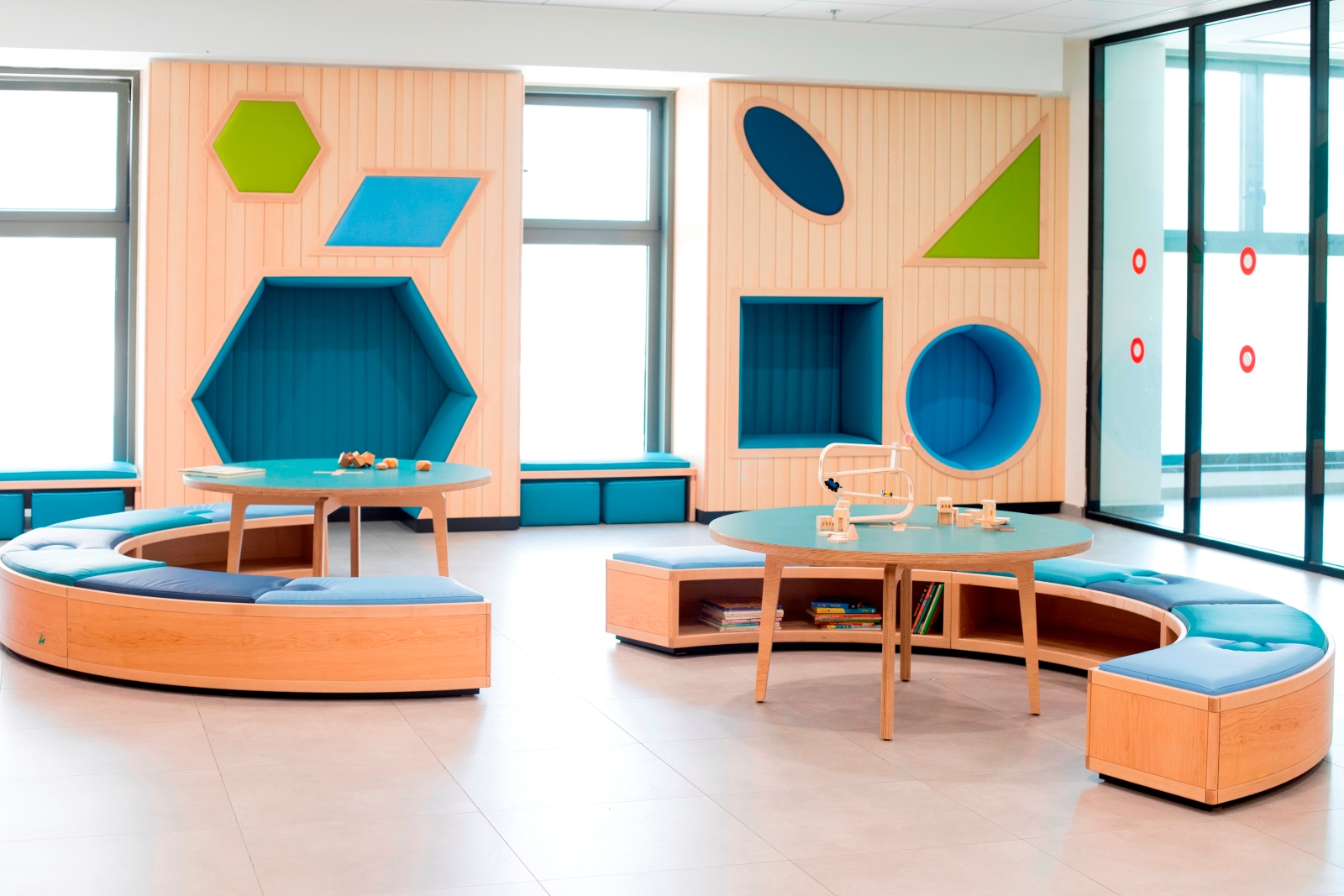 An interior space in the Bikurim inclusive school, designed by Sarit Shani Hay and built by Tsionov Vitkon Architects. Photo by Roni Cnaani

Her work at Bikurim won the 2020 social design award from Frame, an Amsterdam-based design and architecture media company. Within a week, Hay’s accomplishment was reported in places such as India, Dubai and New York.

“It’s a project with a lot of value to society,” Hay tells ISRAEL21c.

“The idea of inclusion in education has existed almost 50 years but that doesn’t mean it’s well organized in terms of design. This is a way to make design for change from our small country. I think it will make a lot of noise.”

In 2018, she won an A’ Design Award – the world’s largest design competition – for her preschool complex in Tel Aviv incorporating themes of vegetables, fruits, market stalls, crates and delivery trucks inspired by the history of the site as a former produce market. This was also named a favorite by Archilovers social network for architects and designers. 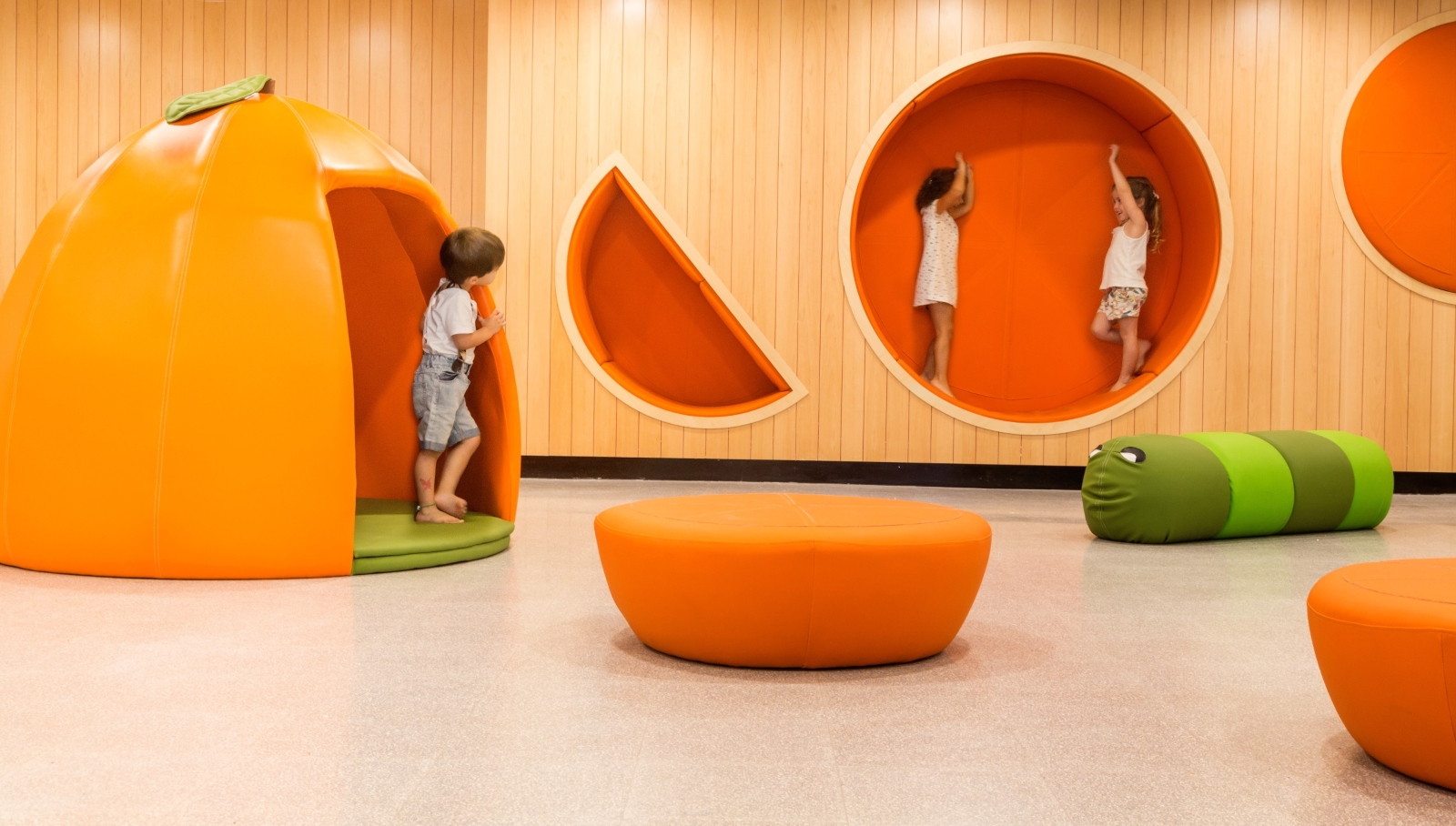 The lobby of a preschool complex in Tel Aviv designed by Sarit Shani Hay incorporates orange motifs in homage to “Path of the Orange Peels” by children’s book writer and illustrator Nahum Gutman. Photo by Dudi Moskovitz

“I’ve been working for almost three decades, the last 11 years in school and preschool environments for many municipalities,” Hay says. “My main expertise is design for children and public spaces.”

Last year, Hay’s studio voluntarily designed a school for children of refugees in Tel Aviv. Archilovers chose it as “Best Project for 2019.” 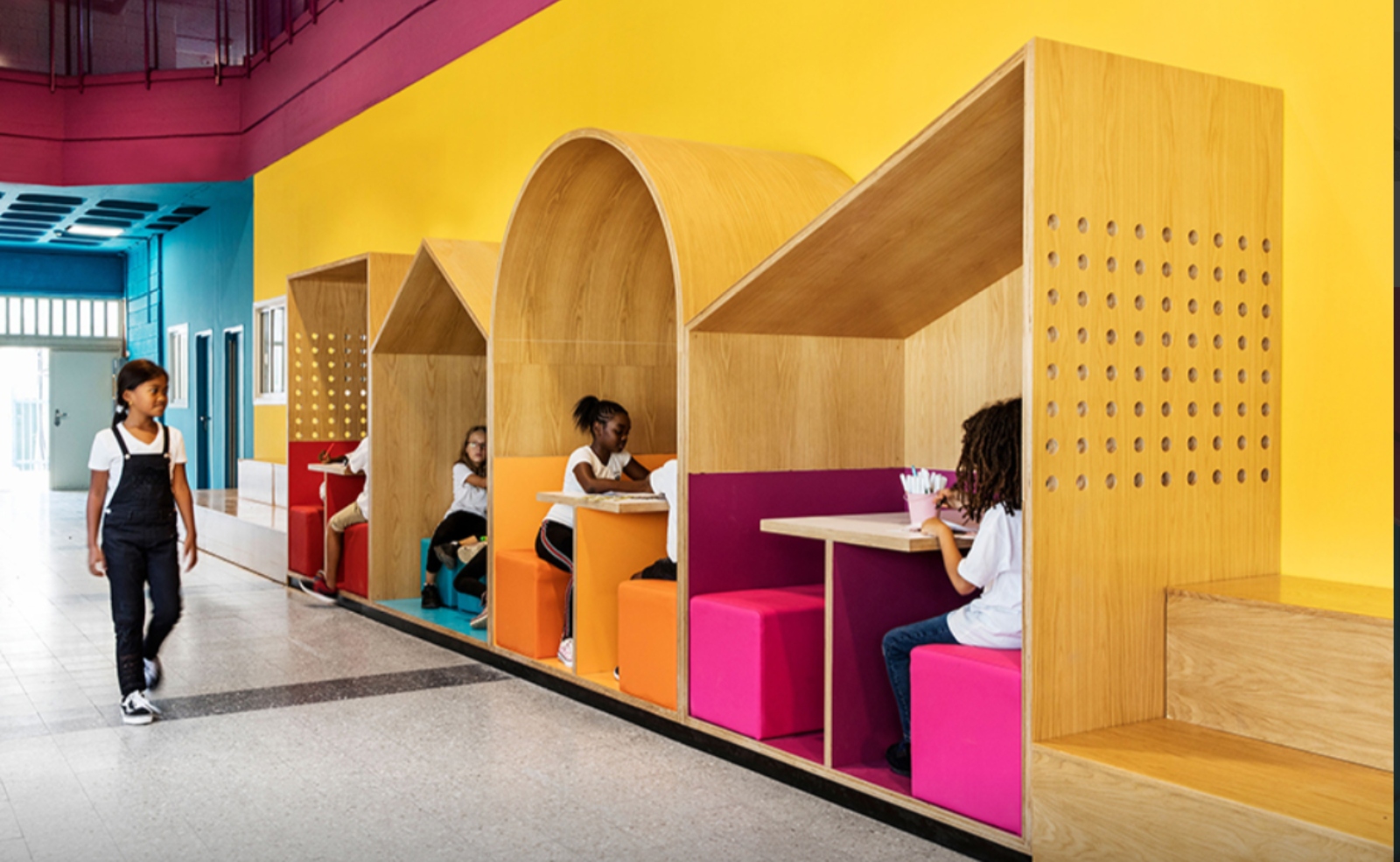 Hay worked with the principal of the Al Razi School in the Israeli Arab village of Tamra to design classrooms that soften the hard transition from kindergarten to first grade. 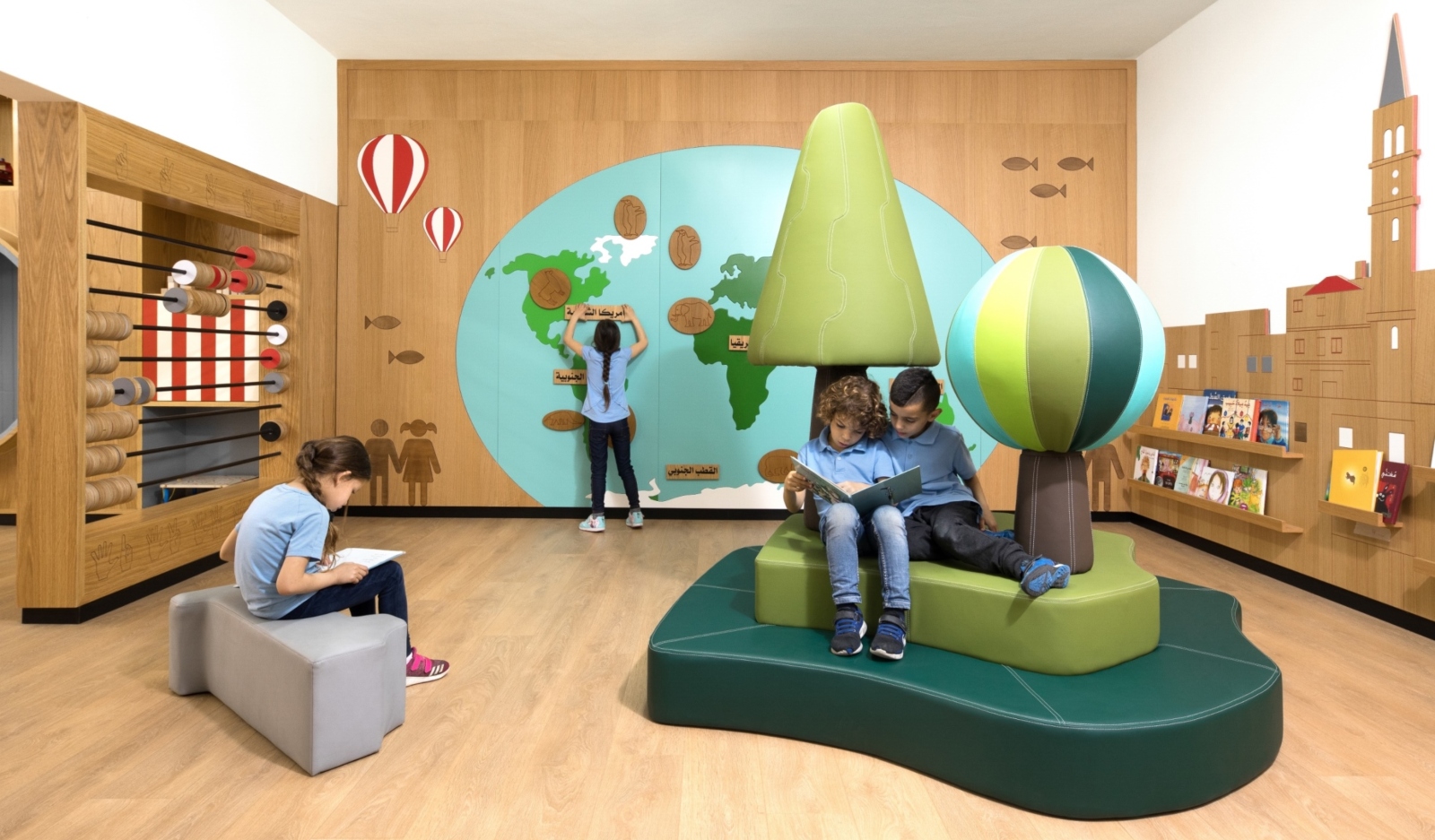 Sarit Shani Ha’s interiors soften the transition from kindergarten to first grade in the Al Razi School in the Israeli Arab village of Tamra. Photo by Tal Nisim

Every piece of furniture is custom made in Israel by craftspeople handpicked to translate Hay’s vision into reality. 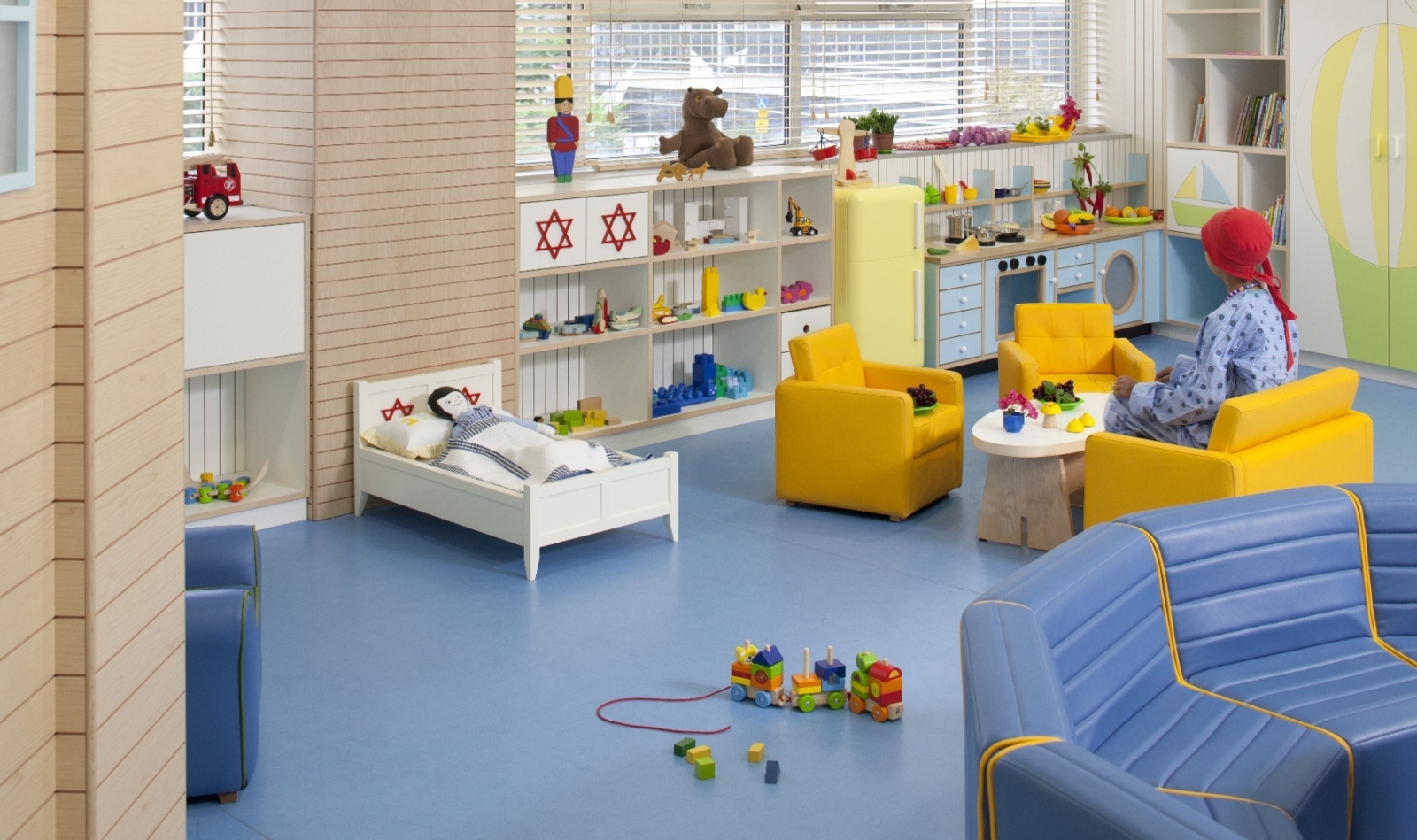 “We put a lot of emphasis on safety, and we always try to work with sustainable materials that will last for many years and are very easy to clean. Wood, for example, is classic and has a lot of warmth.”

Still, Hay had no prior experience designing school structures intended to foster inclusion.

“This was the first time I learned what an inclusive classroom is,” she says. Rather than copy designs she saw on the Internet, she started from scratch.

“I had a lot of conversations with pedagogy experts to understand the philosophy and the needs. I was fascinated by the idea of a design strategy that translates the philosophy into a physical environment.” 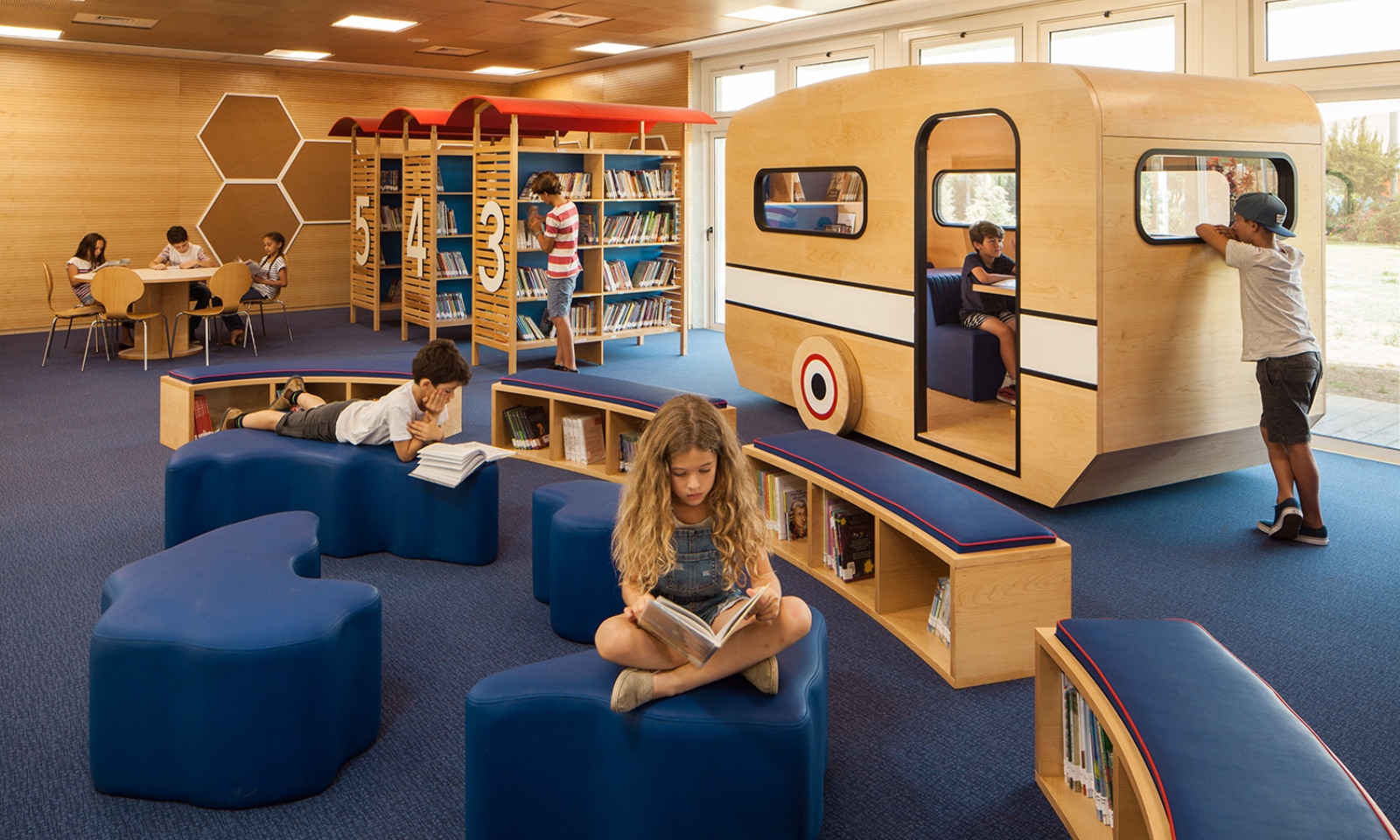 She and her staff played with geometric shapes that could be molded to support group activities for all children regardless of their physical or mental abilities. This flexible furniture, alongside intimate soft nooks, features calming colors and wooden materials to prevent sensory overload.

Tsionov Vitkon Architects put it all together according to Hay’s specifications. 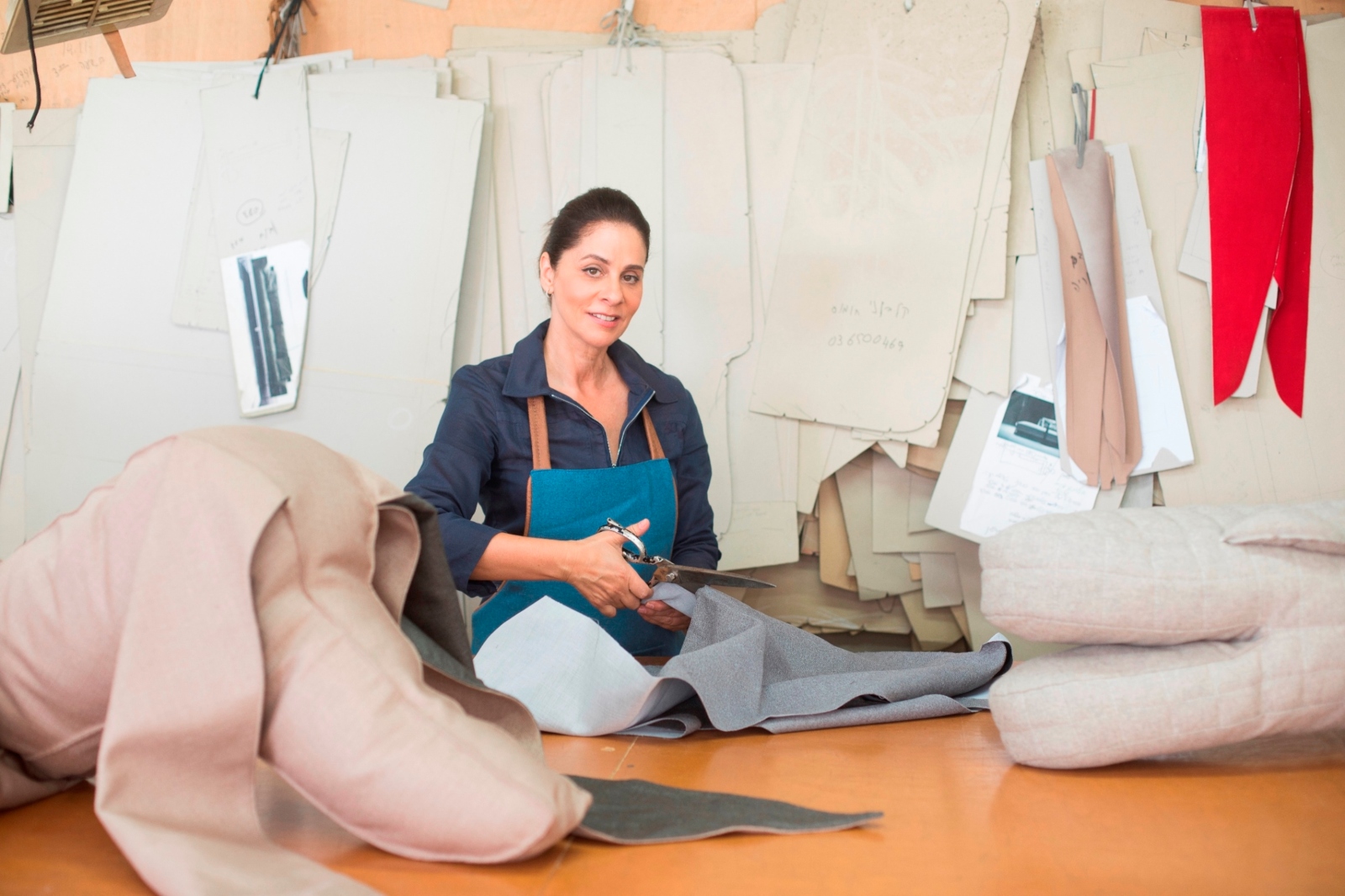 Special attention was given to the public spaces between the classrooms, designed to encourage study through play.

“The concept of a group circle was used to create a circular seating bench split into two halves, allowing for different seating arrangements wherever possible for any child wanting to join the group — for example, a child in a wheelchair,” Hay explains.

“A puzzle shape motif is repeated throughout the design reflecting the uniqueness of each child and how all create a whole when brought together.” 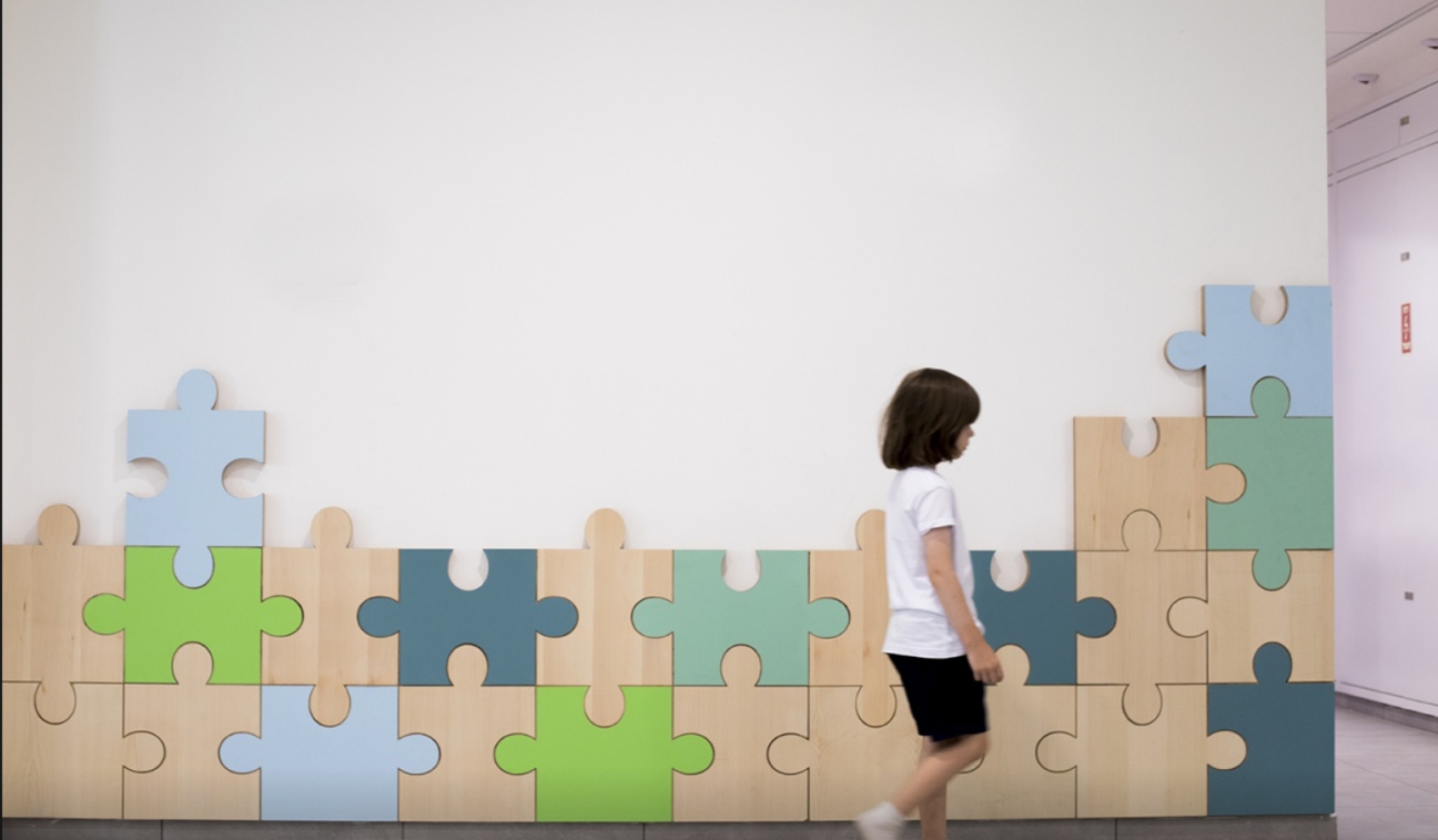 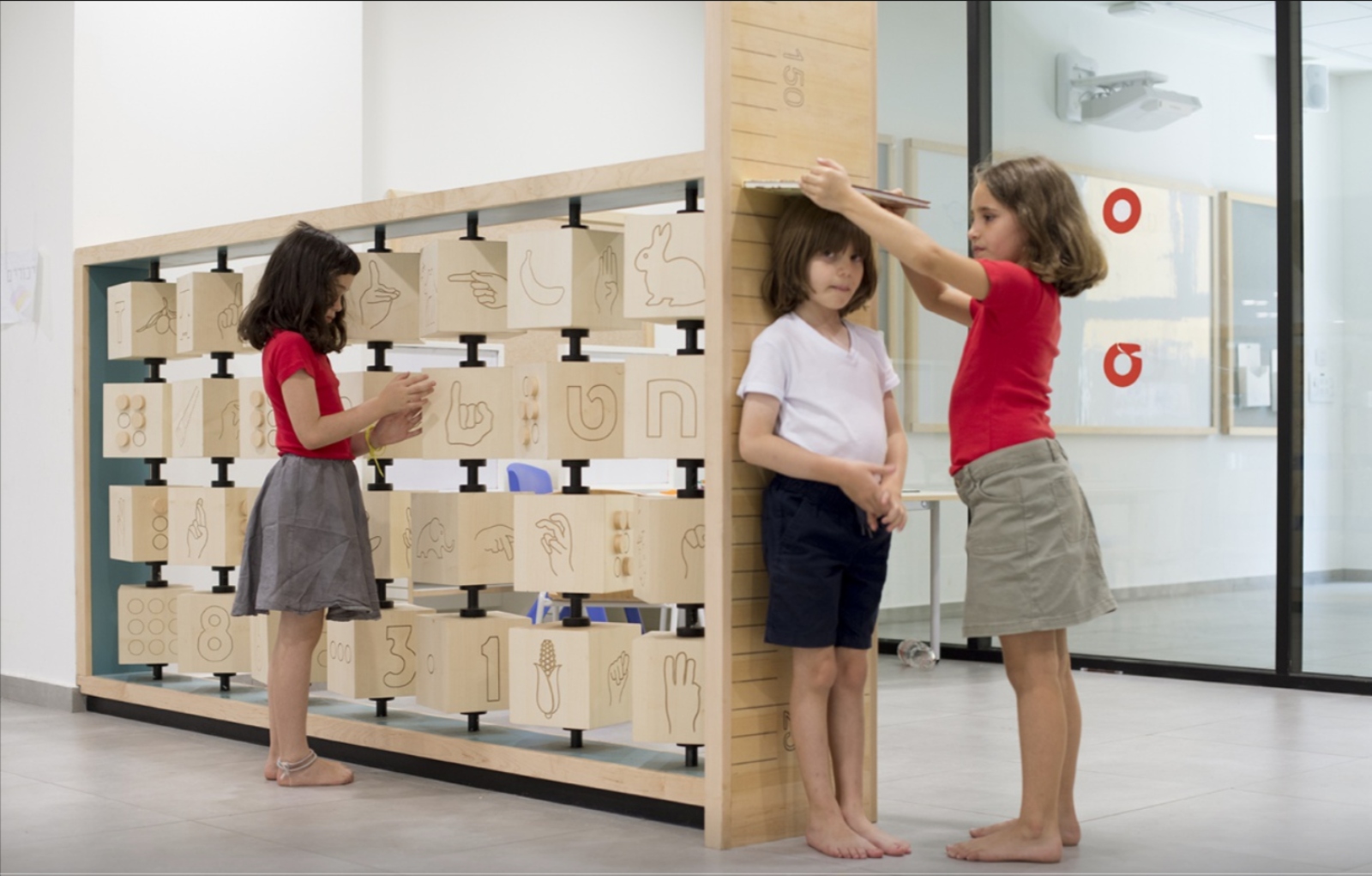 Children learn their letters at the inclusive Bikurim School in Tel Aviv. Photo by Roni Cnaani

The Bikurim school so far consists of 2,000 square meters (21,528 square feet) encompassing six glass-walled first- and second-grade classrooms as well as areas designated for physical therapy, yoga or meditation, and individual study. It’s expected that the school will grow steadily as another grade is added every year.

“It’s a prototype for another four or five schools planned like this in Israel,” Hay says. 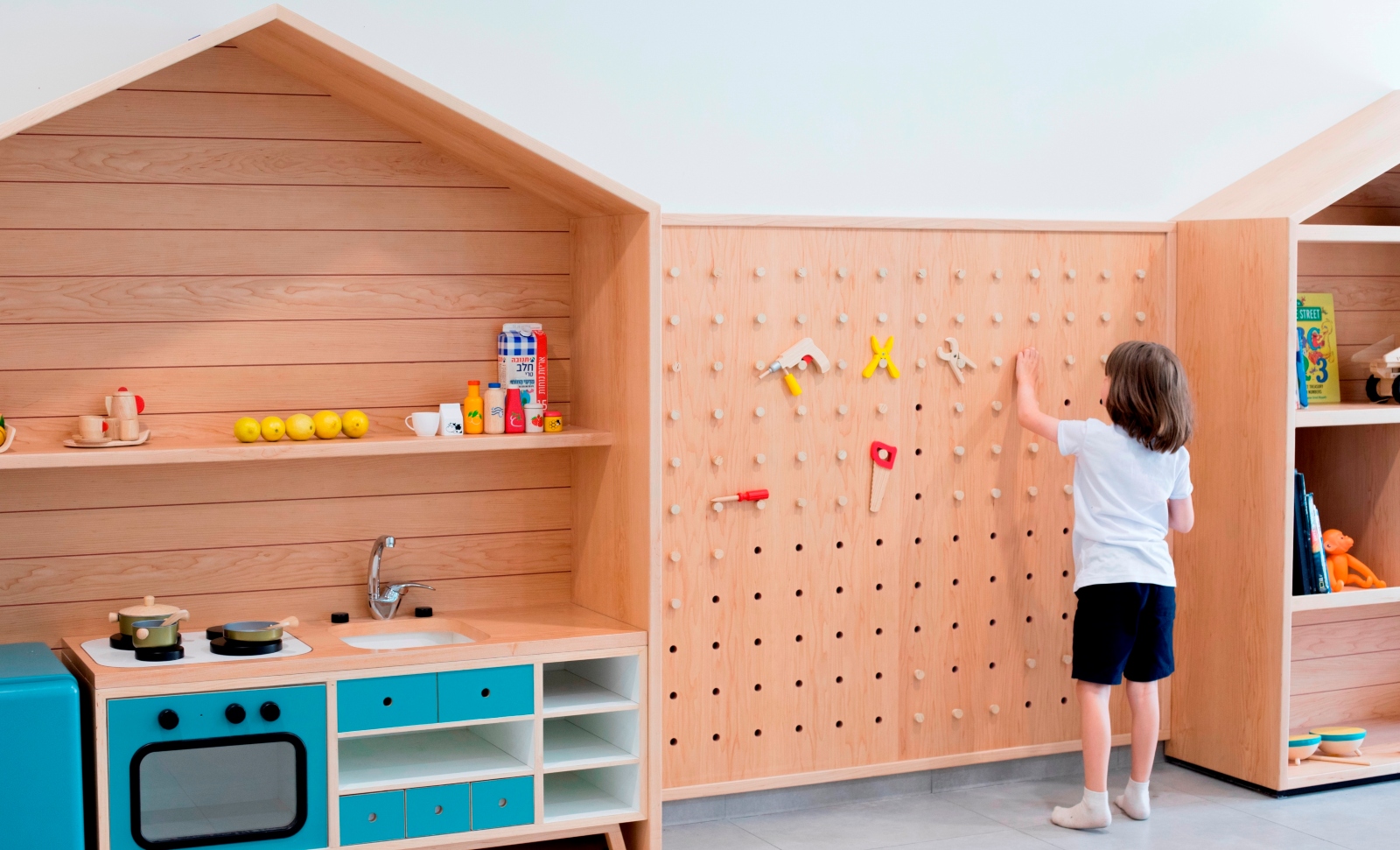 The play kitchen and shop designed by Sarit Shani Hay for the inclusive Bikurim School in Tel Aviv. Photo by Roni Cnaani

Lectures in the US

After spending several years in New York, London, and Africa, and receiving a post-graduate diploma from London’s Chelsea College of Art & Design, Hay returned to her native Israel in 1995. 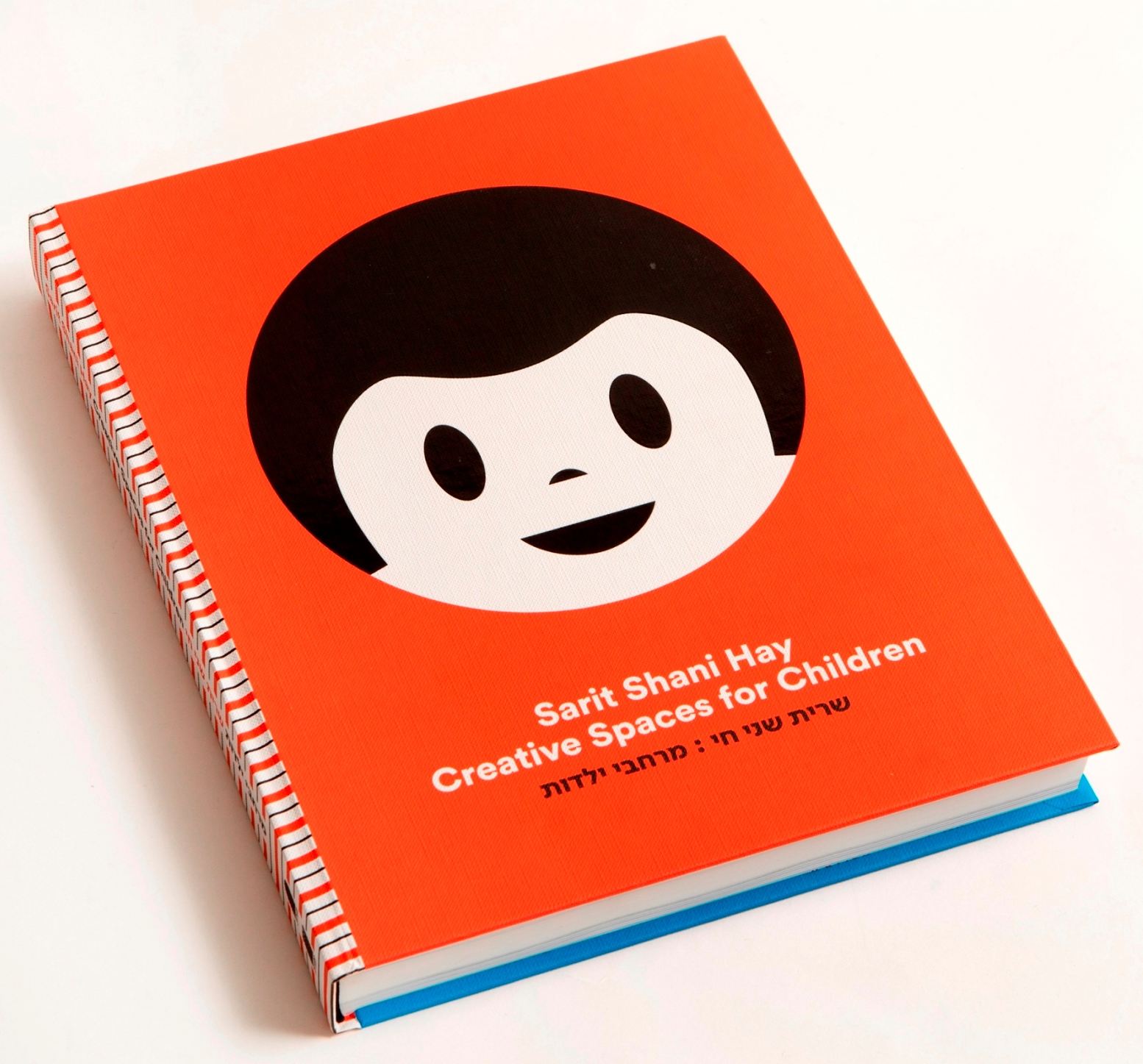 She says that the birth of her first child led her to discover her professional and creative calling designing stimulating and playful spaces for children.

Hay’s work is well known outside of Israel.

“Last year I was invited by the Jewish Agency to do three talks around America about pedagogical design,” she tells ISRAEL21c.

She also gave a public lecture in Jerusalem, “Thinking Out of the Box,” with Lior Ben-Shitrit, (lbsarchitects.com) the Israeli architect/urban planner who designed the unique “Yes I Can!” ADHD classroom at Darca High School in Kiryat Malachi.

Ben-Shitrit recently designed an experimental space for younger kids with ADHD, including a chair with a special movement mechanism.

With creative minds such as Hay and Ben-Shitrit, Israel is leading the way toward a new age of classroom design where no child is left behind.