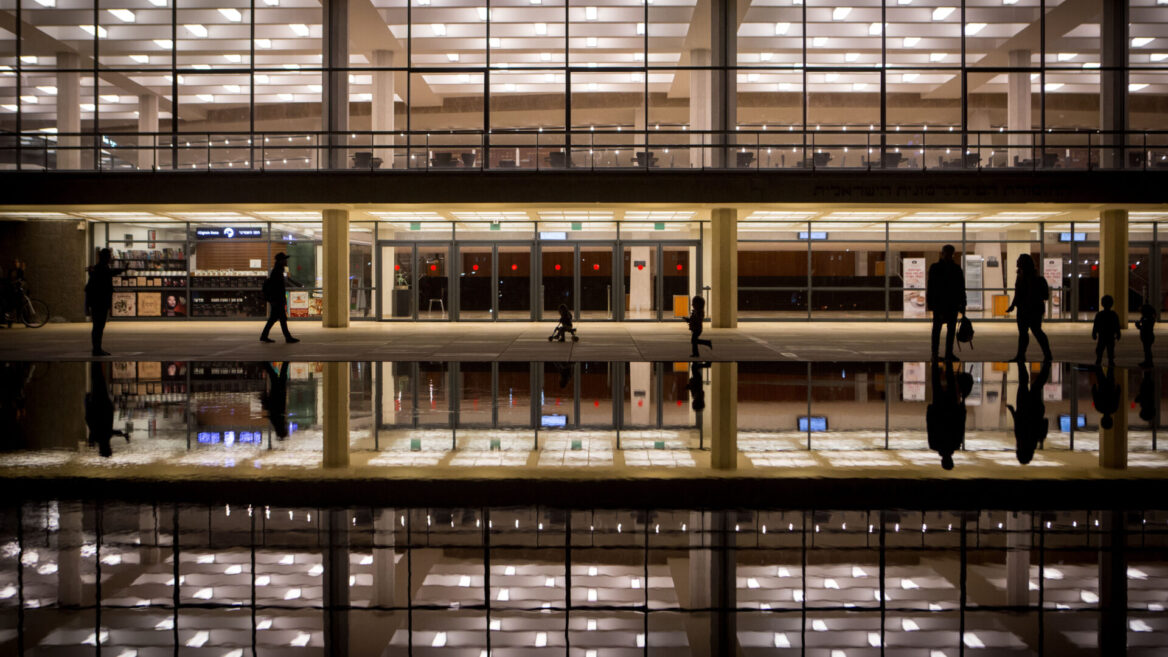 People reflected in a water fountain in front of the concert hall Charles Bronfman Auditorium, at Habima square in Tel Aviv. Photo by Miriam Alster/Flash90

Chances are you already know that Tel Aviv is the Bauhaus capital of the world.

But Israel’s city of seaside fun is not all about curvy balconies and stark white corners. In fact, it’s also full of big, gray buildings built in a style called Brutalism that resonates with local history and ethos.

Brutalist architecture emerged in post-war Europe, where utilitarian buildings were created to meet social needs. The style is characterized by its rawness – brut in French – as expressed in the use of raw cement and the exposure of the buildings’ systems and materials. 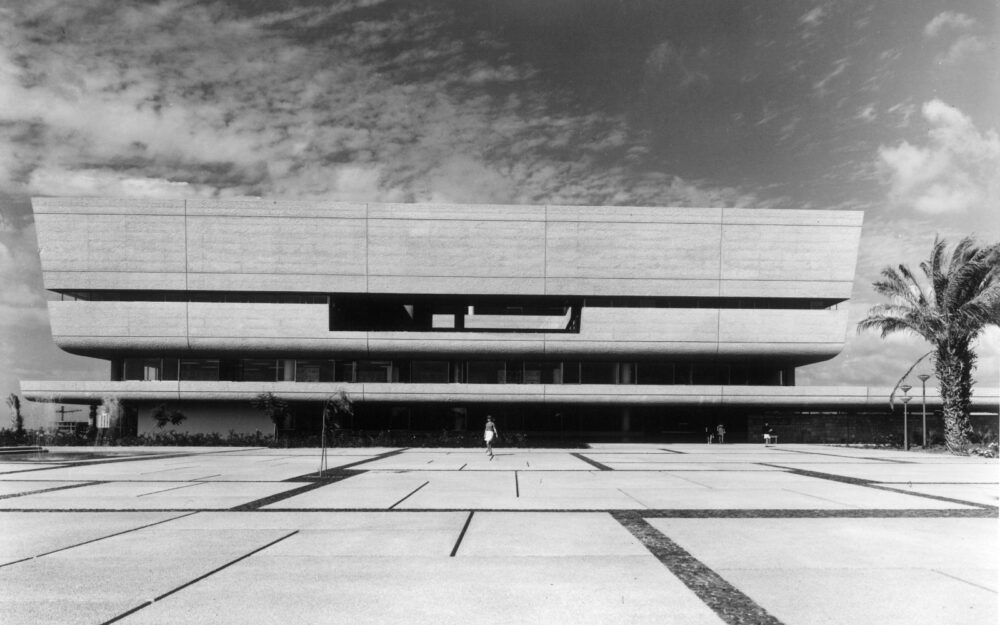 The Tel Aviv Museum of Art is a prime example of Brutalist architecture in the city. (Ran Erde/Dan Eitan Collection)

“It’s very clear. You look at the building and you can see how it was composed. It’s about the truth of the matter,” explains Hadas Nevo-Goldberst from the Tel Aviv-Yafomunicipality’s conservation department.

Nevo-Goldberst and the conservation department’s head, Jeremie Hoffman, authored a book called Aphoria – Architecture of Independence, the Brutalist Style in Tel Aviv Jaffa, 1948-1977 (in Hebrew) that relates the story of Brutalist architecture in the city. Almost all the photos seen here are from the book. 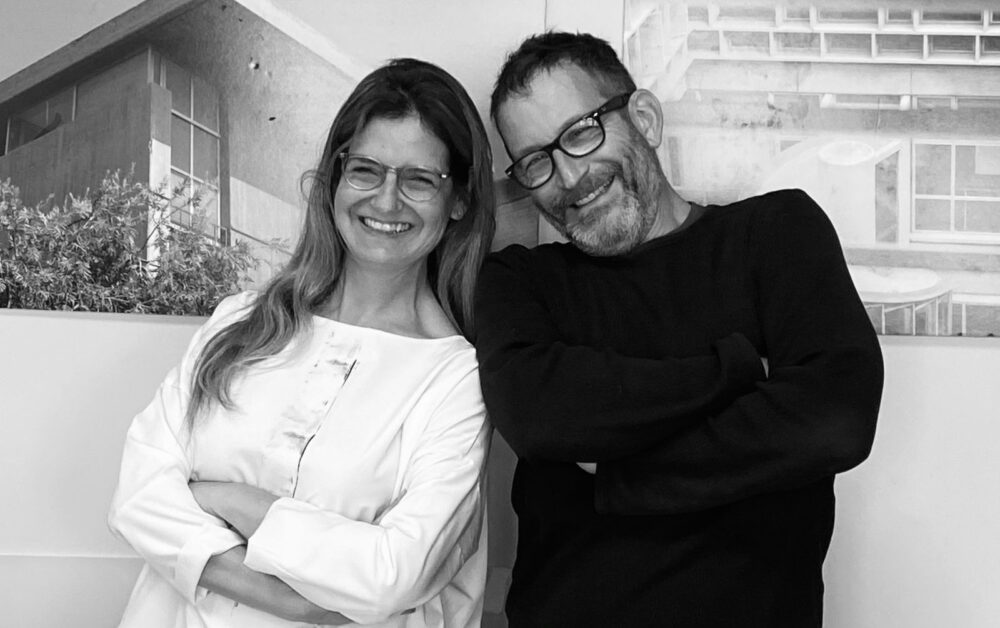 Many of the 300 Brutalist buildings in Aphoria hark back to the creation of the state and were interpreted in a very local style. Brutalism in Israel, Hoffman explains, got a distinctly Zionist flavor because of the purpose it was meant to fulfill. 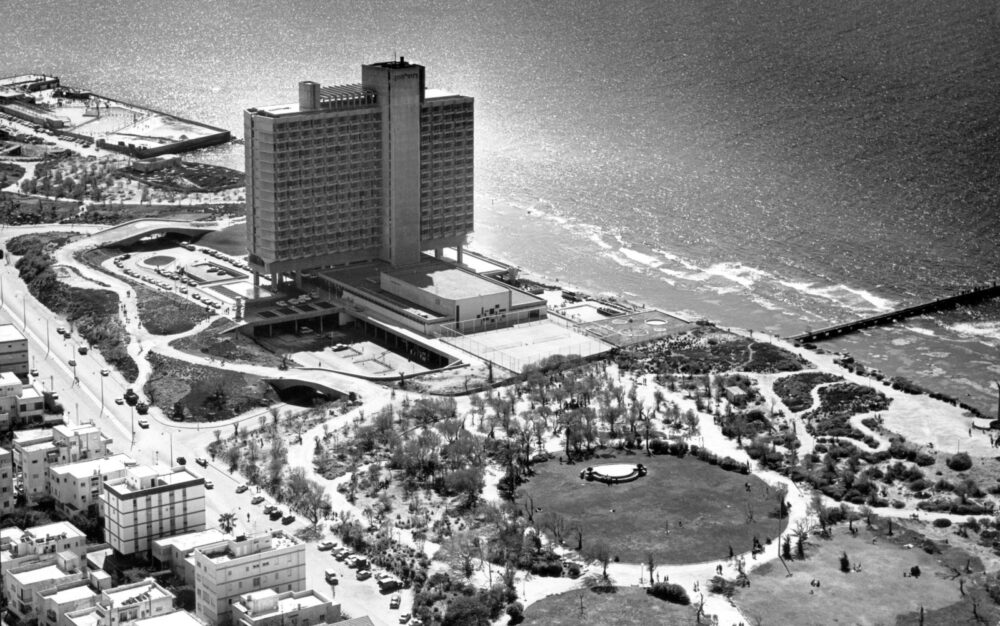 “The first thing was the strategic concept. Brutalism served as a means to present the Israeli presence in a conflictual space,” he says.

“With the creation of the state, the independence that the state required meant that it built a whole system of public buildings and institutions,” Nevo-Goldberst adds.

“It’s a very important time period in both our architecture and our history. It started out in the fifties and sixties, and Brutalism ruled until the end of the seventies, when there was a move toward a new concept of post-modernism.” 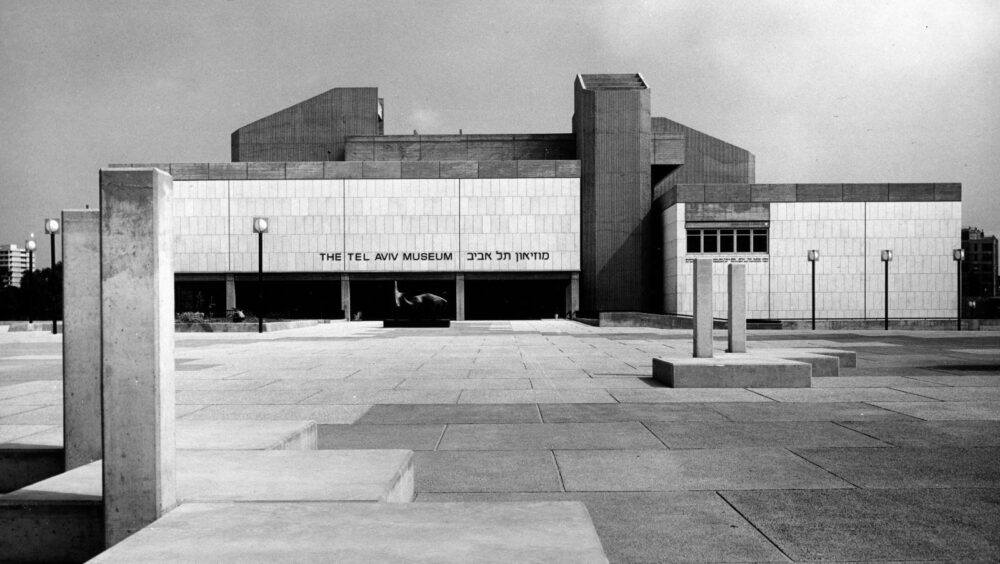 The Tel Aviv Museum of Art is a prime example of Brutalist architecture in the city. Photo by Ran Erde/Dan Eitan Collection

As such, it’s no wonder that both in Tel Aviv and elsewhere – in kibbutzim, rural communities and other cities like Beersheva – courts, universities, bus stations, hospitals and administration centers all got constructed in the uniquely gray Brutalist style.

But it’s not only big public buildings that got the raw cement treatment.

“In the second generation of Brutalism, a new language that is unique to Israeli architects was born. We call it lyrical Brutalism,” Hoffman says. “Cement became a material that creates not only windows or beams, but a much more sculptural and visual expression in monumental architecture.”

He gives as an example the Negev Monument by Dani Karavan, which “presents one end of how cement became an element of architectural sculpturing in Israel. And then there’s architects like Ram Karmi who knew how to create public buildings with a lot of flowing movement, with elements that create very interesting interior spaces as well as links between different masses.” 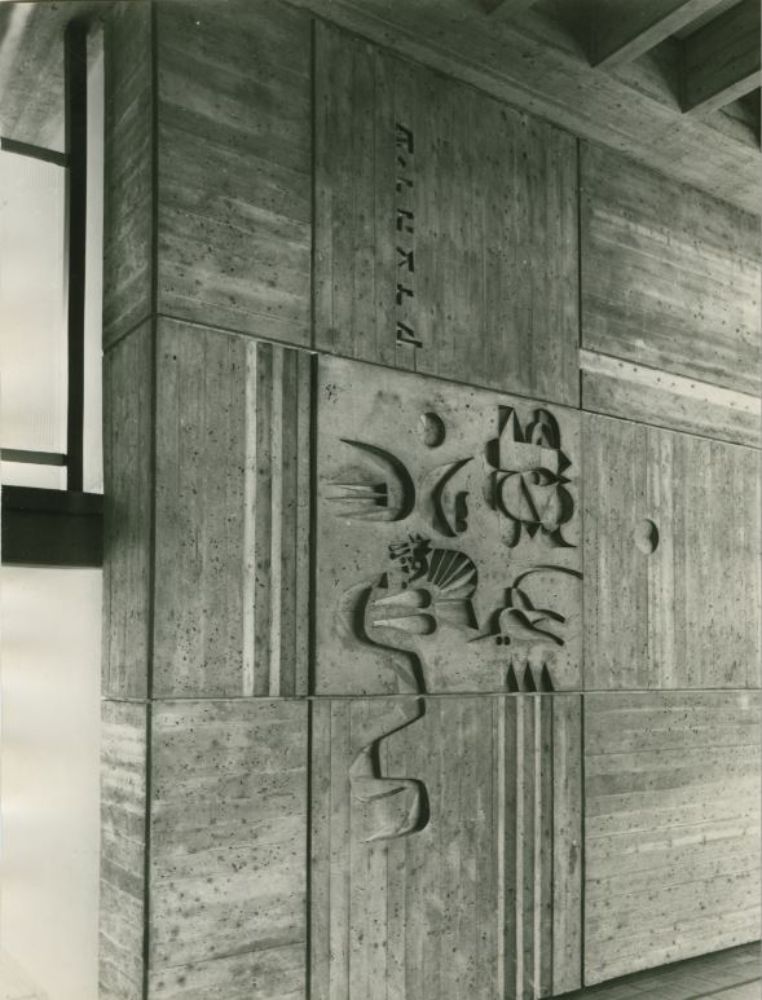 Despite the prevalence of Brutalist architecture in Israel, it’s a style that many people love to hate.

“It very easy for us to criticize what’s right next to us, the generation right before us,” Nevo-Goldberst says of the phenomenon.

“It’s the easiest thing to hate it. But we’re seeing that it’s being rediscovered, for example in the return to the use of cement as a design material. There is also an understanding that its presence in the space is correct and important, both in terms of architecture and what it represents.”

She says she appreciates cement as “an amazing material” with sculptural qualities and “something sensuous about it.”

NeitherNevo-Goldberstnor Hoffman would name their favorite Brutalist building. “The answer is very clear to me, only each day it’s different,” Hoffman jokes.

However, he singles out Tel Aviv’s Charles Bronfman Auditorium as “an iconic building. I personally see in it a model for Brutalism not only on a national level but also on an international one.” 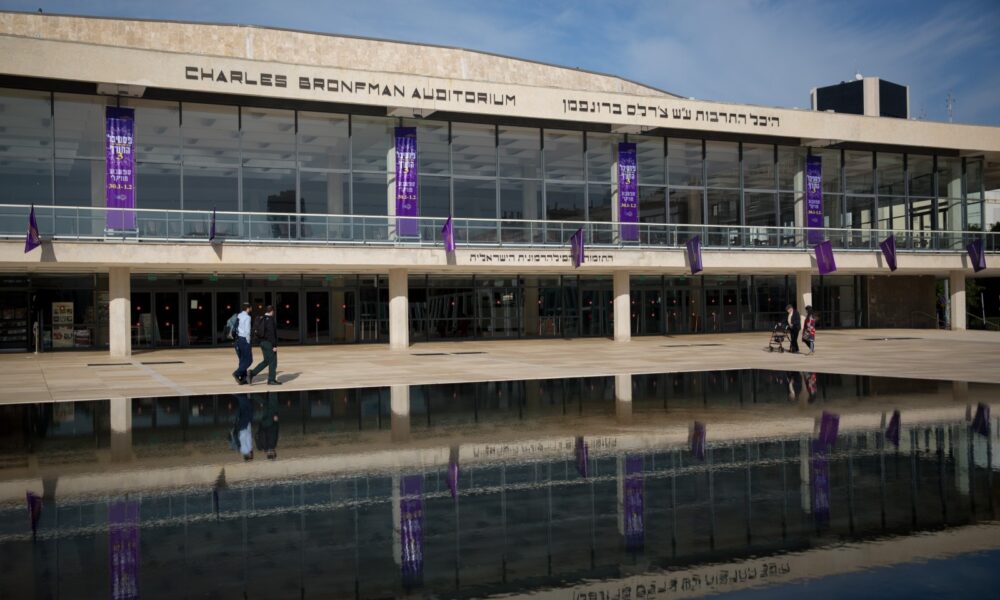 He also cites the Jewish Agency building and the Histadrut building for representing all the characteristics of Brutalism, and Nevo-Goldberstadds the courthouse on Weizmann Street to that list. 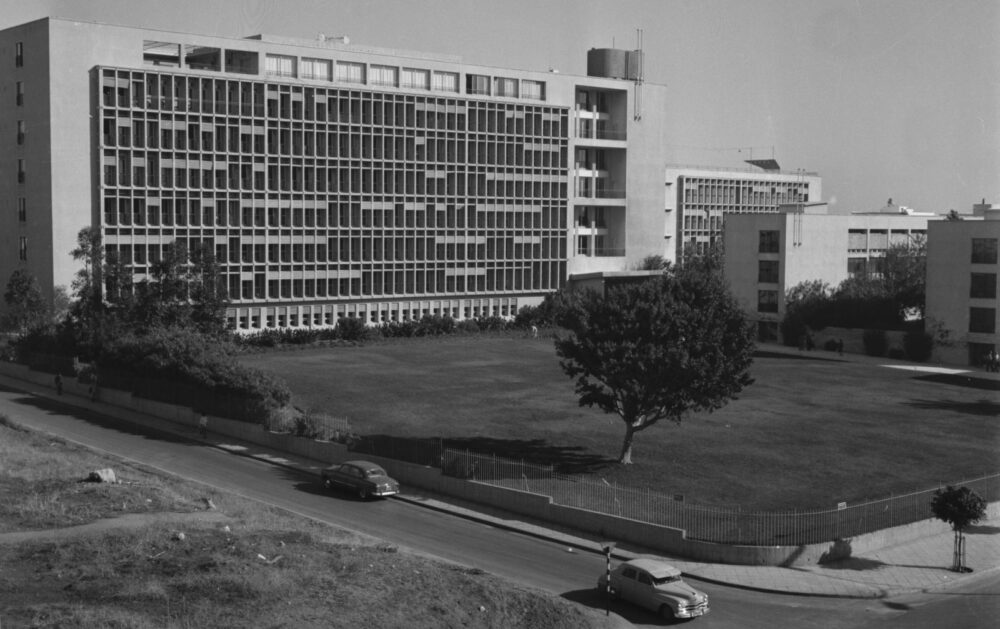 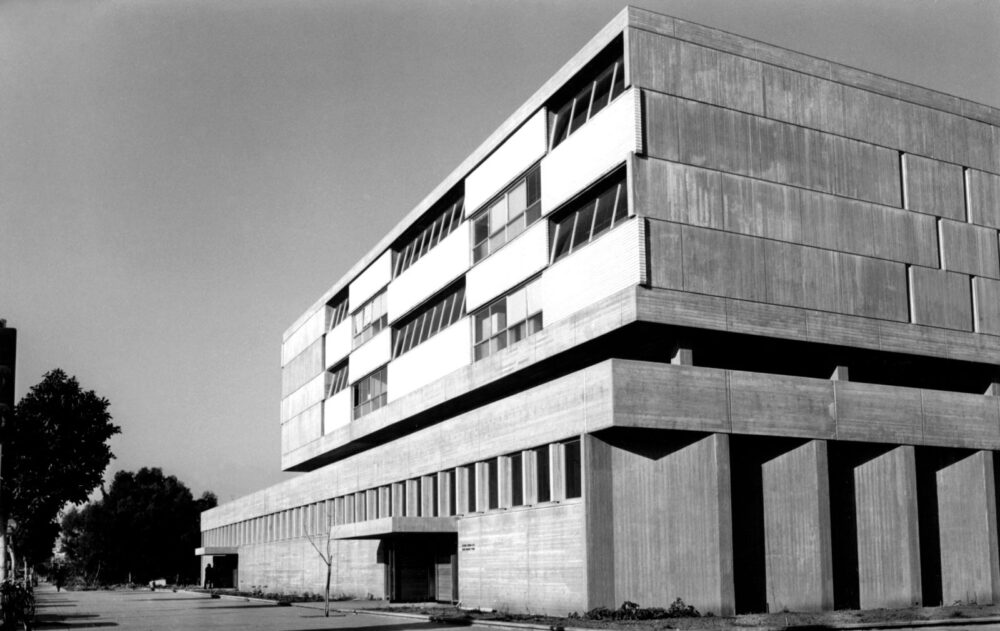 The courthouse on Weizmann Street in Tel Aviv. Photo from Rechter Architects archives

“These are buildings that seem very simple. But then you become aware of the architecture, of the sun shading, how they stand in the space, the public garden,” says Hoffman.

“They represent both the architectural level and the importance of the institutions that they represent – centers of cultural and administrative rule.”