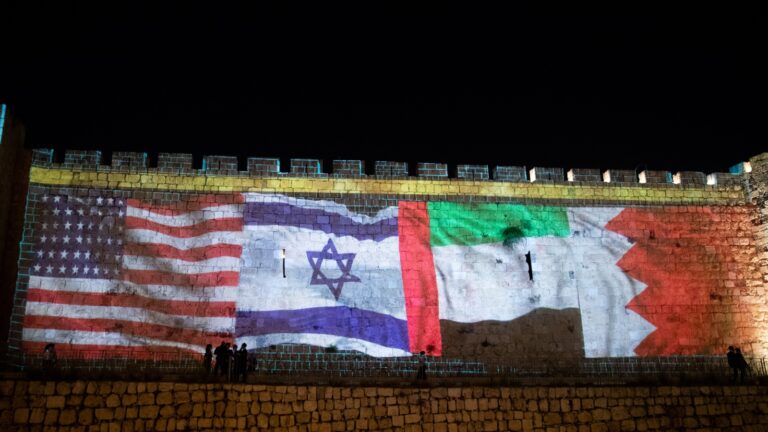 The flags of the US, UAE, Israel and Bahrain are screened on the walls of Jerusalem's Old City in celebration of the Abraham Accords in September 2020. Photo by Yonatan Sindel/Flash90

On Sunday, Israel welcomed the US secretary of state and the foreign ministers of four Arab countries for the first high-profile visit by multiple Middle Eastern dignitaries.

They came for the Negev Summit, taking place in the southern desert over the next two days. Talks will reportedly focus on the common Iranian threat to the region and energy issues.

Following an informal dinner on Sunday night, they will have a prolonged official meeting on Monday morning.

The summit in Israel follows on the footsteps of Israeli Prime Minister Naftali Bennett’s visit to Egypt last week, where he met with Egyptian President Abdel Fattah El-Sisi and the Crown Prince of Abu Dhabi, Mohamed bin Zayed Al Nahyan, and discussed with them developments in the region and the world.

Israel commenced its diplomatic relations with Bahrain, Morocco and the UAE in 2020 as part of the US-negotiated Abraham Accords. Since the accords were signed, Israel embarked on a host of agreements with its newfound allies in the fields of culture, education, science and technology.

The summit is taking place at the newly opened Kedma Hotel in Sde Boker, located within walking distance of the home of Israel’s first prime minister, David Ben-Gurion.

Should they find the time, the visiting dignitaries will be able to enjoy the hotel’s heated pool, fitness room and spa with Turkish baths.

UNCOVER ISRAEL - Get the ISRAEL21c
Weekly Edition free by email
Sign Up Now!
Bring Israel's story to life.
Millions of people around the world rely on us to gain a deeper understanding of Israel. We are the trusted source for original content you won't find anywhere else.
You can make a difference. Donate today to support journalism that brings Israel’s story alive.
SUPPORT ISRAEL21c
Read more on:   News, Abraham Accords, Sde boker, diplomacy