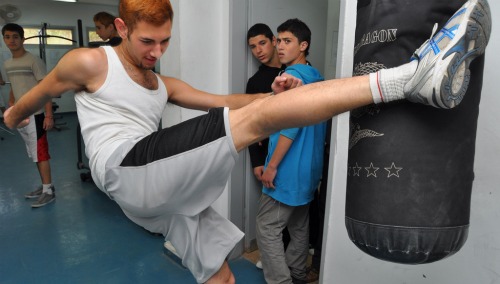 Thanks to an educational program initiated by an American immigrant, the outlook is brighter for scores of Jewish and Arab Israeli children with attention deficit hyperactivity disorder (ADHD), a common neurological condition causing inattention, impulsivity and hyperactivity.

Idud (Encouragement) began as a pilot project in one religious and three secular elementary schools, says its founder, clinical psychologist and educator Stuart (Simcha) Chesner. Now, Idud is going national in cooperation with the Israeli Ministry of Education, and is being implemented at several Jewish schools in New York.

‘Many bright children were failing’

When Chesner moved to Israel in 1991 and began working on the adolescent unit of Hadassah Medical Center, he brought with him fresh insights gained from his work at the prestigious Cleveland Clinic.

“I had worked there with people who were on the cutting edge of the new diagnosis of ADHD,” Chesner tells ISRAEL21c. “At Hadassah, I saw dozens of dropout, underachieving adolescents being referred for psychiatric treatment for emotional problems. I saw that many matched the ADHD diagnosis, but it was not known here then. So I started speaking to doctors and psychologists about it, to introduce the notion.”

He even took his message to the Knesset and the Jerusalem Ministry of Education. “Many bright children were failing and getting involved in drugs and crime as a result of not being diagnosed,” he told them, stressing the need for appropriate educational settings.

Photo by Mike Horton
“If we can prevent the emotional scars, we can have incredibly productive human beings,” Dr. Simcha Chesner, founded of Idud.

Chesner opened Israel’s first clinic for ADHD patients, Matara (Goal). In 1993, with support from the US non-profit Jacob’s Ladder, he founded the first school in the country for adolescents with ADHD, Bnei Chayil in Jerusalem.

“We were the first project in Israel to go into the regular elementary school system to provide diagnosis, treatment, and training for staff and parents about ADHD,” says Chesner. “We targeted four schools from difficult areas socio-economically, with the goal of identifying children who had the disorder and using the school as a center for treatment and for training parents and teachers.”

They discovered that about 80 percent of ADHD students in those schools were not being diagnosed, treated or medicated. “There was an assumption that behavioral and learning problems were more the result of sociological than neurological factors, and that was a big mistake.”

Chesner designed Idud as a child-centered program to help affected children view their challenges positively and optimistically. They (and their parents and teachers) learn about the unique way their brains are “wired,” and how this leads to certain behaviors. They’re taught to understand how their thoughts and feelings influence these behaviors and how mindfulness can effect behavior changes. Finally, they are shown how to change the “scripts” governing their often-negative relationships with the adults in their lives.

The three-year pilot was evaluated by the Brookdale Institute of the American Jewish Joint Distribution Committee, which found that more than 90% of the children treated had improved so dramatically that they were no longer identifiable as ADHD students, relates Chesner.

“Principals reported that the program also transformed the school. Teachers had better communication skills and sensitivity in providing for ADHD students’ emotional needs – and learning is a byproduct of those emotional needs being filled.”

This success prompted the Israeli government to roll out Idud nationally in the 2010-2011 school year as part of an agenda to better serve at-risk students. Cities that have chosen to participate in the program range from ultra-Orthodox to Arab.

Osnat Dery, head of B’Yachad, an Israel organization for parents of children with ADHD, is helping to implement Idud in Tira, a northern Arab city. Here, she faces low awareness and high fear of stigma among parents concerning ADHD. However, she says, “Tira has warm teachers and principals. They’re very welcoming and interested in learning more.”

This spring, she will show parents the Arabic translation of a film on ADHD she co-produced in partnership with the Ministry of Education as a prelude to support and informational sessions.

“We tend to think of Jewish mothers as being protective and loving, but so are Arab mothers and teachers,” says Chesner. “They’re very motivated to learn.”

Chesner explains that the characteristic impulsiveness of ADHD kids results from a “sleepy” frontal lobe, which governs organization, planning and self-control. Because they often experience failure, criticism and rejection, they’re conditioned to have low expectations of themselves.

“The whole basis of Idud is to teach parents and teachers to continuously be sources of encouragement and positive optimism for these children,” he says.

ADHD is predominantly a male phenomenon, he adds, but that may be due to underdiagnosis among girls, who don’t manifest the disorder in the same way. “We don’t see as many girls burning down buildings,” as he puts it. A few girls’ schools in Israel’s religious sector are starting to address this.

As word of Idud spreads, Chesner is helping to set up a parent coaching system through a Brooklyn organization representing thousands of special-needs students in Hasidic schools. Partly in answer to countless emails and phone calls from overseas Jewish parents seeking advice and services, he founded Matara Alternative Residential Program, offering a unique Jewish curriculum and intensive residential treatment currently housing six boys from the US, England and Belgium.

He continues to run Bnei Chayil, too. “Our school is like a laboratory out of which a lot of the different programs and techniques come. We have 120 boys in grades 7-12, who have been thrown out of other schools or were on the verge of being expelled. The majority finish with a full matriculation diploma, and almost all serve in the IDF and continue to higher education,” he says.

Chesner stresses that most kids with ADHD catch up with their peers neurologically by early adulthood. “What’s left are the emotional scars they’ve taken on in childhood and adolescence. If we can prevent those scars, we can have incredibly productive human beings.”