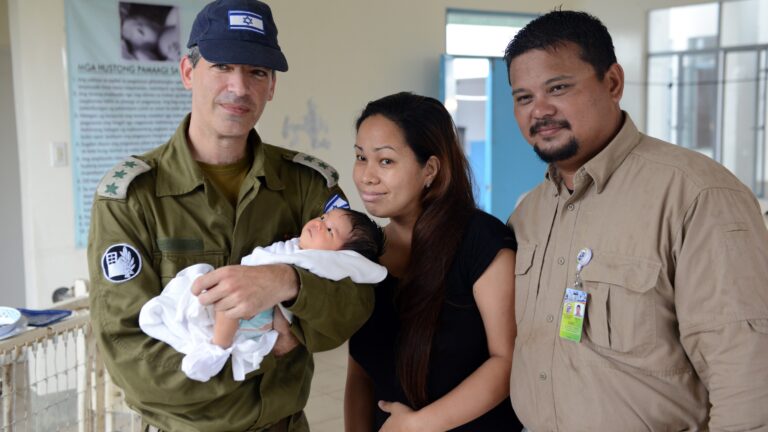 The IDF medical team in Bogo City in the Philippines treated its 2000th patient over the weekend. One out of every three patients at the field hospital is a child, the IDF Spokesperson’s Unit says.

Another baby was named for the Israeli doctors over the weekend. Louis, the head of security in Cebu, named his daughter Shai, after IDF Military Attaché to the Philippines Col. Shai Brovender. Baby Shai was born in the IDF field hospital.

The Israeli doctors and nursing staff have been treating all Philippine patients wanting to see a doctor – whether they were affected by Typhoon Haiyan or not. For many, this was the first medical care they ever received.

The IDF team successfully treated four patients with Pterygium, and restored their sight. News got out about the eye operations and the IDF reported that two other candidates arrived at the field hospital for surgery.

Pterygium – a common eye condition that when untreated can cover the pupil of the eye and interfere with vision – is extremely common in the Philippines, IDF doctors said. Many of those afflicted cannot afford the surgery to correct their eyesight.

“The local nurse who helped translate was so excited that he was jumping up and down with the patients who reported that they could see his fingers following the surgery,” Reuven Gelfond, head operating room nurse at Hadassah Medical Organization on Mount Scopus, told Ynet news. “You feel as if you returned life to someone and that feeling is unbelievable. The patients thanked us profusely.”

Speaking to the Hadassah Medical Organization website, Gelfond said: “We are a light in the darkness of this poor, badly damaged region.”

Press play on this video to see Israeli aid in action:

UNCOVER ISRAEL - Get the ISRAEL21c
Weekly Edition free by email
Sign Up Now!
Bring Israel's story to life.
Millions of people around the world rely on us to gain a deeper understanding of Israel. We are the trusted source for original content you won't find anywhere else.
You can make a difference. Donate today to support journalism that brings Israel’s story alive.
SUPPORT ISRAEL21c
Read more on:   News, Philippines, Typhoon Haiyan, israel philippines, Humanitarian Aid, Israel Defense Forces (IDF)