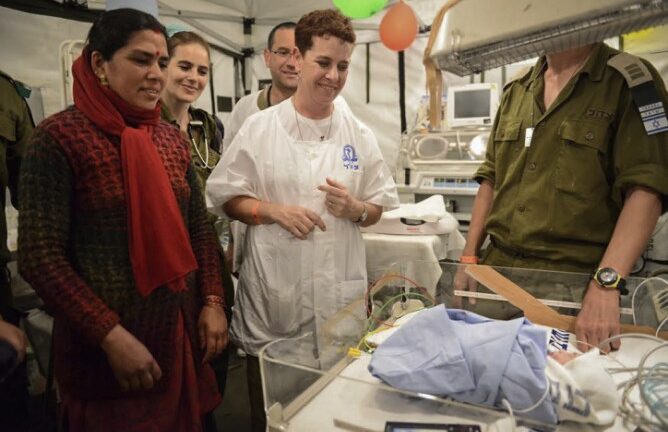 This baby boy was delivered yesterday by the IDF medical delegation. Photo by IDF Spokesman's Office 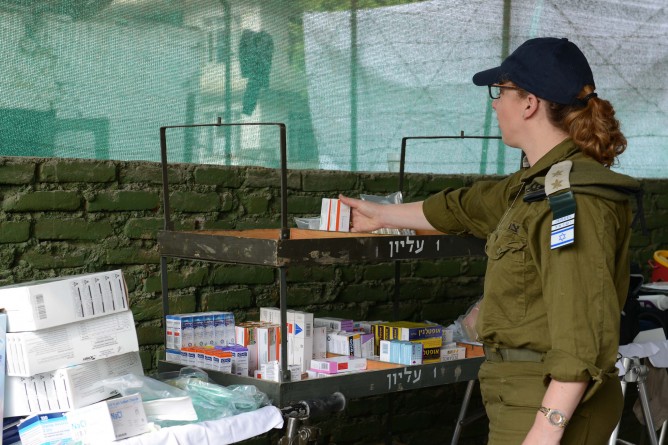 The field hospital in Kathmandu is stocked with supplies and medicines brought over by the IDF. Photo courtesy of IDF Spokesman’s Office

About 100 Nepalese patients arrived in the first few hours of operation of the Israel Defense Forces’ field hospital set up on April 29, some having just been pulled from the rubble days after last Saturday’s earthquake, according to Col. Dr. Ofer Merin, medical commander of the IDF field hospital.

The makeshift hospital also delivered its first baby only hours after setting up. The 2.1-kg (4.6-pound) boy and his mother are in good condition. 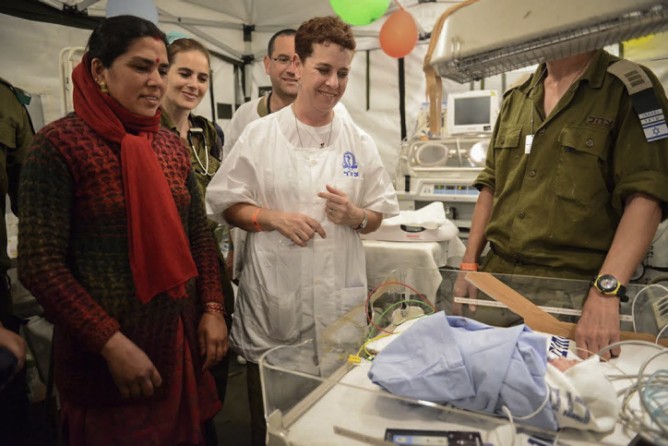 This baby boy was delivered yesterday by the IDF medical delegation. Photo by IDF Spokesman

Speaking with ISRAEL21c and other reporters in Israel via satellite, Merin said the earthquake casualties fall into four categories.

“The first group is people from [outlying] villages. Many were three or four days under the rubble until they could be evacuated by choppers, some in really bad condition,” said Merin.

“The second group is overflow from the Nepal army hospital next door to our field hospital, especially intensive care patients. Most have severe crush injuries.”

The third group is mountain trekkers rescued by helicopter, some of whom are suffering from frostbite. The last group is patients living in Kathmandu and lightly injured in the quake but unable to get immediate medical attention until the Israelis arrived.

The field hospital is the IDF’s largest ever deployed. It is staffed by a multidisciplinary team to handle trauma, pediatrics, OB/GYN, medical, surgical, orthopedic and intensive care. The facility includes a lab and x-ray machine, and a unique IDF medical informatics system to register and track patients electronically, explained Merin.

“Each physician moves around with a handheld tablet that has all the information about every patient including photos and demographic data, x-rays and lab reports. We have found this system to be especially helpful in handling mass casualty events in Haiti, Japan and the Philippines.”

Merin has managed other IDF field hospitals in disaster areas. In civilian life, he is chief of the trauma unit and emergency preparedness program for mass casualties at Shaare Zedek Medical Center in Jerusalem.

The field hospital personnel also took with them powdered blood, another Israeli invention for the battlefield. “You just add water and it’s like fresh plasma. We used it in other missions and it’s very helpful,” Merin said.

The Israelis work hand in hand with the Nepal army hospital, he emphasized. In the next few days, hundreds more people are expected to need care after being rescued from rubble by disaster response teams from several countries, including Israel.

“As far as I know, we are the largest unit operating here now,” says Merin. “Many countries have responded, but we have privilege of getting here earlier and giving medical care to all of the injuries we encounter. We came as a self-sufficient unit, bringing our own water, food, generators and fuel.”

UNCOVER ISRAEL - Get the ISRAEL21c
Weekly Edition free by email
Sign Up Now!
Bring Israel's story to life.
Millions of people around the world rely on us to gain a deeper understanding of Israel. We are the trusted source for original content you won't find anywhere else.
You can make a difference. Donate today to support journalism that brings Israel’s story alive.
SUPPORT ISRAEL21c
Read more on:   News, Israeli hospital in Kathmandu, IDF field hospital, Medical devices, Health, Social Action, Humanitarian Aid, Israel aid in Nepal