The multiethnic troupe formed by Idan Raichel is a ‘blend of all those sounds that Israel has been absorbing for the past 63 years.’

The long dreadlocks framing the face of superstar Israeli musician Idan Raichel are his signature to fans across the world, second only to his unique multiethnic ensemble that has rebranded Israeli music for the 21st century.

And yet, he reveals in an interview with ISRAEL21c, he’d shave his hair off without hesitation — for the right price. “I definitely want to cut it,” Raichel says, “if someone will donate [to charity]. It would be nice if once a year there would be a day in Israel when [celebrities] donate their hair for different causes.”

Difficult as it is to imagine the 34-year-old pianist and composer with a shaved pate, the notion of buzzing his head for the greater good is squarely in character. When asked why he has traveled to Rwanda and Ethiopia as a “goodwill ambassador” for the Israeli medical charity Save a Child’s Heart, he quips, “It’s not that they were impressed with my performing surgery. This organization does great work, bringing over 2,600 kids from 42 countries for heart operations [at the Edith Wolfson Medical Center] in Holon — Palestinian kids, too. I wanted to help them get more exposure.”

From mom’s basement to triple platinum

Growing up in suburban Kfar Saba, Idan started playing accordion at age nine and moved on to keyboards as a teenager. His tastes ran to the exotic — gypsy music and tangos — and he studied jazz in high school before winning a coveted spot in the Israel Defense Forces band.

After the army, he worked as a session musician and as a counselor in a center for immigrants, many of whom were Ethiopians who introduced him to their musical traditions. Setting up a studio in his parents’ basement, Raichel invited 70 friends to join him in producing a demo disc, which was snapped up by Helicon Records.

That 2002 album, featuring the hit single “Bo’ee” (“Come With Me”) prefaced by Amharic lyrics voiced by Cabra Cassai, was released worldwide by Cumbancha in 2006 and went triple platinum.

When concert requests started rolling in, Raichel chose seven of his original collaborators to comprise the Idan Raichel Project, playing what’s often referred to as Israeli-Ethiopian fusion but has since branched out. The group’s 2009 album, “Within My Walls,” includes numbers sung in Hebrew, Spanish, Creole, Swahili and Moroccan Arabic, backed by a 24-piece orchestra.

The ensemble has a steady core of vocal and instrumental talent. Its most noted singers are Cassai and fellow Ethiopian Avi Wassa, well-known for his Amharic opening to Raichel’s wildly popular “Mi’Ma’amakim” (“From the Depths”) (see video below), in addition to Maya Avraham, the sultry voice behind the ballad “If You Go.” But it’s a strictly fluid group.

“Musicians always write us, and sometimes we contact those we want to join us,” says Raichel. “We’ve performed with about 90 musicians, some of them for just a one-time concert. Lately we had the great honor to record with India Arie. She joined us for some live concerts in New York and the East Coast. And I’ve started working with a Somalian guitar player.” 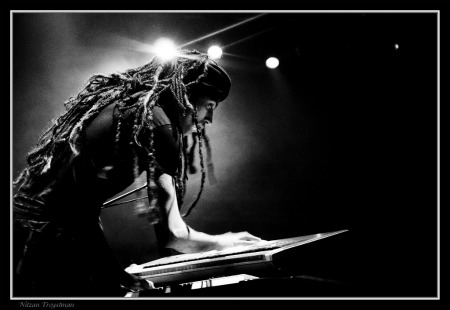 Photo by Nitzan Treystman
On stage, Raichel mainly stays at his keyboard, giving the spotlight to the others in his ensemble.

Raichel waves off the risks inherent in sharing the stage with a changing cast of characters representing a wide range of musical styles and traditions.

In 2006, the Idan Raichel Project opened the fifth annual Ethiopian Music Festival in Addis Ababa, the first time Israeli artists had ever performed there. The group has since performed to sold-out crowds from New York’s Central Park to Australia’s Sydney Opera House.

This summer and fall, Raichel and his troupe will play in Madrid, Milan, Budapest, Berlin, Timisoara (Romania) and Warsaw, in addition to several California cities. Raichel frequently stages concerts in Israel; in June, he appeared with India Arie in Tel Aviv.

“I hope that in 2012 or 2013 we will perform in Japan and China,” says Raichel, who has performed in Thailand, Hong Kong and Singapore. Raichel always positions himself at his keyboard at stage left, allowing each member of the ensemble to shine individually while performing the songs he writes, arranges and produces.

Raichel says his inspirations come from a variety of places — the Bible, nature, letters from fans.

Despite the group’s multiethnic makeup, says Raichel, “We are very proud Israelis. Wherever we go, people see our music as world music — but for us it’s Israeli music. And in every interview, whether it’s for the New York Times or Al Jazeera, we identify ourselves as Israeli musicians. We became, without even wanting to be, cultural ambassadors.”

He humbly acknowledges his role in shaping the Israeli sound, which is new on the world scene. “Tourists mostly knew about the hora [folk dance], and later on others brought their own heritage — Ofra Haza brought in Yemenite chants, Chava Alberstein brought in Yiddish culture, and now we’re bringing the heritage and the roots, the blend of all those sounds that Israel has been absorbing for the past 63 years.”

On July 13, the Idan Raichel Project’s long-awaited live album, a triple CD, is due for release. “Many fans asked for this,” says Raichel. “I’ve been recording concerts for two years and I just took the best of them.” It will include extra tracks of never-released material, and rare acoustic shows.

Five years ago, when Raichel realized he’d be in great demand for media interviews around the world, he changed his email and SMS settings to English and asked people to be patient as he mastered the language.

But he has no intention of ever leaving Israel permanently.

“It’s a very Israeli thing to always come back home,” he says. “I love to play outside of Israel and I love to take a walk in Santa Monica or in Barcelona after concerts, but you should always know where you came from and where you’re headed to and to whom you will give your final report when your day will come. Sometimes I ask singers, ‘When your day comes to pass away, where do you want to be buried?’ Israeli artists always say, ‘I want to go back to the homeland.’ Well, I’m not waiting till then; I want to be here now.”

UNCOVER ISRAEL - Get the ISRAEL21c
Weekly Edition free by email
Sign Up Now!
Bring Israel's story to life.
Millions of people around the world rely on us to gain a deeper understanding of Israel. We are the trusted source for original content you won't find anywhere else.
You can make a difference. Donate today to support journalism that brings Israel’s story alive.
SUPPORT ISRAEL21c
Read more on:   People, Music, Idan Raichel