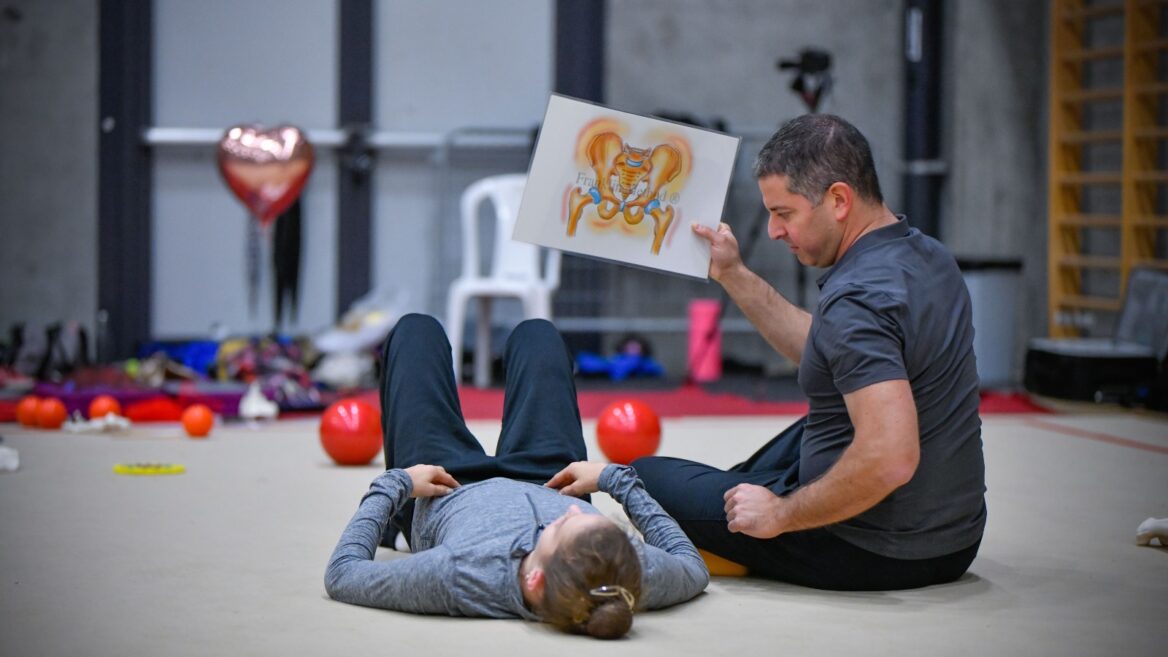 Most of us can conjure up a vivid mental image of our favorite food. Just thinking about it can make our mouths water.

Over the past year, he worked with Israel’s Olympic rhythmic gymnastics team, which finished the Tokyo Games in sixth place.

“Mental imagery by itself has been extensively used and researched. Even ancient Egypt used mental imagery,” Abraham tells ISRAEL21c.

“Our lab is one of very few in the world studying the neurocognitive aspects and integrating it into training and rehabilitation. Some of the things we are doing in this field for the very first time internationally.” 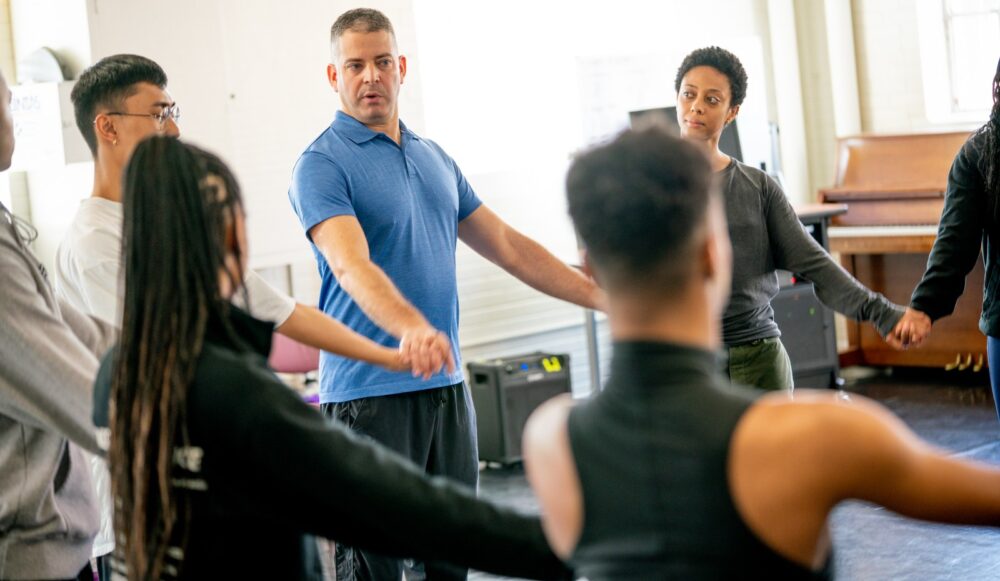 Dr. Amit Abraham in Georgia, teaching Alvin Ailey dancers how to use mental imagery for foot and ankle balance and stability. Photo courtesy of Amit Abraham

The lab’s goal is to provide scientific evidence for the motor and cognitive benefits of creating experiences in the mind.

“We do group and one-on-one sessions in a specific process of bringing to life the mind-body connection,” he explains.

“A lot of athletes visualize before competing. But they are not trained in how to use this efficiently as a tool to its fullest potential. That is my goal.”

In his initial session, he often needs to overcome participants’ hesitancy. “People think mental imagery is childish and feel embarrassed to use it, especially in a group setting,” Abraham says.

“So we start from scratch by explaining how to use it, what are its possibilities and limitations, the science behind it, and how to address lack of belief in it. Once people get excited about it, they can step out of their comfort zone and then it’s easier.” 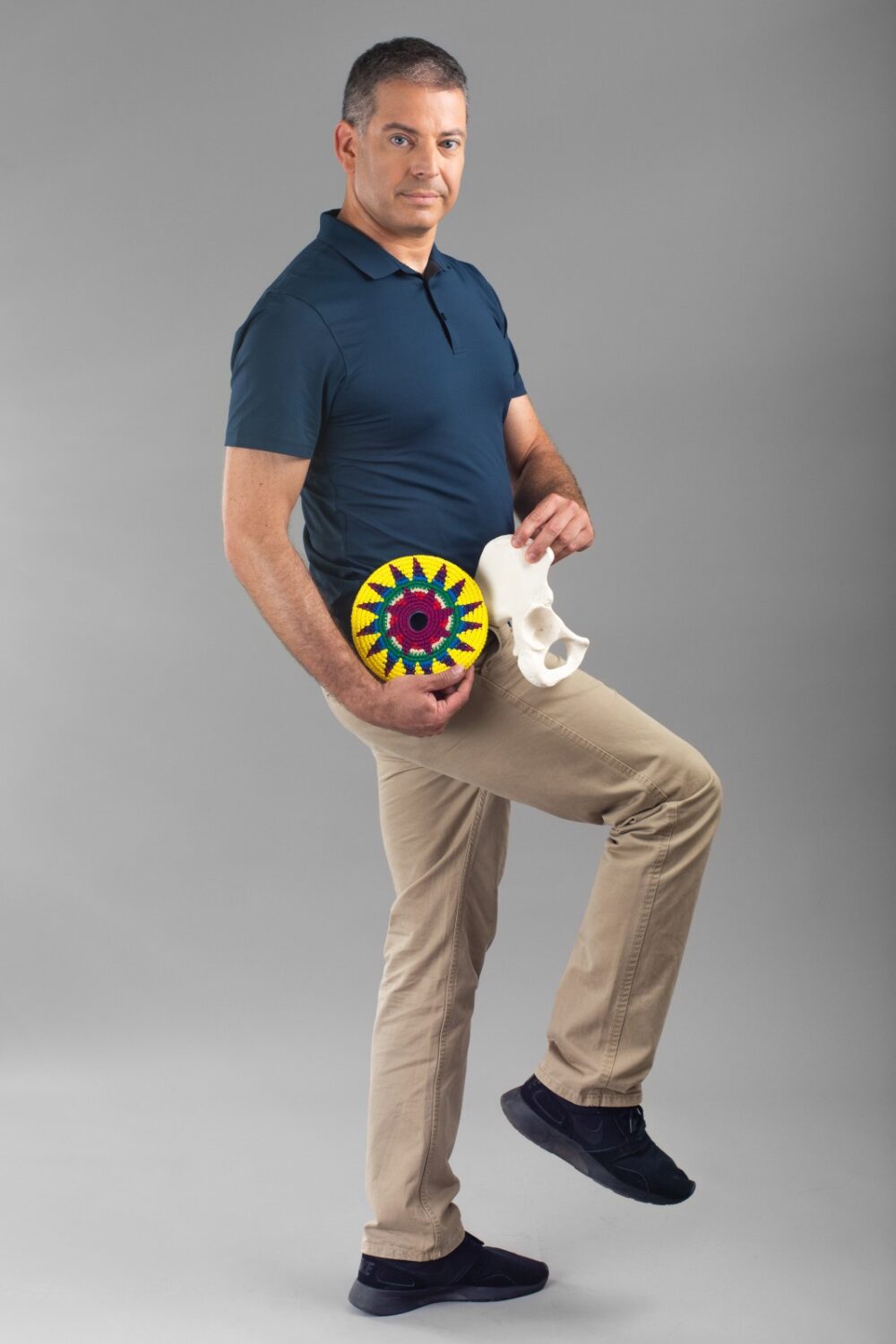 Dr. Amit Abraham demonstrating metaphorical imagery of the pelvis as a wheel, rotating backwards when lifting the knee. Photo courtesy of Ariel University

Abraham explains that just as it’s possible to imagine the taste of coffee without drinking it, you can imagine moving your arm without moving it.

“Or you can lift your arm slightly while imaging your arm doing a full range of motion,” he says.

“If you want to improve your quality of movement, you can imagine your arm as light as a feather. That’s called ‘metaphorical imagery’ and it’s a core component of the Franklin Method,  developed my mentor and colleague, Eric Franklin, for teaching body alignment.”

This is not always simple. For someone has lower back issues, for example, it is challenging to image the spine moving fluidly without pain.

“We are confronting a reality that doesn’t always match the imaging,” Abraham says. “However, this is exactly the huge potential of mental imagery — to overcome the reality with the goal of changing it.” 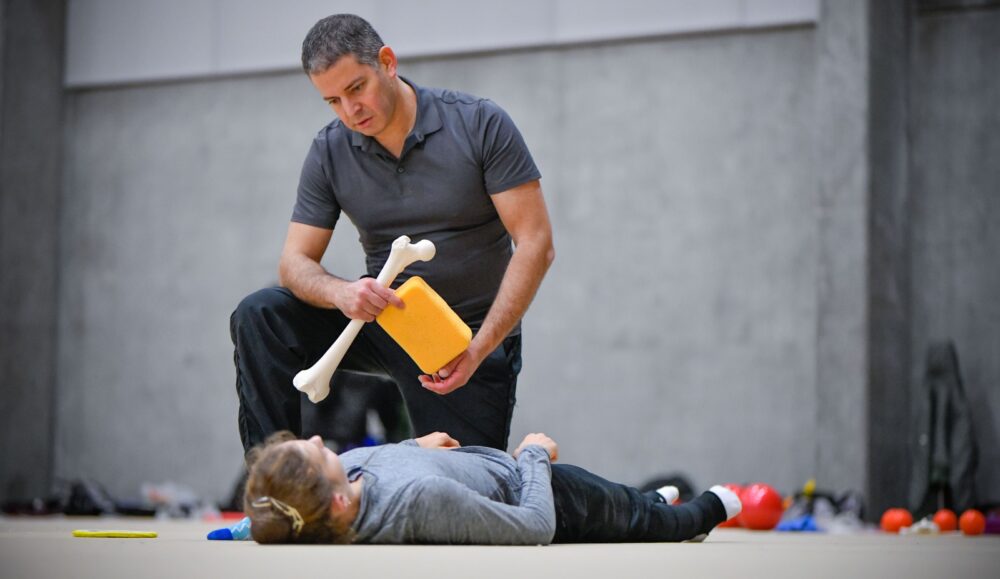 The final step is individualized interventions or training protocols, whether for a rhythmic gymnast or an individual with Parkinson’s disease.

“My training as a musculoskeletal physical therapist helps because we can address a problem mechanically as well as with mental imagery,” says Abraham.

“We’re trying to be less dependent on the therapist or on technology and more focused on the individual’s potential for self-empowerment.”

Abraham finds that if the team trainer or coach is open to trying this evidence-based approach it’s more likely to catch on with the athletes.

In the case of Israel’s rhythmic gymnastics team, head coach Ira Vigdorchik was quite enthusiastic to try this approach.

Abraham did group training in collaboration with Vigdorchik’s coaching team, individual training to address specific areas for improvement, and an assessment of how the trainings impacted performance.

“We started with traditional motor imagery: They lie on their back and mentally image the entire sequence of an exercise. We made it more codified, feeling the sensations and perspectives of first and third person,” he says.

Abraham also does metaphorical imagery. For example, while balancing on one leg the gymnast visualizes that leg as a tree rooted in the mat. 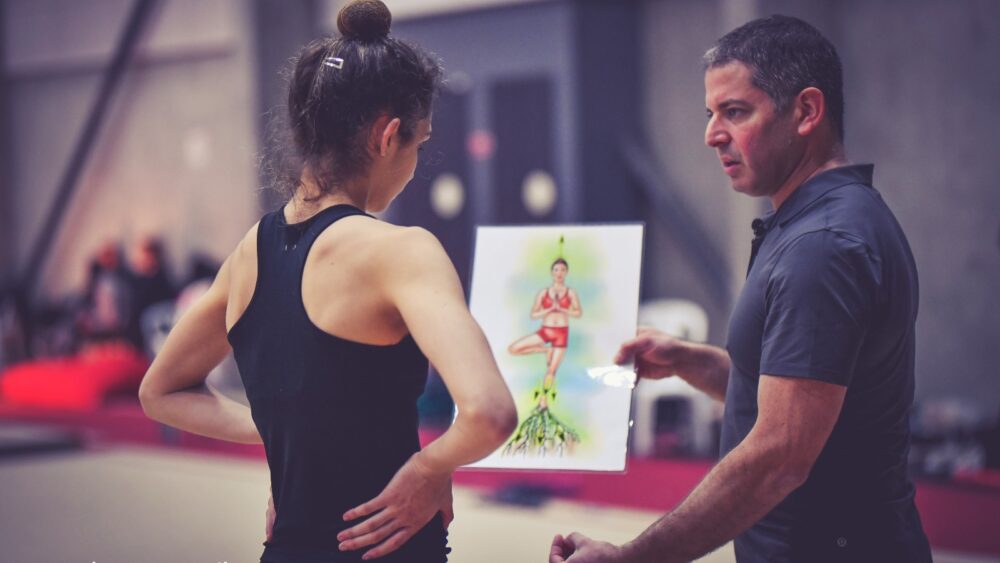 Team member Bar Shapochnikov tells ISRAEL21c: “The mental imagery work with the Franklin Method and Dr. Abraham helped me enhance my performance. My range of motion increased, my confidence in performing increased, and the training became more efficient.”

Abraham admits that achieving further improvements at this high level of expertise is extremely difficult. “Therefore, we’re constantly looking for novel approaches that can help the gymnasts and athletes without putting them under even greater physical stress.”

At Emory, Abraham did the first research on integrating dynamic neurocognitive imagery into Parkinson’s disease rehab.

He tailored a pilot intervention, based on the Franklin Method, to correct distorted mental representations of the body that can worsen motor and cognitive functioning.

“Parkinson is a multifaceted condition, mostly known for slowness of movement, rigidity, balance dysfunctions and resting tremor. But about 60 percent of individuals also have sensory and cognitive deficits that are less talked about. We thought mental imagery could address these deficits,” he explains.

This unique embodiment approach taught people to connect imagery with physical sensations. This intervention eased both motor and non-motor symptoms of the disease, as described in a paper Abraham and colleagues published earlier this year in a special issue of Brain Science exploring novel therapies for movement disorders.

“We have to develop protocols in this and other neurological and orthopedic populations,” says Abraham.

“It’s kind of out of the box to focus on different populations but I see mental imagery as connecting them all.”

Abraham aims to become an international leader in the field of mental imagery for rehabilitation and performance.

“We collaborate with various researchers in the US and Europe, but this is more than just research. We are looking to really make an impact on dance and gymnastics performance. We are constantly looking for teams and dance companies worldwide willing to try it to enhance performance and wellbeing,” he says. “Shoot me an email amitab@ariel.ac.il if our research intrigues you.”

UNCOVER ISRAEL - Get the ISRAEL21c
Weekly Edition free by email
Sign Up Now!
Bring Israel's story to life.
Millions of people around the world rely on us to gain a deeper understanding of Israel. We are the trusted source for original content you won't find anywhere else.
You can make a difference. Donate today to support journalism that brings Israel’s story alive.
SUPPORT ISRAEL21c
Read more on:   Health, Ariel University, mental imagery, rhythmic gymnastics, Parkinson's