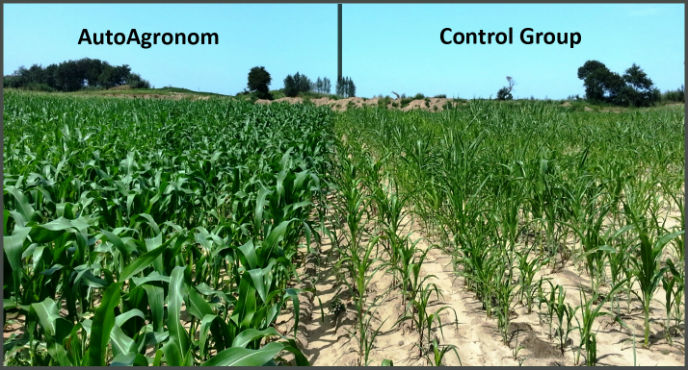 Results of the Root Sense system.

Results of the Root Sense system.

This is one of the most pressing issues in the world as population spikes upward alongside a reduction in usable farmland and available water. Commercial farmers everywhere, including the world’s most populous country, are seeking ways to grow more food crops with fewer resources and waste.

AutoAgronom seeks to fill this need by taking Israeli drip-irrigation to the next level. Its Root Sense technology uses sensors to examine a variety of soil and weather conditions around the roots. After analyzing that data via advanced algorithms, the system’s controller provides automatic irrigation and fertilization (“fertigation”) customized to each crop.

“By tailoring our solution, we have been able to show tremendous traction with over 70 types of crops, significantly increasing crop yields while reducing the use of water up to 50 percent and fertilizers by 70%,” says AutoAgronom’s vice president for international marketing Osher Perry.

He spoke with ISRAEL21c from Boston, where AutoAgronom is wrapping up a four-month accelerator program at MassChallenge Israel for promising startups.

In November, Perry will head to California to start marketing the Israeli solution to drought-stricken farmers, and to represent AutoAgronom at the CleanTech Global Forum competition. It placed first ahead of Paulee CleanTec, BreezoMeter, EVR Motors  and GreenIQ  at the Israeli CleanTech Open Global Ideas finals on September 10.

AutoAgronom launched in 2008 after a decade of research and development by CEO Nissim Danieli, a farmer with experience in controller systems, and CTO Shaya Redler, an expert in technologies based on “fuzzy logic,” which deals with approximate reasoning.

A single Root Sense system can cover 250 acres and consists of seven sensors, a controller and software. Irrigation is achieved through capillary movement of water through non-drain drip lines, using less water than in regular drip irrigation.

“The rest of the systems available to growers today are ‘decision support systems’ where you have sensors but the farmer still has to make decisions. With our system, the decisions are made automatically, while the software allows the farmer to monitor the system and identify problems, which can be very costly,” says Perry. 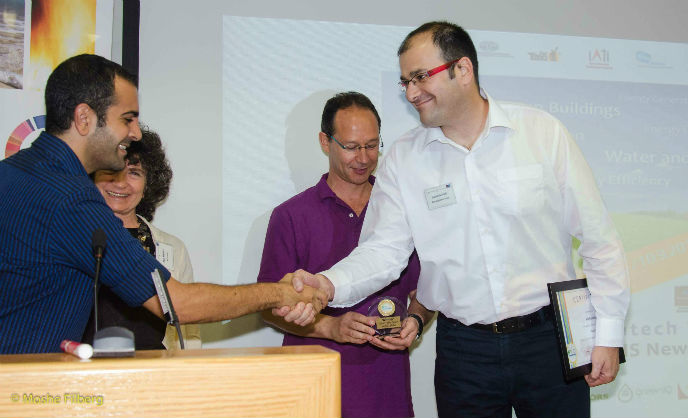 Data on the performance of each system is uploaded to the cloud daily to enable AutoAgronom to compare data from different farms and vegetation. Though the focus is now on the US and Chinese markets, the company’s technology is being used with 70 types of crops in 13 countries, including Israel, England, Spain, Turkey, Morocco, Peru and Colombia.

At every farm where AutoAgronom’s system is installed, a control field allows for easy comparison at eye level. “In corn, the most significant crop in the world, we see a 16% increase in yield and the plant is 50% heavier when our system is used,” Perry relates.

Recognizing a plant’s roots as the “purchasing department” of crops is not in itself a new idea. Another Israeli company whose product hinges on the wisdom of roots is CommonSensor, a wireless device that works with the automatic irrigation system to water crops only when they’re thirsty.

“There is a common factor between our technologies: measuring the water tension in the soil,” says Perry, who comes from a farming background in the Negev.

“However, AutoAgronom provides a holistic approach to meeting growth needs of plants. We measure water tension in varying depths, drainage from field, pH level, nitrate level and more. We then calculate oxygen availability in the roots, as we consider this the most critical factor to the plants’ development. Our automatic fertigation method utilizes all of the above factors when automatically deciding when and how much to water.”

The company holds two unique patents: one for measuring oxygen availability in the roots and the other for automatic delivery and decision-making.

Following its acquisition, AutoAgronom will maintain its main office and IP in Israel, Perry tells ISRAEL21c. Branch offices are planned in China and in California, where the greatest need has been identified.

Shenyang Yuanda Enterprise Group Chairman Kang Baohua said, “The system can help us farm on the sand, saline-alkali soil or even on the Gobi, which may restore underground water and help manage heavy metal and garbage pollution.”

Perry says AutoAgronom is now in discussions to identify a strategic partner in the American market.

“We are working on a business model that will allow early adoption of our technology. As farmers, we understand the cash flow constraints every farming operation experiences. Thus we intend to offer a leasing mechanism to growers, allowing them to install the systems through our ‘Fertigation as a Service’ model. Growers will be able to pay per acre of land, and over a five-year plan, according to expected economic benefits resulting from our technology.”