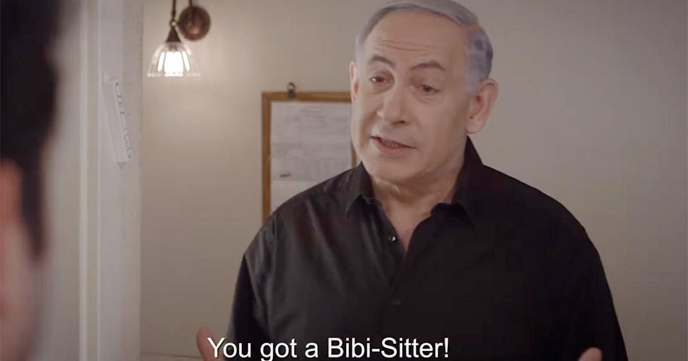 Facebook never set out to be a political battleground but that’s exactly what it has turned into during the run-up to the Israeli elections. Twitter-land is not far behind.

And while you might think new campaign videos popping up at a rapid pace would become overkill, voters eagerly anticipate the new videos as they try to outdo one another with clever puns, creative ideas and not-so-subtle jabs at their rivals.

Political statements and party promises are still important, but the language of getting the message out to the voters has changed completely. Gone are the days of broadcasts of live campaign speeches, jingles and official slogans.

Today it’s all about viral videos and self-satire. It’s not by chance that all the parties have sent politicians to primetime political comedy shows including Eretz Nehederet and Gav Ha’uma.

“The 2013 elections were a watershed moment, dividing old politics from new. That well-worn term ‘new politics’ didn’t necessarily refer to better, cleaner politics. It simply meant a different kind of politics. This was the first election campaign in which the Internet and social network revolution played such a dominant role,” writes political columnist Mazal Mualem. “We are now in the midst of a historic social network revolution, an upheaval so potent that it is changing the very face of our politics.”

Jewish Home party leader Naftali Bennett, who used social media as a stepladder in the last elections, set the ball rolling with his satirical campaign ad on his view of leftist defeatism titled  “Stop Apologizing” and featuring himself disguised as a Tel Aviv hipster.

He uploaded the video to YouTube and then posted it on Facebook. It was shared repeatedly, quickly went viral and won numerous satirical takes by others. The video was even picked up by international media.

Prime Minister Benjamin Netanyahu’s creative team also had people clicking “like” and “share” (as well as posting tons of negative feedback) with a succession of cheeky videos in which he was depicted as a kindergarten teacher for pint-size characterizations of his political rivals; a“Bibi-sitter” to be trusted with Israeli children’s future; and a defender against accusations of his wife’s overspending.

The Zionist Union took 50 Shades of Grey and converted it into 50 Shades of Black – blaming Netanyahu’s government for the housing crisis, employment, periphery communities living in bomb shelters, and the state of health services.

Meretz, Shas, and other political parties have also released videos to social media, resulting in response videos served up by the public that were equally cutting.

The comedy show Eretz Nehederet has had a field day with its skewering versions of the different videos.

Israeli journalist and video editor Noy Alooshe, a master of political music spoofs, hasn’t disappointed with his set of mash up videos of the leading politicians for this year’s election campaign.

The V15 campaign for government change has posted about a dozen anti-Netanyahu videos on its Facebook page, mocking statements by the Likud party throughout its election campaign.

Meretz, which may not exist come March 18 due to poor polling results so far, at least won on Twitter. American comedienne Sarah Silverman tweeted out her support for the Israeli leftist party.

While negative-positive feedback on all the campaign videos is to be expected, there are two videos the Likud party probably regrets posting: a short spoof of Islamic State fighters in a pickup truck who are told to “take a left” as a way to destroy Jerusalem;  and a disastrous clip in which it plops Hamas terrorists and Israeli civil servants together. Both went viral and garnered severe backlash.

The newspapers and television shows are brimming with political panels and poll results. Huge billboards with witty and serious slogans are looming over the country. But Facebook is still the main go-to place for political jabs.

Meanwhile, the day before the public casts its vote and the country can finally take a breather from all this disturbance, the “hipster” who started it all has returned for another few minutes of fame. This time, Bennett is shown where many politicians will probably go on March 18 — to therapy.

Eretz Nehederet published a hilarious social media wrap up of the elections. Watch it here.

What was your most memorable moment from this year’s election campaign?