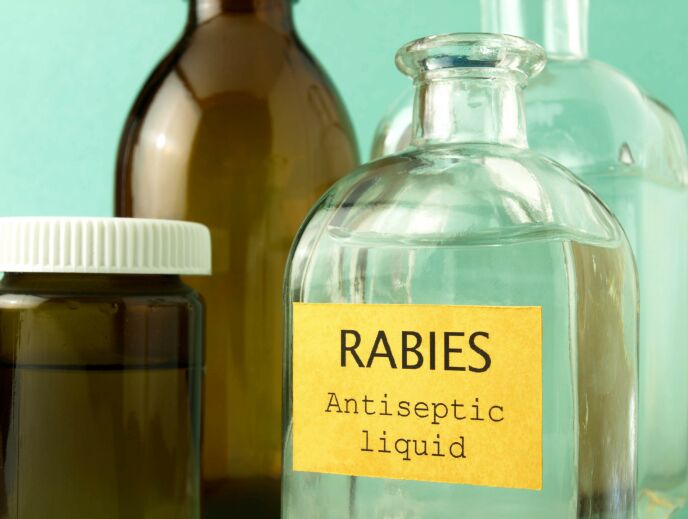 If you get bitten by a rabid animal, the rabies virus travels from the site of the bite all the way to your brain, where it multiplies and can be fatal without prompt treatment. A new study done in Israel in collaboration with German scientists shows how this happens, for the first time.

Unlike many other pathogens, which spread throughout the body via the heart’s blood-pumping action, the rabies virus depends on a less well-understood nerve-cell network that runs along the periphery of the body.

In an article published recently in PLOS Pathogens, the researchers explain exactly how the virus “hijacks” this transport system in peripheral nerve cells to reach the brain with maximal speed and efficiency.

Peripheral neurons, as opposed to those in the central nervous system, are highly asymmetric. The body of the cell has a long protrusion called an axon, extending to another nerve cell or to a target organ such as muscle tissue along a specific transmission route. Axons can measure several hundred times the diameter of the cell body, and have the ability to rapidly transmit electric impulses as well as molecular materials over these distances.

A team led by Eran Perlson of Tel Aviv University wanted to examine the details of how this transmission occurs. They set up a system to grow asymmetric nerve cells in an observation chamber, and used live cell imaging to track how rabies virus particles are transported along the axons.

“Our study shows that rabies virus can not only hijack the transport systems of the neuron, but might also manipulate the axonal transport machinery to facilitate its own arrival at the cell body, and from there to the central nervous system at maximum speed,” the authors summarized. 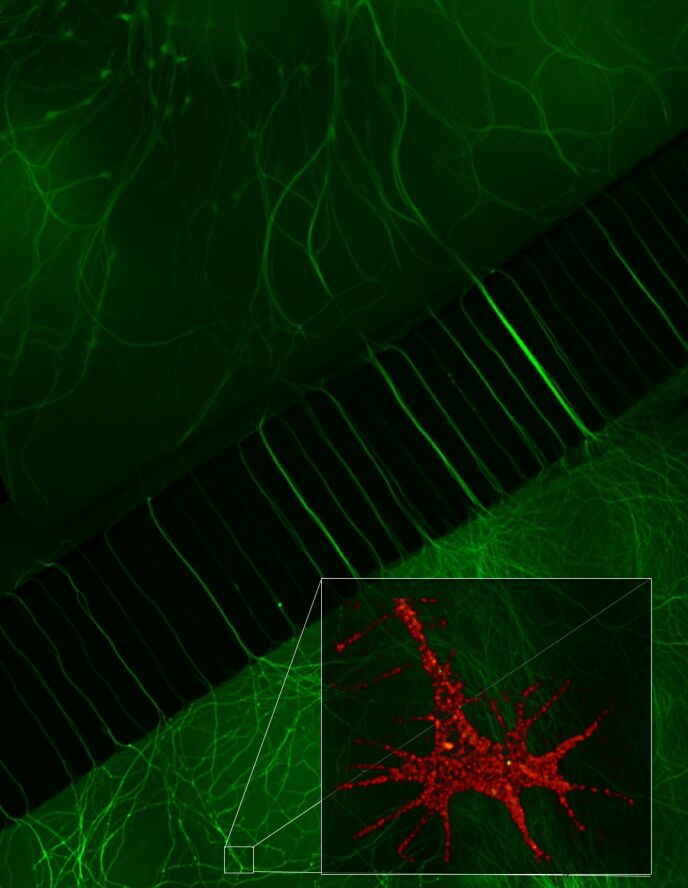 A rabies virus (green) binding the p75 neurotrophine receptor (red) at the tip of a sensory axon. Credit: Eran Perlson and colleagues

A sort of railway system

This new understanding could lead to a therapeutic approach to control the neuron transmission system to treat rabies as well as other diseases caused by viruses using the same pathway. According to the World Health Organization, more than 55,000 people die every year from the rabies virus, mostly in Africa and Asia.

The study focused on the p75NTR receptor, a protein found on the tips of peripheral neurons and known to bind a small molecule called NGF (nerve growth factor). When NGF binds p75NTR, both are taken up into the neuron and move in acidic bubbles called “vesicles” toward the cell body.

The researchers found that the rabies virus behaves very similar to NGF: It binds p75NTR, both are internalized, and subsequently are found in acidic vesicles that move toward the nerve cell body along a sort of railway system.

Rabies virus is known to be able to infect neurons in the absence of p75NTR. However, when the researchers grew nerve cells that had no p75NTR in their observation chamber, they found that virus transport along the axon is less frequent and much slower.

Transport independent of p75NTR was also more erratic, with a larger proportion of viruses moving in the wrong direction — away from the cell body and towards the tip — suggesting that p75NTR facilitates the directed fast movement of the virus.

When the researchers measured the speed of transport, they found that when the rabies virus is transported with p75NTR, it moves at about eight centimeters (a bit more than three inches) per day. Surprisingly, this is considerably faster (by about 40 percent) than the transport speed for NGF, the regular partner of p75NTR.