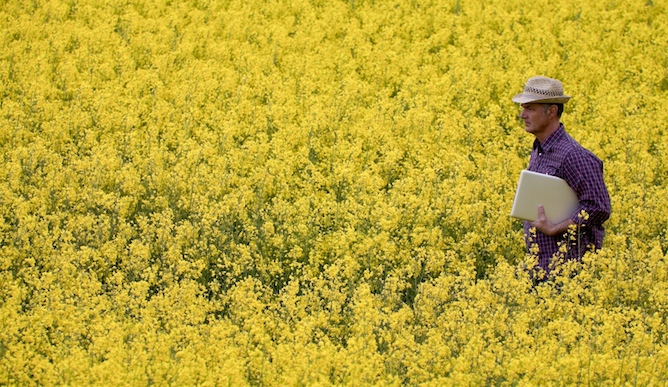 A new technology for better farming decisions. Image via Shutterstock.com

A cutting-edge agricultural technology from Israel is hitting the worldwide market after showing that it helped farmers in a pilot project lower water usage by 30 percent and fertilizer consumption by 15%.

The new uManage platform for advanced crop management is made by Netafim, the Israeli company whose drip- and micro-irrigation solutions have been revolutionizing farm productivity and sustainability across the world since 1965.

With uManage, farmers can compile and analyze data, as well as monitor and record irrigation/fertilizer performance and yields. The software enables growers to make decisions based on analysis of factors such as wind direction, weather forecast, temperature, radiation, soil moisture and fertilizer.

The pilot project, using a beta version of uManage, was carried out at dozens of farms in countries including the United States, Israel, Italy, Holland, Brazil and France.

“The project showed how uManage facilitates their work, improves their crop quality and yield and, above all, reduces their water and fertilizer consumption,” says Lior Doron, Netafim’s director of crop management technology.

Optimizing decisions in the field

“Drip irrigation is a very precise system regarding flow rate, and farmers need a ‘brain’ controlling the system to make sure they irrigate at the right time and in the right amount,” Doron tells ISRAEL21c.

Existing solutions were not making the grade in farmers’ opinions.

“There are a lot of parameters influencing decisions of irrigation and fertilization, and growers are always concerned that their decision support system [DSS] doesn’t consider everything,” says Doron. “Yet growers don’t want everything to be automatic. They’d rather get suggestions so they can make their own decisions.” 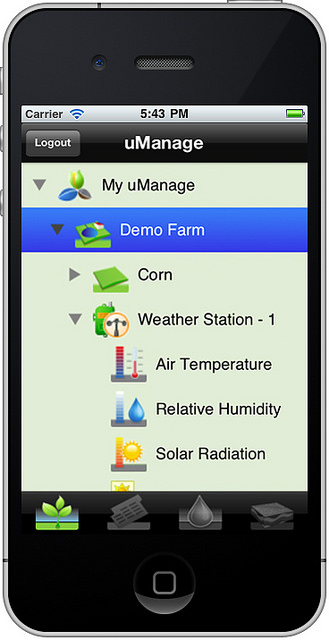 Netafim began developing the uniquely all-encompassing, open-interface uManage platform about three years ago. It’s available in the form of software as a service (SAS) for $330 per year.

The platform sends continuous data between the irrigation controller and sensors in the field and the monitoring station in the office. In coordination with weather stations, algorithms calculate parameters such as soil wetness and the dew point, suggesting when farmers should start or stop irrigation. It will even help them detect leakages or other problems in the irrigation infrastructure, and allow them to take action remotely.

A platform designed to grow

Sales of uManage began only in May, yet Netafim is already planning the next iteration.

“We will soon be upgrading uManage with a decision-support module that will advise farmers as to which crops should be given highest priority, while considering future parameters such as annual weather forecast. In this way, the system will actually optimize the farmers’ decision-making process.”

Netafim also plans to approach suppliers of seeds, fertilizer and pesticides to integrate their individual management systems into uManage so it will truly be a one-stop-shop solution for growers.

“We have knowledge only in irrigation, so we designed uManage with an open interface so others can join in to bring growers what they need,” Doron says.

Doron reports “huge interest from other countries.” He points out that many growers depend on the advice of experts who aren’t local, and the uManage platform will allow them to share real-time data via smartphone with their advisers regardless of location.

The Israeli company is a partner in the FIGARO (Flexible and Precision Irrigation Platform to Improve Farm Scale Water Productivity) European-wide research project co-funded by the European Commission, which aims to increase water productivity in major water-demanding crops and develop a cost-effective precision irrigation platform.

“We are building a DSS together with partners from Europe — universities and companies — to take weather forecast images and automatically suggest how much to irrigate based on those photos,” says Doron.

Netafim has 27 subsidiaries, 16 manufacturing plants and more than 4,000 employees worldwide, delivering its solutions for irrigation and crop management to customers in 110 different countries – and not just for agriculture but also for landscaping and mining applications.

UNCOVER ISRAEL - Get the ISRAEL21c
Weekly Edition free by email
Sign Up Now!
Bring Israel's story to life.
Millions of people around the world rely on us to gain a deeper understanding of Israel. We are the trusted source for original content you won't find anywhere else.
You can make a difference. Donate today to support journalism that brings Israel’s story alive.
SUPPORT ISRAEL21c
Read more on:   Environment, Agritech