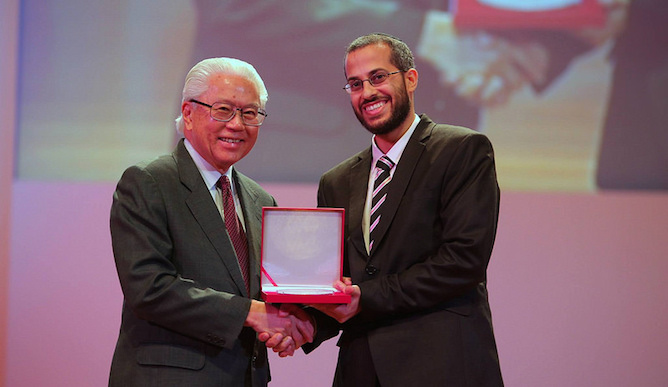 ISRAEL21c met with Kabessa to find out more about the biosensor he’s developing at the Hebrew University of Jerusalem’s Peter Brojde Center for Innovative Engineering and Computer Science.

Learning about his work is challenging, because the 33-year-old father of four specializes in nanotechnology that you can’t see with the naked eye.

Nevertheless, last December he used a scanning electron microscope to photograph the hanukkiyah (Hanukkah menorah) that he and fellow doctoral candidate Ido Eisenberg fashioned out of a bit of polymer the size of a speck of dust.

Touted in the press as the world’s smallest hanukkiyah, it was a playful test of Israel’s first Nanoscribe, an advanced 3D microprinter from Germany that will enable Kabessa to put all the components of his award-winning biosensor into a micro lab on a chip.

The winning proposal occurred to him while working on a project to map buried landmines using genetically engineered bacteria and an optoelectronic remote sampling system, led by Hebrew University professors Aharon Agranat and Shimshon Belkin.

“If the bacteria are spread on a minefield, they will sense explosives, and an airborne vehicle will detect the optical signal they produce,” Kabessa explains.

He realized that bacterial biosensors could also detect pollutants in waterworks, and began designing optoelectronics for such a system. His novel methodology fit the bill for the Singapore Challenge at the GYSS, a five-day program where bright young researchers meet with eminent scientists to discuss technologically innovative solutions to global challenges. The 10 proposals judged most promising get to vie for the prize.

“There were four other students from Hebrew University at the competition, and there were participants from the Technion, the Weizmann [Institute of Science], Ben-Gurion University and Tel Aviv University,” says Kabessa, whose work is supported by a Bryant and Lillian Shiller fellowship and the Cambr Fund in the United States.

“What’s interesting is that five of the 10 finalists were from Singapore and three were from Israel. That is quite a remarkable achievement, considering there were students from MIT, Cambridge, Harvard, etc. — the best universities.”

Though the $100,000 is sitting in his bank account to use as he wishes, Kabessa is contributing it toward furthering the biosensor research.

“The truth is, I didn’t do all this work alone,” he says. “My supervisor, Prof. Agranat, had the basic idea and gave me so many tools to work with. And there are very talented students in the lab who helped me in all levels of the project. So I thought the right thing to do is to invest this money to further develop the idea.”

The religious son of immigrants from Yemen and Morocco, Kabessa says he goes by the Talmudic maxim that “if money is meant for you, you’ll get it; and if it was not supposed to get to you but it did, you’ll lose it somehow. I believe that everyone gets what he deserves, and I had to think whether this money was really mine.”

Like most young families, the Kabessas certainly could use extra cash. Yael Kabessa, Yossi’s wife, cannot work outside the home because of the intensive care needed for their eight-year-old son who has severe cerebral palsy. The couple lives in Nof Ayalon in central Israel, and has three younger daughters as well.

Growing up in Ashkelon, Kabessa always wondered how it was possible to warm food by pushing buttons on a microwave, or to start a car by turning a key. He wanted to understand the underlying science. “I was very curious about that, and it drove me to go into physics or electrical engineering.”

The decision for physics was made at a Hebrew University open house, where a professor explained that electrical engineering is for people who enjoy building the same LEGO structures over and over, while physics is for those yearning to invent a whole different LEGO system.

“At the end of my first degree, I was still motivated to understand how everything works, and maybe even invent something new, so I checked into the master’s program in physics,” Kabessa says.

When he heard Agranat lecture about applied physics, he knew he’d found his niche. Agranat steered Kabessa to the biosensor project, about which he recently published a paper that was selected to be featured in the Global Medical Discovery Series, an online platform for breaking news about scientific discoveries. Only a handful of some 20,000 papers published weekly are reprinted in the series.

Kabessa’s challenge is to balance research with family obligations and some occasional hiking, reading or guitar-strumming.

“I try to let my wife and kids have all the time they need, and not to let all my duties tear me from my more basic duty of being a husband and father,” says the veteran of the army’s armored division. “I always have more things I want to see and investigate, try and measure, and there’s not enough time for everything, so I do my best.”