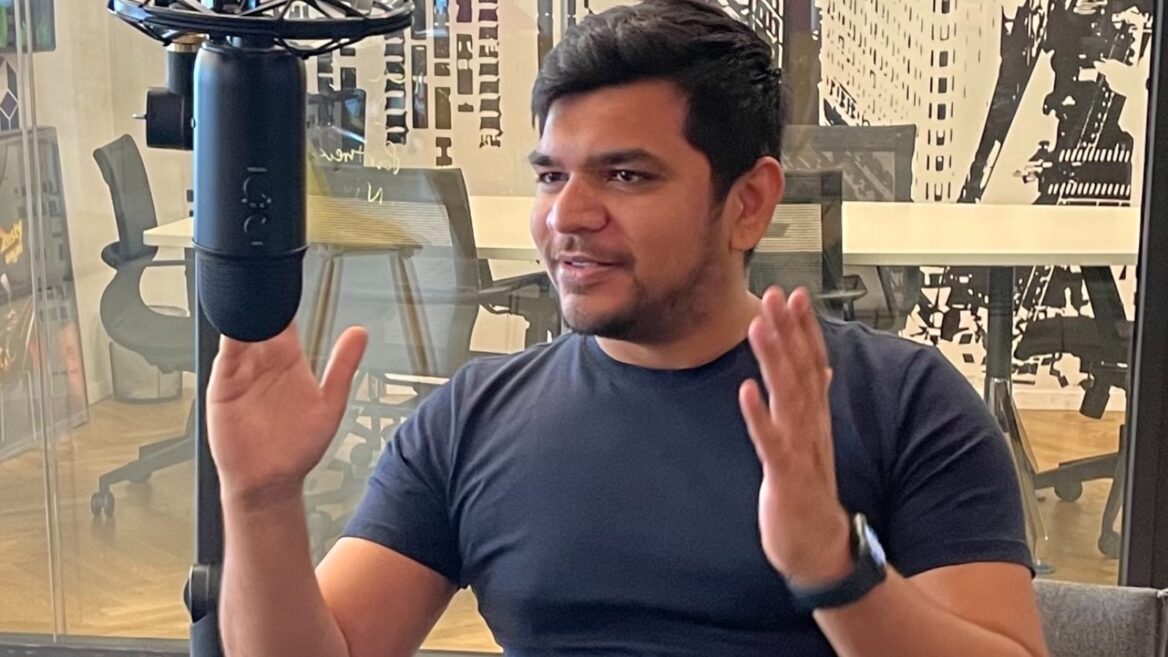 Pratik Thakker, a Hindu immigrant to Israel and founder of Webzoly, is a significant social-media influencer. Photo courtesy of Pratik Thakker

On Pratik Thakker’s first day as a new immigrant to Israel in 2014 – which was also his first day in Israel ever – he felt so overwhelmed and homesick that he landed in the emergency room with an anxiety attack.

“The beginning was really challenging, and challenging phases sometimes pull you down so much that they may leave you helpless,” he says.

For two years, he longed to go back to Mumbai, but his wife kept him strong and he recovered.

“Now I’m so grateful that I did not give up. If I had gone back, my story would have been completely different.” 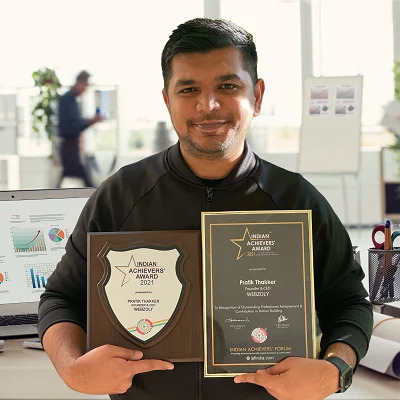 Pratik Thakker won the 2021 Indian Achievers Award from the government of India.

He has become a significant social-media influencer whose posts explore the future of work.

“Lesson learned: If you stay consistent, you will be successful,” he tells ISRAEL21c. “We are all capable of more than we believe in and we are stronger than our fears.”

From India to Israel

As a boy, Thakker sold everything from firecrackers to pickles, later becoming a stock analyst.

At age 16, he fell in love with a classmate, Nancy Pezarkar, from Mumbai’s small Jewish community. That was nearly 16 years ago. 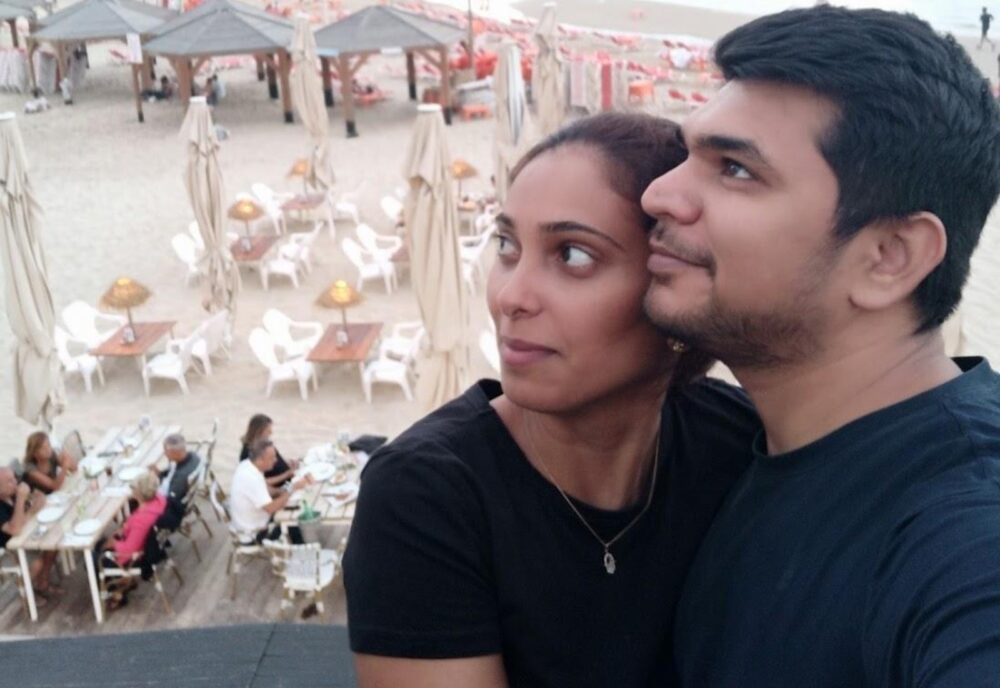 “When we got married, Nancy was working for El Al in Mumbai and used to travel to Israel a lot. I was passionate about technology, and I wanted to move to the United States. But she inspired me to seek opportunities in the startup nation. We decided it would be an amazing place to build our careers.”

And that’s how they ended up in Israel.

The first few months, Thakker took cleaning jobs while strategizing his entry into the high-tech ecosystem. To get the ball rolling, he heeded his businessman father’s advice to offer something of value for free.

“I posted on Secret Jerusalem that I’ll help people who want to build a website, for free. I had seven customers in the first three months, and their testimonials got me my first high-tech job as a webmaster,” Thakker says. 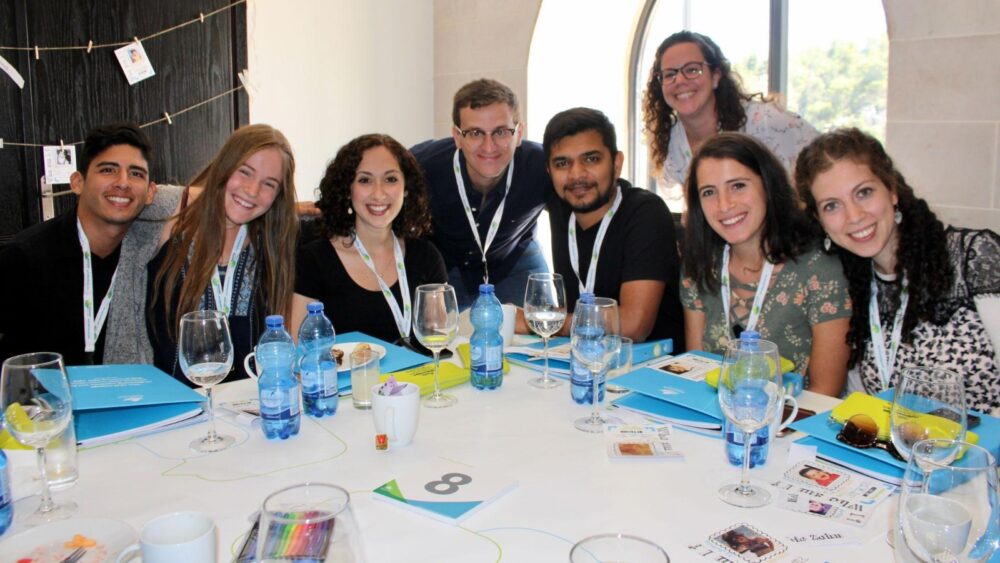 Meanwhile, he built up his Webzoly clientele on the side. It evolved into outsourcing because Israeli tech companies desperately need virtual talent and Thakker was well positioned to help due to his connections in India.

“Once I felt I was making more money in my side business than on my job, I decided it was time to focus on it full time,” he says. His wife quit her job at the Indian Embassy to join him.

“The lesson is that you can play it safe and build your business while you have a job. It just takes time.”

The company now employs 21 people inhouse plus 80 more in several countries working for Webzoly client businesses across the globe.

Even the best product won’t sell unless people know about it, so Thakker turned to professional networking website LinkedIn to build brand recognition for Webzoly.

With about 800 million members, LinkedIn is the international go-to for business leads. But Thakker approached it a bit differently than most.

“One of my recipes for success is consistency. So I announced to the world that I will post regularly on LinkedIn for 1,000 days, no matter what.”

“There is a point where you feel like giving up, but because of my commitment to consistency, it worked.”

When we spoke in mid-March, Thakker had been posting for more than 800 days and had become the No. 1 LinkedIn influencer in Israel with over 100 million views.

“LinkedIn’s team reached out to help me because they recognize my efforts. We’re building a creator community together,” he says.

“I’m inspiring and educating a lot of people to create content on LinkedIn. I spent a lot of hours on the platform and gained a kind of mastery of how to do it correctly, so you don’t have to spend all the time I did to achieve success.”

According to the Indian Embassy in Israel, most of the approximately 12,500 non-Jewish Indians in Israel work as caregivers. About 1,000 are students or employees in IT or the diamond trade.

Thakker emphasizes that Israeli society has fully accepted him as a Hindu. “I really feel there is no racism here and I’ve had wonderful opportunities,” he says.

The culture shock that nearly sent him packing has mellowed into a sincere admiration of Israel’s straight-shooting, “work-hard, play-hard culture,” he says.

“It’s balanced well between work and family, weekdays and Shabbat. I didn’t see that anywhere else in the world,” Thakker says. He, too, finds that refraining from business on Saturdays helps him stay more productive during the week.

He observes that the “work hard” part of the equation is an Israeli drive to “improve and innovate every day because they know the world is changing fast.”

Clients seem to appreciate what he brings to the table.

“He always steps up and does it with great positive energy and a big smile,” she says.

“Right from the get-go, Webzoly became an organic extension of our marketing team. I feel that Pratik and his team really get what we do and how we make a difference in the space and what’s important to our clients. They are instrumental in communicating that in digital and email campaigns.”

Thakker is preparing to launch a new venture, Insidea, an automated platform for recruiting, hiring and managing remote workers.

“I love how Israel contributes to a better world through technology, science and medicine, and I proudly promote Israel for this,” he says.

UNCOVER ISRAEL - Get the ISRAEL21c
Weekly Edition free by email
Sign Up Now!
Bring Israel's story to life.
Millions of people around the world rely on us to gain a deeper understanding of Israel. We are the trusted source for original content you won't find anywhere else.
You can make a difference. Donate today to support journalism that brings Israel’s story alive.
SUPPORT ISRAEL21c
Read more on:   Culture, People, Business, Pratik Thakker, India-Israel